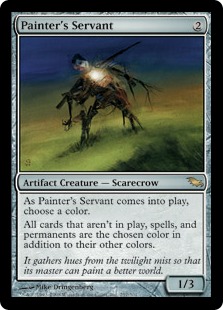 If you missed Pro Tour Oath of the Gatewatch over last weekend, Eldrazi dominated the event putting six decks into the Top 8 along with some insane win rates overall. For better or worse, Oath of the Gatewatch had perhaps the best showing of a new set in a Modern Pro Tour. While there was a few variations in the 75, all the Eldrazi decks took advantage of a few key features - the new "cheap" Oath of the Gatewatch Eldrazi and their explosive sol lands. Eye of Ugin and Eldrazi Temple create some busted draws, and there's a lot of talk about banning them. But for now, you'll likely need to pack some hate for the Eldrazi menance - though much like Affinity you have to accept you can't beat their nut draws.

The 1/3 body is a little fragile to your opponent removing it, but Painter's Servant is by far one of the cuter interactions for fighting the deck. Eye of Ugin and Eldrazi Temple pump out colorless Eldrazi spells, but Painter's Servant forces them have a color so they can no longer apply. Granted this won't stop them from eventually casting them, but it does force them to play a fairer game. Sadly, or thankfully, Grindstone isn't legal in Modern to simply mill their whole deck.

Edit - @Vyolynce reminded me that while Grindstone isn't, Sphinx's Tutelage is legal. It can't hit the whole library in one go because of lands, but it's potentially pretty fast.

The idea here is to use Reality Smasher's ability to your advantage and at least mitigate the two-for-one it generates along with cheating on mana. Imagine a scenario like after declare attackers Path to Exile your Reality Smasher, discard Loxodon Smiter to the field, and block your Thought-Knot Seer. Not necessarily a blow-out, but it helps to keep pace with them. You trade a Path to Exile and a Loxodon Smiter for their two creatures and then remain even on Thought-Knot Seer's effects.

While the Eldrazi deck does have some disruptive elements and some insane draws, at the end of the day their still just a creature deck. If you can survive long enough, and Thought-Knot Seer doesn't strip them at a key moment, wrathing their board is a nice way to clean up and generated some advantage. I played a UW Control list last night that had decent success using this style. It played a full 6 wrath effects with 4 Supreme Verdict, 1 Wrath of God, and an Elspeth, Sun's Champion.

For the longest time colorless mana wasn't a specific thing, but now the distinction is pretty important. Turing an Eldrazi player's lands into Mountains not only shuts of the double mana, but unless they have a Waste in play all their lands specifically make Red mana, not colorless. There are still a few creatures and spells they can freely play that only require generic mana, but it does cut off many of their best cards.

A few versions of the Eldrazi deck potentially still have ways to win, like the ones running Endbringer, but for the most part if you can shut them out of the combat step you can't lose. You'll still need an answer to them eventually trying to Ratchet Bomb all your prisons away after sideboard, but the colorless and mono-black version have very limited answers to enchantments and artifacts.

You need to be able to survive to deploy it, but once it's in play it's a bit of a monster for the non-Drowner of Hope Eldrazi decks to deal with. Deathtouch means it will always trade, even if they Dismember it in combat, and the lifelink helps to stabilize. They could potentially Ratchet Bomb the tokens, that's still not a bad exchange if it traded for cards on the front end already.

The big question will be whether or not these answers can be easily slotted into decks that still have a reasonable match-up against the rest of the field. Most folks are not going to jump ship and will continue to play the Modern decks they have invested in already.

What do you think about the new Eldrazi deck? Should it get pieces banned? How long should WotC wait?