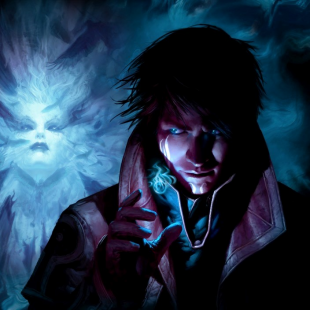 Shadows over Innistrad is almost upon us with prereleases happening next weekend and the set dropping April 8th. I'm looking forward to judging some probably massive prereleases. Folks, myself included, are really hyped for this set. From the card design to the art to just featuring some powerful constructed cards, all signs point to Shadows over Innistrad being one of, if not the, best set in recent memory.

In-addition to some fan favorite characters and tribal elements, one of Innistrad's defining mechanics was double-faced cards. Rather than using the older flip card method, these cards transformed by physically flipping over to another printed side. Double-faced cards are returning with Shadows over Innistrad, and I got the chance to bounce some questions off R&D about bringing the mechanic back and about Shadows over Innistrad in general.

Escapist: Double-faced cards were quite popular and eye-catching the first time around. How popular is it compared to other mechanics and themes like say multicolored or morph?

Ethan: Double-faced cards (DFCs) were well-received in general the first time around, but they were quite polarizing. While some players loved them, others hated them. Multicolored cards are one of the most popular mechanics we've ever done, easily exceeding DFCs. DFCs were rated around the same as the Morph mechanic; they are both mechanics that were popular, but not all-time greats.

Escapist: Were there any challenges or hurdles that needed tackling in order to bring double-faced cards back for Shadows over Innistrad?

Sam: When coming back to Innistrad, we knew we needed to have double-faced cards, as they were such a huge part of the first set's identity. While there are a ton of logistical things that we needed to figure out internally (how many cards were in the set, how to organize the rarities, and how they would drop into packs), the main struggle was creating both a set and an environment that was friendly to the cards. While in the end we did change the rule on converted mana costs of the back sides being zero, it meant things like keeping Ratchet Bomb-like effects out of standard, and limiting how punishing the bounce spells in the format would be against DFCs. For limited, we wanted to construct an environment where the Werewolves would be fun, and not just punishing for people who missed land drops. That means a lot of cheap spells that give you clues so you don't feel horrible about using them to control the werewolves, but you are still paying a real cost.

Escapist: What takeaways have emerged about designing double-faced cards since they first appeared? Aka the Delver of Secrets question.

Sam: I actually think Delver of Secrets is a great example of how double-faced cards succeeded in the first Innistrad. It was a bit stronger than we expected, but it did something that we wouldn't normally do on a single-sided card - a permanent +2/+1 bonus with flying. When making DFCs this time, we looked hard for cards that we would at the least struggle making on a single face. That means a lot of getting uneven power and toughness bonuses, or changing very dramatically in abilities. While we want to make sure each DFC tells a story, we can always tell the vanilla +1/+1 story on a card by putting a counter on it. We don't to do DFCs very frequently, so it was important to make the most out of their presence in the set.

Escapist: Will the distribution of double-faced cards be different than it was before?

Ethan: We decided that we wanted to have a few more DFCs per pack than in original Innistrad block to provide more spice and variety. 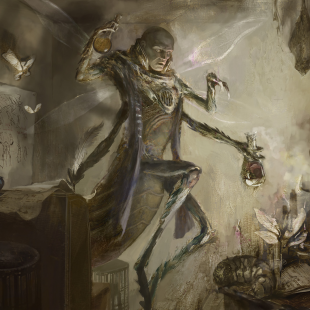 Escapist: Semi-related to the last question. In total, how many cards in the set are double faced?

Dave: There are more double faced cards in this set than in the original Innistrad set. The number of uncommon DFCs was increased to provide a wide array of cards with this range of complexity for our players and to provide extra variety for limited.

Escapist: It was recently announced that some rule changes for transforming and double-faced cards are happening. Can you explain these and why they were important to revise?

Dave: There were three significant changes. I'm summarizing, but you can find more info from our Shadows over Innistrad mechanics article by rules manager Matt Tabak.

I. The converted mana cost of the back face of a DFC is now based on the mana cost of the front face. We generally felt this would be a common expectation and we didn't want unnecessary downside as a part of fulfilling the transformation. For example, we felt that if you invest in a card like Archangel Avacyn/Avacyn, the Purifier, transforming shouldn't then make her weak to removal that uses converted mana cost, like Abrupt Decay or Ratchet Bomb.

II. There's now a rule that if you're told to put a card that isn't a DFC onto the battlefield transformed, it just stays where it is. This change was largely made so that we could keep cleaner templates on cards and avoid development issues with Clone variants and cards like Loyal Cathar, where you could previously keep sacrificing the Clone variant and having it return over and over.

III. If a DFC has an activated or triggered ability that transforms it, that permanent transforms only if it hasn't since the ability was put on the stack. This change again let us simplify some templating on cards. It helped us avoid some unintuitive game situations where a card might not end up with the face up you expect. It also allowed us explore cards that could reward the act of transforming where we could better control how often that might occur.