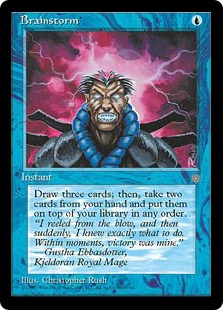 Last week we discussed the Stack and Priority. We've got a bit more heavy lifting to do today with State-Based Actions, but first a Quiz!

When Brainstorm resolves, Player A draws both cards from his Library, then is unable to draw a 3rd card. He puts 2 cards from his hand on top of his Library as instructed by Brainstorm. After resolution, and before any player receives Priority, State-Based Actions are checked and Player A loses the game because he tried to draw from an empty Library, even though there are currently cards remaining in the Library.

Let's check out a simple example of State-Based Actions:

You control Grizzly Bears enchanted with Rancor. Your opponent casts Shock targeting your bear. First, as per last week, Shock is put on the Stack and resolves when both players pass Priority, dealing 2 damage to Grizzly Bears. The 2 damage is marked on the bears. Before either player receives Priority, State-Based Actions are checked, and the game sees that a creature with Toughness 2 has 2 damage marked on it. The Grizzly Bears are destroyed (704.5g), though Regeneration can replace this effect. When the Bears are put into the owner's Graveyard, Rancor is still on the Battlefield, though is not attached to anything. The next time a player would receive priority, State-Based Actions are checked and Rancor is put into its owner's Graveyard (704.5n) and its ability triggers. Since no more State-Based Actions must occur, the ability is put onto the stack. Once both players have passed priority again, Rancor's ability resolves and it is returned to its owner's hand.

The fact that State-Based Actions happen outside of the Stack is specifically important in certain cases such as Regeneration and life gain. If Regenerate hasn't resolved before damage is done then you're too late to save your critter. Let's say you control a Drudge Skeletons, for example. Your opponent Lightning Bolts your skeleton, to which you respond by paying B to Regenerate. In this case, your Regenerate ability is on top of the Stack and will resolve before the Lightning Bolt, thereby replacing the destruction event when State-Based Actions are checked. If they responded by casting another Lightning Bolt, however, and you are unable to Regenerate again, the damage would be dealt to your skeleton with Regenerate still on the stack. Before Regenerate can resolve, both players must pass priority but before either player would receive priority, State-Based Actions are checked and your Drudge Skeletons would be destroyed.

Another similar example here would be enchanting a Drudge Skeleton with Dead Weight. In this case, the Regenerate ability won't actually help since the skeleton's toughness is reduced to 0. "704.5f If a creature has toughness 0 or less, it's put into its owner's graveyard. Regeneration can't replace this event." Since the creature is not being destroyed, but rather simply being put into its owner's graveyard, you can't Regenerate through this effect. It's a minor point to be sure, but can be very relevant.

Now let's take a look at some life gain and see what we can uncover. First let's look at Lifelink. This is a Static Effect which causes a source's controller to gain life whenever damage is dealt. This ability doesn't use the stack; it causes damage dealt to have an additional effect. So your Flensermite, when dealing damage to a creature, will deal 1 damage in the form of a -1/-1 counter and you'll gain 1 life simultaneously. Similar effects which don't use the keyword Lifelink, however, will tend to use the stack, so you must be more careful in how you play them. Armadillo Cloak, for example, causes you to gain life whenever the enchanted creature deals damage. It sounds just like Lifelink, except in this case you can enchant your opponent's creature with the cloak, thereby virtually negating any damage it can deal to you. I use the term 'virtually' here because in case the creature does enough damage to reduce you to 0 life, before the 'gain life' ability can resolve, State-Based Actions must be checked, and you will lose the game before you can regain the lost life! Soul Link is another fine example for this.

Well, I think that's enough of the heavy stuff for now. I hope you've found the past couple of weeks informative! Next week we'll pick back up with a casual decklist and some construction tips. Have a deck to share? Post it in the comments!