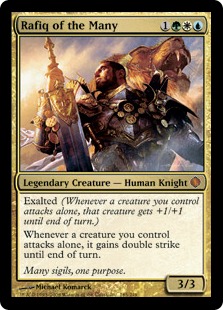 Magic: the Gathering sports a seemingly endless variety of formats, each offering their own unique challenges in deck building and play. From where I stand, I would say the most inspiring of these formats is EDH, Elder Dragon Highlander, a fan-made format which was eventually adopted by WotC and branded Magic: The Gathering - Commander. The format brought such a loyal fan base that Wizards went so far as to create an entire series of Commander decks. EDH is a heavily social variant of Magic, which tends to be played in groups rather than head-to-head. The format favors interaction between players such as the mechanic Join Forces, which was introduced in new Commander-exclusive cards like Minds Aglow.

The Commander may be any Legendary Creature from Magic's history excepting a very small list of banned Commanders. The format likely got its name from the Legends expansion's Elder Dragons such as Nicol Bolas and Arcades Sabboth which were the original Commanders. Your Commander will define what colors you can include in your deck, as well as be a readily-available resource for you to lean on during your games. Your Commander resides in the Command Zone, where you can cast it as though it were in your hand. Any time your Commander is put into the Graveyard or Exiled from anywhere, you can return it to the Command Zone instead. Each time you cast your Commander from the Command Zone his cost increases by 2, so it is best to not let it die often lest it become too expensive to recast.

After you've chosen a Commander, it's time to start assembling your Deck. EDH deck construction rules are fairly simple, but offer a unique building challenge. First off, your deck must consist of exactly 100 cards, including your Commander. Your deck may only contain mana symbols that appear on your Commander, either in its casting cost or rules text. For example, say your Commander is Rafiq of the Many then you may not include Forbidden Alchemy in your deck, since its Flashback cost includes the Black mana symbol.

Finally, the real kicker of deck construction; you may only include one copy of each card, excepting Basic Lands. This structure is called Singleton or Highlander ('There can be only one') and offers up some much needed variety in gameplay. As you know, in typical deck building you strive for consistency by including up to four of each card. In EDH, however, you must look for consistency by including different cards with similar effects(as below with Swiftfoot Boots/Lightning Greaves.) Tutoring (searching your library for a specific card) becomes dramatically more powerful in an EDH setting because of the lost consistency in Singleton deck building. You can construct Singleton decks in practically any format (Block Constructed may be a little too limiting) with a similar effect on variety in games, so if you'd like to get some practice before diving headlong into EDH, then Singleton Standard may be a good place to start.