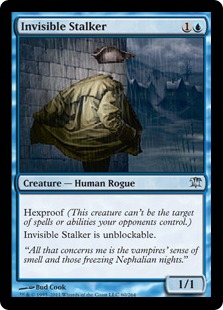 Once upon a time I envisioned Invisible Stalker dominating competitive Standard. I took my shot at it and missed with a Blue Black Control build. Since then, others have had a similar idea to much greater effect. Check out the decklists featuring Invisible Stalker! In October only 11 lists that performed in States 2011 featured Invisible Stalker and only a smattering of MTGO decks feature the card all the way through December. Then in January you see dozens of 4-0 records, and plenty of Top-8's. Of course it saw some minor play in other decks, like Puresteel Paladin builds, but almost invariably it was a UW Mage-Blade deck that performed well with Invisible Stalker. The burning question now is "where did I go wrong?"

To this I would respond simply "Tempo." My deck sought to play a long control game against a field of more aggressive decks. I spent most of my resources trying to handle the opponent's threats, and rarely had much opportunity to get my own creatures into the action, much less defend them with a wall of Mana Leaks and Vapor Snags, as is the game plan with many of the Mage-Blade decks out there now. Those decks you've seen above running Invisible Stalkers know what I failed to understand: If you can't beat them, join them. These decks are fast out of the gate, with first turn Delver of Secrets often leading to a 3/2 flier on turn two. This requires an answer and consumes the opponent's resources lest it end the game on its own. This then provides options. While the opponent is trying to deal with your Delver, you could advance the board position by playing another creature, like Invisible Stalker, or you can keep mana up for Mana Leak to defend your existing threat. I'm no expert on Mage-Blade, so I'll avoid getting into too much detail on what I'm unfamiliar with, but suffice to say, once it has a threat on the board, these builds can quickly sift through a deck dumping tons of Instants and Sorceries into the Graveyard with the likes of Gut Shot, Ponder and Gitaxian Probe. Once a Runechanter's Pike hits the board, it seems like it will be giving a minimum +3/+0 and that only goes up as the game goes long.

It is fairly evident from these decklists that a control shell is not the right home for Invisible Stalker. The card seems to thrive in a faster, tempo-oriented deck, rather than a long grinding control deck. With all of that said, where can we expect to see Mage-Blade evolving from here, given the release of Dark Ascension? Again, I'm no expert, but a few things jump out at me. Artful Dodge helps keep Geist of Saint Traft on the offensive, even against a field full of blockers, as you'll see with the tokens decks that seem primed to spring up. It plays well into the tempo of the deck, getting in for 12 points of damage over two turns, assuming the Angel goes unchallenged. Dungeon Geists may be a little high on the mana curve to see much action in Mage-Blade, but it taps down a creature for as long as it stays in play and offers a 3/3 Flying body to boot. As a flier, this guy carries equipment pretty well, and keeps his victim on the board in case of a sweeper, unlike Fiend Hunter, who's prey comes back after a Day of Judgment or the like. 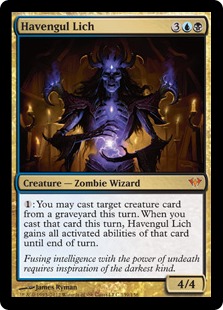 A: Yes. Each time the Perilous Myr changes zones, it becomes a new object and loses all memory of its former self. As such, you will need to pay to activate Havengul Lich's ability each time you want to recast Perilous Myr from your Graveyard.

400.7. An object that moves from one zone to another becomes a new object with no memory of, or relation to, its previous existence.

This week I'm introducing a new section, Question of the Week. Here I'll pose a rules or gameplay question for you to mull over and we'll take to the forums to discuss the answer! Like the Q&A, if you have any questions you think would make for a good Question of the Week, please submit them either in the comments below, or via PM to encaen! We'll start off simple this week and ramp into more challenging questions going forward.

Question of the Week:

In order, what are the steps to casting a spell?