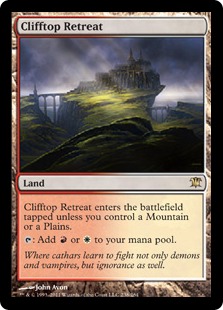 Whenever I start brewing a new deck, the first thing I like to do is come up with a theme, a combo, or some other binder to tie the spells together. Whether it's a Tribal deck like Zombies, a theme deck like Metalcraft, or a combo deck like... huh, it's been a while since I made a combo deck. In any case, that's the first thing I do. Then I look to round out my core spells with utility spells that will help the deck thrive in a non-solitaire environment: Kill spells in Black, Counters in Blue, and so on. Finally, once I've got 36 or so spells lined up for one last check, I start to consider my mana base. The fact that building my mana base is an afterthought in most cases is problematic, and I decided to start doing some extra reading on the subject to see if I could shore up this aspect of my deck building skills. Sure enough, the internet is absolutely awash with articles about Land in Magic, but the chaff can be hard to separate from the wheat, so I thought I would try to do some of that work for you, and present to you what I found. I may revisit this in more detail another time but, for the moment, I shall simply present an overview of my recent research.

Rule Number One: Feasibility
First things first, as per tip number one here, "Make sure your deck is at least reasonable for the format." In an Innistrad Block Constructed Deck, for example, you'll only have access to the enemy-colored dual lands from Innistrad, such as Woodland Cemetery which can make it particularly tricky to run something like Naya (Red White Green) since the only dual land you'll have available is Clifftop Retreat. Without much mana-fixing (spells like Birds of Paradise and Rampant Growth which can help provide mana of whatever color you might need at the moment) you may find it very difficult to run one of the more traditional three-color combinations without running into major mana issues. That's not to say it's impossible, of course, as there are options in Evolving Wilds and even Shimmering Grotto, but consistency is going to be an issue no matter how you slice it. So, again, the first step is to make sure that your wild brew is going to be feasible given the restrictions of the format.

Once you've decided that your deck is, in fact, feasible, then it's time to start brewing. Make your spell choices, build out your shell, and save the mana for later. Given how dependent your land choices are on your spell selection, it is nigh impossible to build your mana base first, and construct your deck to suit. Once you've got your deck constructed sans-land, it's time to catalogue your spell choices. You'll want to take note of three distinct sets of information. First your mana curve or, loosely put, the number of non-utility spells in your deck corresponding to each Converted Mana Cost(CMC.) For instance, Grizzly Bears goes in the 2-CMC slot because you're likely to want to cast it on the second turn. Doom Blade does not go into the 2-CMC slot, since it is a utility spell that you're going to cast when it is strategically optimal, not at your first opportunity. For example, imagine a deck with a mana curve that looks like 9,8,8,11, at the 1, 2, 3, and 4 CMC slots respectively. Given an appropriate mana base to work from, this deck will fairly consistently curve out where it drops a 1-drop on turn one, 2-drop on turn two, and so on through turn four. Once you've got an idea of what your mana curve looks like, take stock of the color requirement for each spell, including utility spells and land activations such as Moorland Haunt. Here, specifically, you're looking for spells with more than one colored mana symbol in the cost. For example, Doom Blade is easier to cast than Victim of the Night which is easier to cast than, say, Massacre Wurm because of the extra color requirements in the casting cost. Your mana base needs to be able to support every spell in your deck, as well as time constraints, such as what turn you want to be casting your Day of Judgment. Finally, once that's done, take one last look to determine where in the mana curve your colors fit. In last week's Black White deck, you may have noticed that all of my white spells are 3-CMC, at the high end of my mana curve. That means that I don't have any use for White mana on turn one or two, so I have extra turns to draw a White source before I might need it. 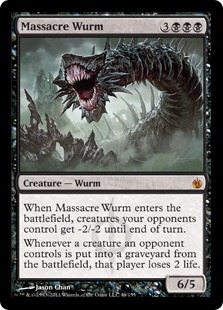 Now that we've taken stock of our deck, it's time to make our first attempt at a mana base. Looking at the type of deck you're constructing (Aggro, Combo, Control, etc.) and, having a rough idea of what your mana curve looks like, you can consult the handy chart here to see roughly how many lands you should include. To be sure, 24 is a safe bet to start with, but you'll want to skew up or down depending on what you're trying to do with the deck. I've seen successful decks running as few as 16 and as many as 37 lands, so don't think that you need to keep it in the 22 to 26 land range forever. Acceleration, such as Birds of Paradise and Rampant Growth should also be taken into account when deciding how much land to include. I've seen a few different suggestions for this, but I like the 2-for-1 approach, where you can safely remove a single land for every two acceleration spells. In case you're running 4 Rampant Growth, for example, you can usually get away with going from 24 down to 22 lands, assuming sufficient green sources to actually cast the accelerants, based on wanting 4 mana available on turn four. Finally, we get to our land composition.