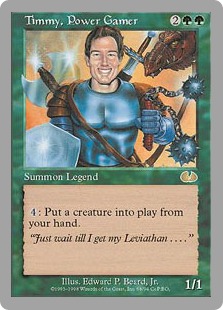 If you've been playing Magic for some time, you've almost certainly experienced a temporary waning of the general fervor for the game. Don't be alarmed, this is perfectly normal. Do not attempt to cash out and sell your collection, you'll regret it when you want to start playing again, and even more so when you look up the would-be value of your cards in the future. Instead, take a breath, take a step back, and let's take a quick jaunt through some of my typical meanderings while I wait for my playgroup's interest to be rekindled by a new expansion or a shiny new deck.

If you're interested in some fairly in-depth Solitaire versions of Magic, you should check out this article, Playing Your Pet. I've been playing goldfish since I picked up a Magic deck, unbeknownst to myself until recently. It's just such an intuitive way to test a deck's ability to drop an opponent from 20 to 0, that in my mind it never needed a name and it was only the past couple of years that I discovered that it was called something after all. The long and short of goldfish is that your opponent does nothing, much like a goldfish swimming in its bowl. There is no real interaction. It simply looks on with awe as you deal 20 damage as fast as possible. Without any resistance, it should be fairly straightforward to win in short order, but it should be noted that just because it works against a goldfish, doesn't mean it works. Take an extreme case of a deck with 40 Goblins of the Flarg and 20 Mountains. Sure, you can beat a goldfish in 6 turns, but a single Grizzly Bears will basically shut you down. It takes a bit of refinement to see to it that your deck can deal 20 damage in only a few turns, while also being sure you are capable of powering through some defenses. Enter the dog. This solitaire opponent is much more of a challenge, since it actually does stuff during the game, and can even garner card advantage in a longer game (one land plus one spell per turn means that 7+ turns gives card advantage to the dog.) This is a more complex approach, but actually attempts to simulate playing an opponent, which can easily outclass a lesser deck, since the mana base is artificially perfect and the player will always be casting the most powerful possible spell on a given turn. Of course, if I'm involved enough to be playing against the dog, I typically just pit two of my decks against each other, playing both sides and vying for neither deck in particular.

Duels of the Planeswalkers

When I get tired of dueling myself in solitaire Magic, there's always my fallback digital facsimile, Duels of the Planeswalkers. I played the original and the more recent version(Duels 2012) to completion, and still I go back for more. They make a very sound investment for any Magic player that's used to spending $4 on a single Booster Pack, since you get access to several decks for only a few dollars. While the deck choices are pretty solid, the game will leave you wanting for more customization. You are not able to build custom decks in Duels, though you do unlock upgrades for most decks as you play, giving some element of optimization, if not construction, the longer you play. In Duels 2012 they even included Archenemy Mode which, if you're not familiar, pits up to three players against a single enemy. You can play as or against the Archenemy, and the casual format brings something new to the table with the Scheme Cards that give powerful effects to benefit the common enemy. If you're new to Magic or even just interested in learning, Duels is a great place to start. You'll learn all you need to know about the turn structure, as well as the basics of the Stack and Priority from playing a few games against the computer, which should prepare you well for a real game against a friend.

Finally, there is MTGO, the actual online counterpart to the paper-based game. This is a whole different beast than Duels of the Planeswalkers, since you'll need to have some idea of what you're doing to really get started here. If you're avoiding Duels because of the lack of customization, however, this is a great place to look. Not only can you get access to the Duels decks in the Planeswalker format, but you can even create custom decks from scratch without the heavy monetary investment required to get a Standard collection started. I started my own account a few years ago, but I never kept up with it, since I so favor paper Magic. As a result, my entire collection sports a paltry 26 Standard legal cards, making the barrier to entry into Standard a bit high for me. Though I am recently considering working on my drafting in MTGO, I'm currently relegated to the Planeswalker format and building out new decks from the pre-constructed card pool, at least until the new Cube format debuts at PAX East.

So what about you? When local interest wanes, do you play solitaire Magic to bide your time, or do you prefer the digital fare? Do you like playing the AI in Duels, or crafting your own deck and competing against other people in MTGO? 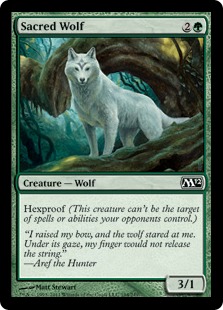 A: Yes, evasion abilities can prevent a Hexproof creature from blocking. Hexproof specifically prevents Targeting by spells and abilities controlled by opponents. Flying and other evasion abilities do not target, rather they are always-on abilities that restrict what creatures can be assigned as Blockers. Grotag Thrasher, on the other hand, has a triggered ability that triggers whenever it attacks. This ability does target, and so Sacred Wolf cannot be affected by an opponent's Grotag Thrasher. Finally, as before, Hexproof only prevents targeting by spells and abilities controlled by an opponent, so you can still target your own Sacred Wolf with Giant Growth. Similarly, if you cast Redirect on a Go for the Throat controlled by your opponent, you can target a Hexproof creature they control, since they are still the controller of Go for the Throat thus making their Hexproof creature a legal target.

702.11b "Hexproof" on a permanent means "This permanent can't be the target of spells or abilities your opponents control."

Question of the Week
You control an Unearthed Etherium Abomination. Then, you cast Ghostway. At End of Turn, what happens?