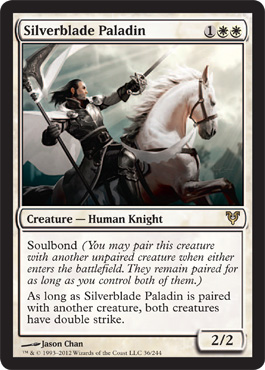 As the name suggests, in Block Constructed you only have access to cards from the namesake Block, in this case Innistrad. As such, when we talk about Block Constructed at present, we're only looking at Innistrad and Dark Ascension, though I'll be intermingling some discussion of Avacyn Restored today. After all, we're only two weeks out from the release of Avacyn Restored, and I think it's important to be prepared for what lies ahead, as well as learning from historical data. Before we get started, I should note that, effective April 2nd, Lingering Souls and Intangible Virtue have been banned from Block. These two cards, alongside a plethora of other Token producers, were apparently simply too powerful to let run rampant through the format.

That being said, Block Constructed has been absolutely dominated since those bannings by Red/White aggro builds, so I believe that is the best place to start. Some commonalities among these RW builds are a playset of Champion of the Parish alongside Gather the Townsfolk. This gives you the opportunity for a pretty explosive start with a 3/3 Champion on turn two. Doomed Traveler is another mainstay, providing two bodies to chump block with, another human to proc Champion of the Parish, and a flier on the back end, who's evasion helps to circumvent a stalled ground war. To that end, Midnight Haunting sees a lot of play in most builds, as well as the occasional Geist-Honored Monk, both of which put some flying power on the board. Hellrider is another staple for the archetype, providing reach again. In case the opposing player starts dropping creatures that outclass the RW player's horde, Hellrider gives some direct damage to finish them off. Four Brimstone Volley and some number of Devil's Play round out the kill package, looking to get as much damage in early with the critter swarm, and following up with some morbid Brimstone Volleys to close out the game. Mikaeus, the Lunarch gives some utility to the deck, allowing even an outclassed RW player to pull ahead on the board, while Fiend Hunter helps to ensure that the opposing board doesn't develop too much. Stromkirk Noble has started seeing some inclusion as a way to shore up the mirror match. Given the prevalence of Humans in the deck, Stromkirk Noble's inability to be blocked by Humans can be very relevant. Similarly, in various builds, you may see Rally the Peasants, which can turn four 1/1 creatures into lethal damage at instant speed. I strongly expect Silverblade Paladin to make a splash on this archetype when it gets released, given the lack of Mirran Crusader to compete for its spot on the mana curve. I'm not certain as yet, but Vexing Devil may also come in, though with Red typically being the secondary color in the deck, it may not lend itself to another Red 1-drop. 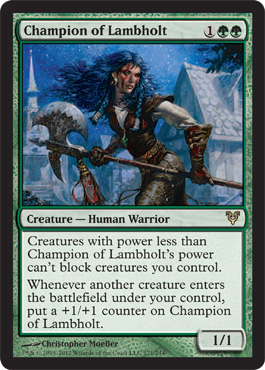 A more recent player in Block Constructed is Red Green aggro, which seems to have picked up a lot of steam with its recent successes in Standard. Huntmaster of the Fells is, as always, an absolute beast, providing an immediate board presence as well as taking out opposing creatures when he transforms. Daybreak Ranger is another centerpiece for RG. Though not necessarily a four-of, Daybreak Ranger is perfect against the occasional flipped Delver, the plethora of Spirit tokens, and the Nightfall Predator's fight ability on the reverse side acts as removal for all but the biggest threats. Avacyn's Pilgrim or Dawntreader Elk work as acceleration in the deck, powering out turn three Huntmasters fairly easily. Strangleroot Geist works well in many of these builds, putting pressure on early, and being resilient to removal, though having two Green on turn two can sometime be troublesome without friendly-colored dual lands to assist. Most RG decks I've seen to date feature finishers in Flayer of the Hatebound and Vorapede which work well together to close out a game. As for looking forward, I'd like to see Reforge the Soul as a way to restock the hand in the mid-game, though I'm not convinced that it will necessarily see play, given that the other top-tier decks are putting their hands in play just as quickly. Vexing Devil, again, may see some inclusion, though whether it will become a staple is definitely up in the air. Champion of Lambholt seems like another potential winner, making your critters harder to block as you cast more creatures, which seems profitable.