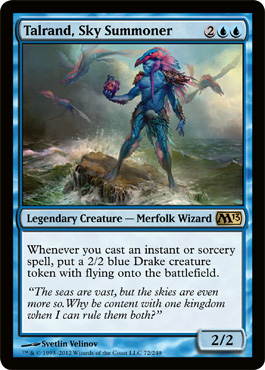 Wizards of the Coast has teamed up with Stainless Games to put out Duels of the Planeswalkers, a digital version of Magic, previously available on PC, Xbox360 and PS3. This year they're adding iPads to the roster, and tying in the Core Set, Magic 2013, release with the launch of the Duels 2013 game June 20th. This tie-in means a special week of Preview cards for the new Core Set, where Wizards has been featuring the spells which you'll see in both Duels 2013 and Magic 2013. I'm pretty excited about some of these cards, and I can't wait to get my hands on the new Duels to try them out, much less to get my hands on the actual cards in July. Let's get to it, shall we?

First things first, they're introducing a new Legendary Creature for each color, which I understand forms the basis for five of the Duels 2013 decks. Some of these, like Krenko, Mob Boss, seem to be largely combo-esque cards. Krenko reminds me of a much better version of Goblin Warrens, providing an endless stream of Goblins. Even if you only control Krenko himself, you're still tapping him to put a creature into play, which seems pretty powerful. With things like the aforementioned Goblin Warrens, more straightforward stuff like Empty the Warrens, or even more recent spells like Kuldotha Rebirth, you can get a slew of Goblins on the board and just take over the game. Throw in a Goblin Chieftain to double the power and grant Haste to the whole mess of them and you've got yourself quite a curve going on. Imagine first turn Memnite and Kuldotha Rebirth into a second turn Goblin Wardriver. Third turn you drop your Goblin Chieftain into a fourth turn Krenko. Tap for six hasty 2/2 Goblins and swing for lethal!

As much as I like a turn four kill in Standard (until rotation in October,) Blue has the Legend I'm most looking forward to in Talrand, Sky Summoner. He's a Merfolk Wizard, which makes him that much cooler. What's really important, though, is his ability, which creates a 2/2 flier every time you cast an Instant or Sorcery. Cram this guy into a Blue control deck with Mana Leak, Dissipate, Vapor Snag and the like, and you're getting exceptional value any time he's on the field. Even if you just throw him into the already spell heavy Delver decks, in place of another four-drop like Dungeon Geists, and you're going to be on a short path to victory. If you combine his ability with Tamiyo, the Moon Sage's ultimate, plus something as simple as Thought Scour, you'll be getting a 2/2 flier for every Blue mana you have available, plus you'll be drawing oodles of cards, not to mention this is all at Instant speed. While I don't see any way to make this into a fourth-turn win like Krenko, I think the longer-game capabilities of Talrand far exceed those of his Red counterpart.

Another very interesting bit, which was mentioned in the forums last week, is the reprinting of Rancor. I was not active during its heyday, but I've been on the receiving end of Kross' Rancor before and it can be a little bit absurd. Every single creature becomes a must-answer threat, every time. The only ways I've seen to get rid of a Rancor is to remove its target before it resolves or make your opponent discard it, though I suppose an Oblivion Ring would do as well, as inefficient as that exchange is. But then, what happens when the opponent is wielding four of them? Well you'd better hope you've got some serious defenses up. For the original printing, in Urza's Legacy, it was actually a Common! I don't know how they justified that, but fortunately this time around it's been slated as an Uncommon so it shouldn't be dominating every game you play in Limited. 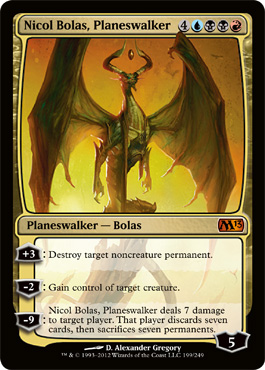 One of the things I am most excited about with the Core Set is the return of the Exalted mechanic. It reads "Whenever a creature you control attacks alone, that creature gets +1/+1 until end of turn." What it doesn't say in the rules text is that Exalted stacks between creatures, so if you control three creatures with Exalted, and attack with one of them, that creature gets +3/+3. It doesn't end there, though. If you have multiple instances of Exalted on a creature, each triggers separately, meaning that Exalted is never redundant which makes Sublime Archangel absolutely amazing. With the introduction of a new Exalted land, Cathedral of War , and any number of lower CMC creatures with the ability, your fourth turn Sublime Archangel is going to be huge. I also like the branching out of Exalted into Black with the likes of Knight of Infamy, as I don't believe they've ever printed Exalted creatures in Black.

Last but not least, there's one card that is hands-down the most thrilling comeback in the revealed cards so far, at least for me. I've mentioned him before, as one of the progenitors of the EDH format, though this is his new incarnation. That's right, they're bringing back Nicol Bolas in the form of Nicol Bolas, Planeswalker! At eight mana in three colors, he's most likely only ever going to find himself in a heavy control deck playing the extra long game. I've primarily seen Nicol Bolas, Planeswalker alongside Cruel Ultimatum, however, so I'm not entirely sure that he'll even be viable in Standard, but he's still my favorite character in the world of Magic so I can't wait to see what I can build with him for the format.

Of course, by now there have been even more cards spoiled, so what else are you looking forward to from Magic 2013? Are you going to make a control home for mister Bolas, or will you be going for a fourth turn kill with Krenko, or will you be utilizing the more mid-range Exalted mechanic?