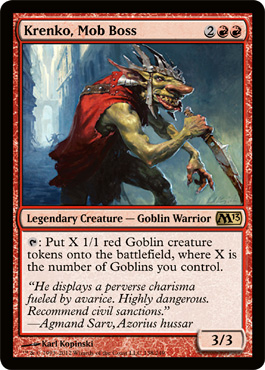 Last week we talked about a number of preview cards which are featured in both Magic 2013 and Duels of the Planeswalkers 2013. This week, we'll be looking at the decks from Duels, where our previews from last week will find their homes. In case you missed it, Duels 2013 came out last Wednesday, June 20th, so if you haven't had a chance to check it out on XBLA, PSN, Steam, or iPad, you should definitely give it a whirl. I believe there are demos available for each platform so, if you're not sure you'll like it, try it out first. Given that you're reading this, however, I can't imagine you wouldn't enjoy Duels.

I'd like to start with my very favorite deck in Duels 2013, home of Krenko, Mob Boss, and generally nasty (for the format) Goblin deck, Goblin Gangland. While I like Talrand, Sky Summoner in constructed because of his 'build around me' appeal, in the context of Duels 2013 I much prefer the faster beatdown decks. Krenko's mono-Red is almost certainly the fastest deck in the game, with the White Weenie deck being a not-too-distant second. It comes out swinging with hasty one-drops like Raging Goblin, and powerful follow-ups like Goblin Bushwhacker. I've won games as early as turn six with this deck, and it looks like even a fourth turn win is conceivable, however unlikely. Following a Krenko's Command with a Goblin Chieftain will usually lead to an early win, and a turn four or five Bushwhacker will also tend to win you the game shortly thereafter. My favorite card in the deck has got to be Reckless One, who benefits from both the buff from Goblin Chieftain and the cost reduction from Goblin Warchief. He'll usually come down as a 3/3 or higher with haste, which is a pretty nice way to start closing out a game, especially when you've got more Goblins in hand to buff him each turn going forward. I wasn't quite as fond of Rummaging Goblin here, though, since he's really slow to get going and is always a gamble to use. I also sided out Mindmoil early on, since it should be doing a lot more than it does for five mana in a deck this fast. At five mana, I'd much rather be pumping out four creatures with Siege-Gang Commander and winning the game two direct damage at a time.

My second favorite deck so far is probably the aforementioned White Weenie build, Peacekeepers. I don't know why exactly, but I tend to enjoy the quick decks in this iteration of Duels more so than the longer-game decks like Ancient Depths which was my favorite deck from Duels 2012. This mono-White deck features another new Legendary creature, Odric, Master Tactician, who lets you decide how blocks are declared when you attack with him and three other creatures, making your attacks always favorable. More often than not he just makes your forces unblockable, but that's usually more than enough to take home a win. This deck is fast, but nowhere near as fast as Krenko's Goblins, though it is much more well-rounded due to the inclusion of plenty of removal in two Oblivion Rings, three Pacifism and a pair of Fiend Hunters. This is one of the more irksome decks to play against, since they always seem to have removal when they need it, but it also makes it one of the more interactive decks to play with. There's also a lot more consistency built into this deck, sporting multiple copies of most of the cards in it. I'm not really sold on Captain's Call, though, given that you've got the Instant-speed Raise the Alarm putting out two creatures at half the cost, but most of the rest of the deck is pretty solid, and Call can be useful for getting your Odric plan off the ground. As before, it's not nearly as fast as Goblins, but it is faster than the rest of the field, from what I've seen, taking down most opponents before they've had much opportunity to mount a real defense. 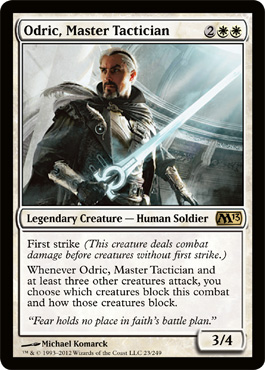 If you're looking for a slightly longer game, you would do well to try out Yeva's deck, Ancient Wilds. This is, from what I've seen, the most synergistic deck in the game, with many of the interactions revolving around the fairly efficient Roaring Primadox, which teams up with any number of other creatures to ensure that you're getting value every turn. Elvish Visionary, to start, gives you card advantage, while Bond Beetle gives you a +1/+1 counter each time it enters the battlefield, so bouncing it each turn can be hugely profitable. The most devastating partner is certainly Thragtusk which gives you 5 life when it enters, and a 3/3 Beast when it gets bounced. I've been on the receiving end of this one too many times, and now I simply restart the duel when I see the pair come out. This is also my favorite deck to see a Ring in play. If you haven't seen them, the Ring cycle for M13 features one for each color, each granting a color-pie associated keyword ability (for example, Green's ring gives Trample while Red's gives Haste), as well as providing a +1/+1 counter each turn if the equipped creature is on-color. Ring of Kalonia is one of my favorite rings, to be sure, given that the Trample works well with the huge creatures in Green as well as benefiting from the counters the creature receives. Given the slower nature of the deck, the ring has plenty of time to pump up the equipped creature to epic proportions. The only trouble with this deck is staying alive for the longer game, though I found that it thrives in the Planechase environment, where the opponents have other players to deal with, giving you some room to breathe.

Ultimately, if you're looking to progress through the game quickly, your best bet is going to be either Krenko or Odric. If you're approaching it at a more leisurely pace, however, all of the available decks have their own appeal. If you get stuck on a particular duel, or are enjoying the Planechase game mode, Yeva's Ancient Wilds deck can usually help push you through. With ten decks to play and customize, Duels 2013 has some solid replay value and you only need to win 300 games to unlock everything!