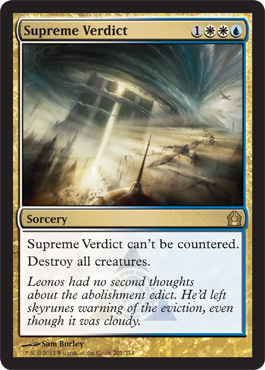 Most set releases introduce one or two new mechanics to the game, such as Innistrad's Morbid and Double-faced Cards. Return to Ravnica, however, is introducing five such mechanics, one representing each of the five guilds that will be in the set. They've done a great job of capturing the essence of each guild in their respective mechanics, and today we'll be taking a look at all five. After all, with the pre-release just a couple weeks away, it's going to be important to know which guild you want to align yourself with!

Azorius, representing Blue and White, are keepers of the law on Ravnica. Their new mechanic, Detain, clearly shows this aspect of their nature. Whenever Archon of the Triumvirate attacks, for example, you may Detain up to two target nonland permanents your opponents control. When you Detain a permanent, it can not attack or block, and it's activated abilities can not be activated until your next turn. The mechanic acts like a temporary Arrest, and in the case of the Archon here, this will completely lock down any board with two or fewer threats in play. It only takes five turns to go from 20 to 0 with this guy, and unless your opponent has tons of creatures in play, you're likely going to be stopping their attacks short as well as their defense. If they overextend by playing more creatures to get around your Detain, we've even got the uncounterable Day of Judgment in Supreme Verdict to retaliate.

Selesnya represents Green and White, revering nature and growth. Selesnyans are evangelical in their beliefs, always looking to grow their guild through new recruits. Enter the new mechanic, Populate, which does this superbly. When you Populate, you put a token creature into play that is a copy of another token creature that you control. It isn't a targeted ability, which means even if your desired Token gets killed before you get to Populate, you can copy another token you control, rather than the ability just fizzling. Whenever Wayfaring Temple deals combat damage to an opponent, you get to Populate, but that requires you to have a token creature in play. That's where spells like Eyes in the Skies comes in, which creates a token, then lets you populate. It's no Lingering Souls, but it's a start! Couple the Wayfaring Temple's repeatable Populate ability with Grove of the Guardian and you're churning out giant creatures every turn.

Rakdos guild is Red and Black, lead by the demon of the same name. They celebrate anarchy and chaos, so assigning defenders is not something they really relish in. This comes through with their mechanic, Unleash, which can make for some very aggressive creatures, as long as you don't plan to use them as blockers. The Unleash mechanic allows you to choose to put a +1/+1 counter on the creature when it comes into play, with the caveat that if it has a counter, it will be unable to block. The creature with Unleash doesn't care where the counter came from, though, which is worth keeping in mind. If you Travel Preparations a creature with Unleash, you're not going to be able to block, even if you didn't choose to put the counter on it when it came into play. At least one creature revealed so far gets other bonuses for having counters on it as well, namely Chaos Imps, which gains Trample when it has a counter. That's a 7/6 Flying Trample for 6, which seems pretty amazing, even if it can't stay back to block. 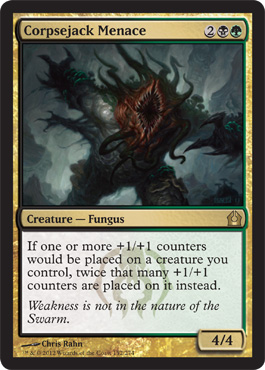 Izzet, featured alongside the Golgari guild in the most recent Duel Decks set is Blue and Red. They're mischievous tinkerers lead by the dragon Niv-Mizzet. Always looking to turn it up to 11, I think Goblin Electromancer's flavor text says it all about Izzet. Their mechanic, Overload, is perfectly in line with this mentality. Take Street Spasm for instance, which deals X damage to target creature without flying that you don't control. If you cast it for it's Overload cost instead, you replace every instance of the word "target" with the word "each." Simple enough, right? Now it reads "... deals X damage to each creature without flying that you don't control." That's basically a slightly restricted version of Bonfire of the Damned, which doesn't need to be Miracle'd to be good.

Finally, we've got Golgari, representing Black and Green. The Golgari celebrate both sides of the coin of life and death, as evidenced by their color affiliations. They claim the dead for their own, and, in true Soylent fashion, provide sustenance to those in need of it. Composed of Elves, Zombies, insects, and even undead plant creatures, the Golgari's reach stretches further each day, as new the crumbling ruins of forgotten regions of Ravnica are taken over by their organism-like structure. Using the dead to help the living thrive is a theme in the Golgari, and where their new mechanic, Scavenge, comes from. When a creature with Scavenge is in your graveyard, you can pay the cost of the ability to put +1/+1 counters equal to the creature's power onto target creature you control. This utilization of fallen comrades for the continued strength of the guild at large sits really well with the typical stance of the guild, and shows that there is as much power in death as there is in life. Couple Scavenge with Corpsejack Menace, and you're looking at huge buffs to your creatures for minimal cost.

Now that you know what each guild is about, which side are you on? For the pre-release, you should be sure to have a guild picked out. Let us know in the forums where your loyalties lie!