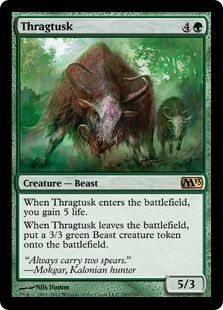 While I didn't take home any prizes from States 2012, I did come away with a significantly better understanding of what's going on in Magic right now. As seems to be a trend with my competitive play, I found a deck that I was very weak against, and fought it all day long. This time it was Black and Green, sometimes with Red to bring them into Jund colors. Tokens, as was mentioned in the comments last week, is particularly weak to the likes of Golgari Charm and Mizzium Mortars, both of which I met the business end of over the course of the day. It also turns out that, when the opponent is swinging for 5 with a Strangleroot Geist and Dreg Mangler on turn three, you don't want to be casting Midnight Haunting as your first spell of the game. My tokens were simply too slow, though I've seen some success stories with other tokens builds that feature Ramp components like Avacyn's Pilgrim and Farseek, instead of following the natural mana curve of the deck.

Where I was playing a slower midrange deck, my opponents were swinging hard and fast, and left me little time to fill up my board, and no breathing room at all for a spell like Parallel Lives which doesn't affect the board on entering. I got a Cathars' Crusade down once, with Sorin, Lord of Innistrad in play, which would have kept me in the game, except for my opponent's plentiful removal. After he Pillar of Flame'd my lifelinker, he dropped another hasty creature and took the game in one fell swoop, ignoring Sorin entirely.

As it turns out, Golgari has plenty of ways to kill Intangible Virtue and clear a board of 1/1 creatures, and it all comes from the same card. Golgari Charm, as I mentioned earlier, is currently the bane of Tokens' existence. It kills all of my enchantments, if I'm lucky enough to have them out, it clears my board when I'm lacking an Intangible Virtue, and it acts as a combat trick, regenerating the recipient of a triple-spirit-block. Given that I was expecting a boatload of Azorius aggro and Zombies, rather than more straightforward Jund and Golgari aggro, I simply did not prepare for this eventuality, and it cost me dearly. That brings me to another problem card for my build, Thragtusk.

I sideboarded my own Thragtusk for games two and three, but it seemed like every deck I dueled was running four of them main deck, leaving me little recourse except to hope I was in a dominant position by the time he came down. I did manage to take down a triple-Thragtusk game one against a Jund deck, which pleased me greatly, but I fought a dozen beasts over the course of the day, and they just do too much to go unchecked. They're impervious to all of my removal, leaving behind their 3/3 token buddy, so something like Arrest would have been a welcome addition to my removal package. 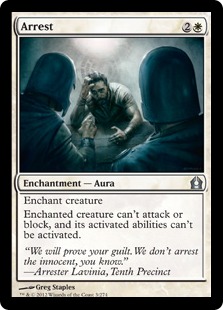 That brings me to my new plan. A plan of action. A plan of destruction. The Bant Plan. Currently, it seems that Bant Control is the most popular deck in Standard. This plan features Detention Sphere, Supreme Verdict, and Terminus in spades. It also features four of my favorite beastly critter, Thragtusk, a little bit of Ramp in Farseek and a whole lot of card advantage. It won States in Maine, in fact, and I like how they've taken control from an instant-speed base, as we saw with the Mana Leak-dominated Standard of a few months ago, to a slower, more ponderous sorcery-speed base with the likes of our current slew of removal. With eight sweepers available, plus Detention Sphere, it shouldn't be too much trouble to take down a creature strategy. Meanwhile, with beaters like Thragtusk leaving behind his 3/3 token friend after a sweeper, it has ways to win. When a Thragtusk goes to the graveyard, you can eventually get him back with Angel of Serenity, so you're doubling up on your lifegain and creature tokens, while your opponent is recasting creatures of their own.

Ultimately, I've decided that my version of Tokens is just too slow for competitive play. Despite all the removal, without the more efficient Doom Blade or Go for the Throat in the arsenal, it simply isn't enough. Chump blocking to trigger morbid on Tragic Slip just doesn't cut it when you need every token swinging each turn, and Tribute to Hunger is too situational to be used effectively, except as a specific plan against Hexproof critters. Oblivion Rings were nice, and they definitely came in handy, but I don't want to spend my entire turn responding to a single creature, which all too often just spawns another threat.