For previous columns in this Let's Play series, click here.

In our last column, an interstellar war had consumed much of the galaxy. Greg had fought Janelle to a stalemate along their opposing borders, with neither side gaining a clear advantage, while Paul assaulted Josh's territory and set him back several rounds with the temporary occupation of Josh's homeworld. Meanwhile, Jon had lost much of his empire to the vast military might of Justin, and was left struggling to rebuild what few ships he could while Justin brought out the deadliest unit in the game - the gigantic War Sun - and poised himself within reach of Mecatol Rex, the throne of the galaxy.

With the possibility that Justin could seize control of the galaxy through pure force of arms, here's what our players did during the next few rounds of the game: 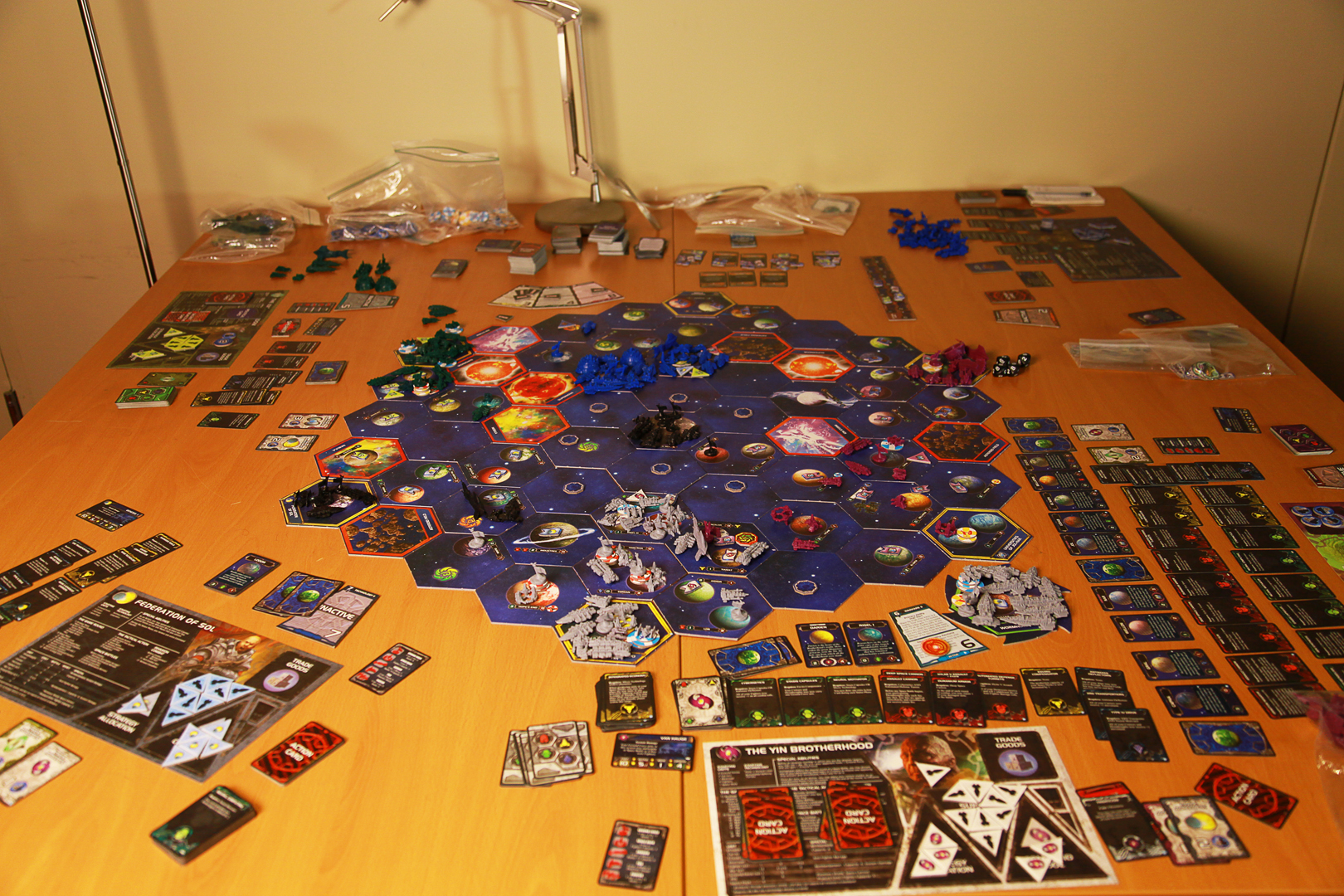 Commodore Josh Vanderwall of the Federation of Sol says: Recent times have been immensely troubling for the Sons of Sol. With our neighbor's aggression, we've lost Everra, and, despite easily destroying the fleet guarding our planet and bringing every available ground force to bear, the mechanized infantry of the Xxcha repelled our attempt to reclaim our lost world, and every man perished in the effort. We did at the least blockade the planet, isolating them from any possible reinforcement.

Shortly after the crushing defeat on Everra, our grand schemes for Mecatol Rex were also laid low, as the L1z1x Mindnet brought an armada down upon our defensive fleet so large that it nearly dwarfed the massive planet itself. Two War Suns and five Dreadnoughts, accompanied by a handful of lesser ships, all swarmed into our new system unexpectedly. Our fleet was ordered to retreat from the battle, but was destroyed to the last ship in its attempt to evacuate the area. Our troops on the ground were easily overwhelmed, and Mecatol's new Space Dock was lost when the planet was taken. The Sons of Sol will never forget this massacre, and the Mindnet will pay for its wanton aggression. 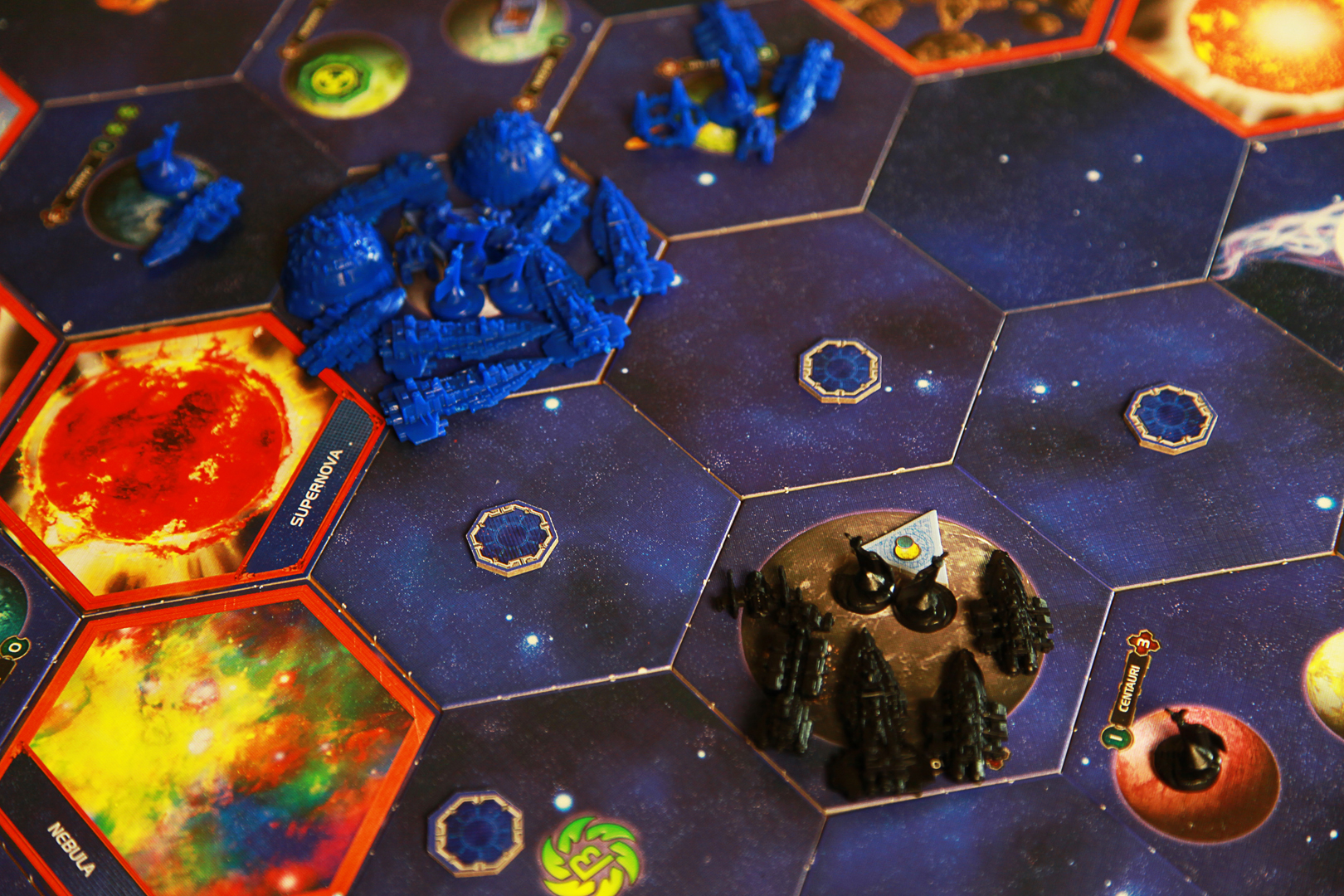 After losing Mecatol, the Sons of Sol at long last made a tentative peace agreement with the Xxcha. The Xxcha have agreed to relinquish their grasp on Everra in exchange for a ceasefire between our races. With Mecatol in the hands of our newly-sworn enemy, we have amicably agreed.

The entire human race was shocked when we learned that the Mindnet had abandoned Mecatol and brought its fleet down upon the Sardokk N'orr. They are the first total casualty of this galactic war. With Mecatol undefended, we jumped at the opportunity to reclaim it and did so at virtually no cost in lives. The Universities of Jol-Nar struck back at the Mindnet for its recent genocide, wiping out its flagship and positioning itself for an assault on the Mindnet's homeworld of Null. We collectively pray that this is enough to distract the Mindnet fleet, and allow us to retain control of Mecatol Rex until our grand plans come to fruition.

King Paul of the Xxcha says: With the rise of the Mindnet and their assault on Mecatol Rex, our priorities have shifted. The Federation of Sol's fleet at Mecatol has been completely wiped out, and reports from the handful of survivors fleeing the system report giant vessels of unimaginable power at the fore front - War Suns, massive battleships that we thought were nothing more than rumors, but now are a terror made manifest. Within a short time of the attack on Mecatol, these abominations of war have were also reported floating in the skies over the last few bastions of the Sardokk N'orr, and through an encrypted communication with the N'orr's Hive Alpha, the worst has been confirmed... the Mindnet have all but destroyed the proud warrior race. Asides from a few scattered refugee flotillas fleeing towards neutral space, the Sardokk N'orr are no more.

This near complete destruction of a sentient, star-faring species has caused a ripple of terror, fear and anger throughout the galaxy; we have all accepted that war is sometimes a necessary evil on the stage of galactic politics but outright xenocide is intolerable. Through a flurry of communiques with the other galactic races, it has been determined that the Mindnet is a clear and present danger and must be stopped. 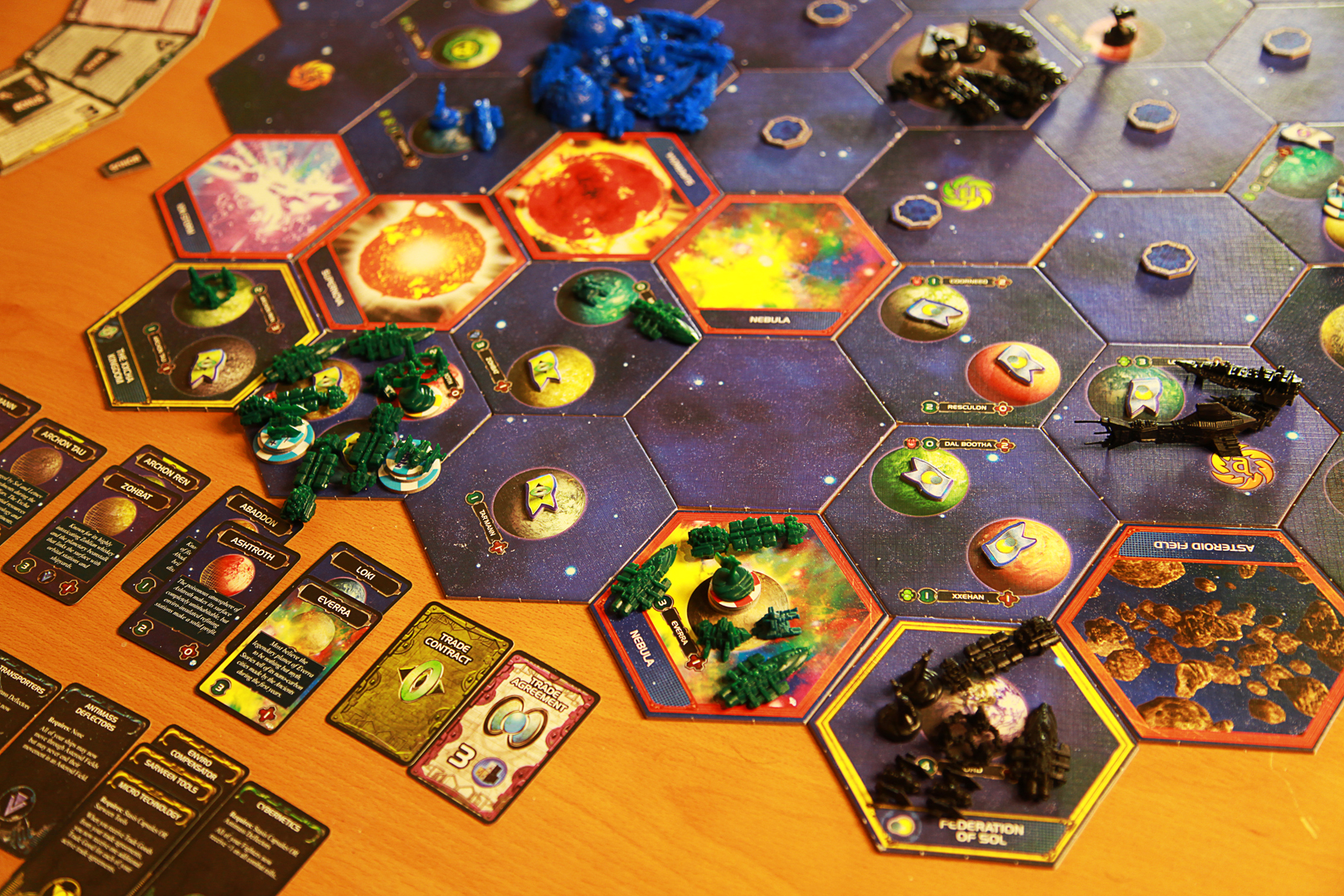 An immediate armistice has been signed with the Federation, as both of our nations must rebuild our respective military to weather the oncoming storm. We have agreed to concede Everra - for now - back to the Federation, and have begun to withdraw our troops from the nebula-encased planet. We are focusing our efforts on acquiring new technologies with the help of our friends the Jol-Nar, as well as organizing a rapid response fleet of fighter-filled carriers and nimble cruisers. We do not know for sure if we will be able to engage the Mindnet along its front lines, but we must be prepared to take that action if the opportunity arises. The Yin and the Jol-Nar have also turned their attentions to the larger threat; the Jol-Nar main battle fleet, led by their impressive Flagship, struck deep into the very heart of the Mindnet and may occupy their homeworld before the end of the cycle. It remains to be seen if the Jol-Nar and the Yin will be able to survive the inevitable counterattack, but we will put our trust in their admirals that they will see this through.