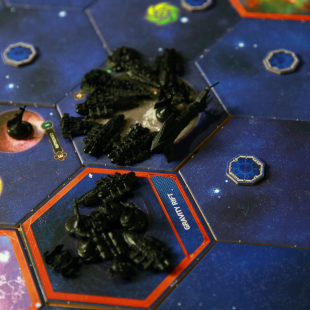 Commodore Josh Vanderwall of the Sol Federation says: After careful planning, the Sons of Sol were able to wrest control of four planets in two systems from the villains that slaughtered our fleet and stole Mecatol from us. With Mecatol Rex back in our control, we are gearing up as quickly as possible to finally achieve our long-standing aims. With the resources available now, thanks to the tireless researchers back home, we have been able to construct a Space Dock on Mecatol once again, in preparation for our final push to our objective.

Working with the Jol-Nar proved ultimately futile, since the Mindnet fled Mecatol in fear of our glorious fleet's might, but he has not betrayed us yet, as he did with our longest standing trade partner, so we'll see whether the Universities prove good to their word.

The triumphant reclamation of Everra has finally come to pass. Jord's sister planet in the nearby nebula was out of our control for too long, but we have made peace with our aggressors again - now to see how long it lasts this time.

A true testament to human ingenuity and resolve, we have most recently completed our goal to control Mecatol Rex, have a Space Dock present there, and have eight ships in the system's orbiting fleet. This pushes us ever closer to victory, and I couldn't be more proud of the scientists, captains, and soldiers who are responsible for this incredible feat. For glory and for Sol! 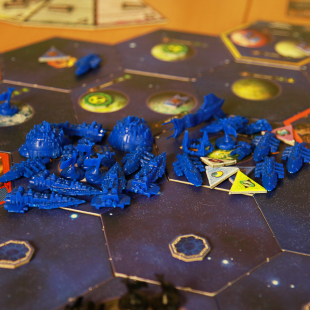 Warning: Connection severed with primary fleet 0001. Fleet unable to transit for this cycle until communications restored. Analysis indicates source of jamming to be Brotherhood of Yin.

Status: The Universities of Jol-Nar fleet within range to strike Mindnet homeworld [0.0.0]. Diplomatic protocols enabled to determine logic of The Universities of Jol-Nar aggression. Protocols fail to compile a response before Jol-Nar fleet transits into [0.0.0] sector. Home defense fleet 0010 no longer functional. Federation of Sol scout fleets seize additional planets in Mindnet home sectors. Production output calculated to -64% decreases in efficiency and resources. The great memory banks and stardocks of the Mindnet have been invaded by organics.