To catch up on all the previous action, you can see the whole Twilight Imperium series here.

When we last left off, the game had reached an uneasy stalemate, as a new objective that allowed whomever blockaded two enemy home systems first to win the game instantly entered play, and our players had to take a moment to consolidate their power. Justin had gone from aggressively expanding in previous rounds to aggressively retreating back to retake core planets he had lost (including his home world) to Greg's swift invasion. Meanwhile, Greg's left his own empire open to attack, and was working to reinforce his borders against anyone who may make a foray into his lands. Meanwhile, Janelle's mighty military strength hung back in reserve, as she was unsure of where to send it, and Paul spent as many resources as he could to build up a huge armada. Like Janelle, Paul was unsure of where to send their strength, as just next door Josh had completed a massive, fleet destroying War Sun within easy reach of Paul's planets, but Justin's retreat left many planets open.

As the game entered Round 11, no one was entirely sure who would do what first, but a surprise action by one of the players ended up being the deciding factor of the entire game... 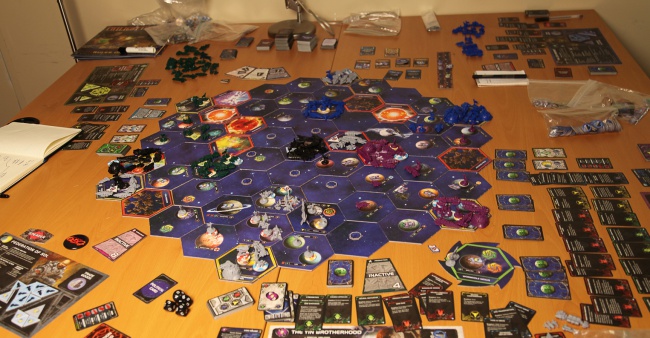 King Paul of Xxcha Says: After counselling with my generals, we determined that, with the threat of our extinction greater than ever, we must launch a new military offensive against the Federation with the goal of destroying their War Sun and crippling their military as best as able - we will not wait for them to enter our space with their horrific engines of war as the Mindnet did with the Sardokk N'orr. Our forces once again entered orbit over Everra, engaging in a fierce space battle and ground campaign with the Federation main fleet. Our fleet was all but destroyed, but not before inflicting severe damage too many of the Federation's ships and damaging their War Sun severely. Meanwhile, our secondary fleet swept in and claimed some of the Federation's undefended worlds. Our position appeared tenable, and our engineers predicted we would be able to quickly rebuild a defensive fleet, but I fear we may have only delayed the Federation's inevitable assault on our worlds. 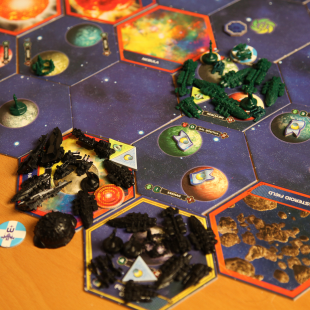 It was at this time that one of my generals indicated that the Yin, having kept most of their forces in reserve around the Wormhole Nexus, held a significant advantage over many of the races, one that could clinch their claim to the Throne on Mecatol Rex by bringing the more aggressive members to heel. The Yin's access to wormholes allowed them to traverse a significant portion of the galaxy with ease, and could possibly liberate the Sardokk N'orr 's home system from the Mindnet and blockade the very heart of the Sol Federation.

I contacted the Yin's High Priestess directly to discuss the opportunity. She listened intently, but part of me felt she may have already known of the advantage she held. After dispensing some advice on how best to partition her forces, we waited with abated breath as the first of her ships engaged the Mindnet and the Federation.

As the other races scrambled for assistance to prevent the Yin from completing their goal, the Xxcha stood mute; we will not be the successors to the Throne, but we will not prevent someone as respectable as the Yin from rightfully taking what they've earned.

Paul the Player says: Oh boy. Well, in a way I was kind of doomed from the start, thanks to a misinterpretation of how the galaxy-building rules in Twilight Imperium work. Being blocked in by a supernova and an ion storm really worked against how quickly I could expand, and it was really frustrating to see other players out-produce and out-tech my empire while I was struggling to get anyone to simply exchange trade contracts. It also didn't help that the Xxcha's racial abilities are great to have during the political parts of the game, but since the other players were more interested in blowing each other up and climbing the tech tree than engaging in bureaucracy and passing agendas, they didn't see much use. 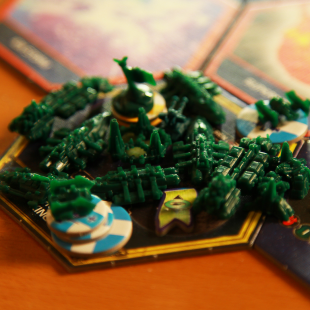 In hindsight, I should've given up on banking on a defensive, diplomatic game and gone straight for full warfare, focusing only picking up tech that made my ships fight better and putting the serious pressure on Josh. Especially since his territory was the easiest way out into the rest of the galaxy, and he didn't seem to make much effort to keep me on friendly terms (seriously, blocking me out of trade early in the game was a real jerk move). I definitely shouldn't have ceded Everra back to him once Justin put his massive military might on the board - I thought it would help against Justin, but since Josh (along with Janelle and Greg) quickly made short work of Justin's advances without Everra's help, I should've kept a tighter grip on it.

That was probably my first major mistake of the game, and given Josh's tendency to overcommit his forces - taking out his completely undefended space dock mid-game being a prime example of his problems organizing his forces - I could have probably kept him on the ropes for a long while if I had . Lessons learned for next time; fortune favors the bold, and never give up what you've taken without a fight.