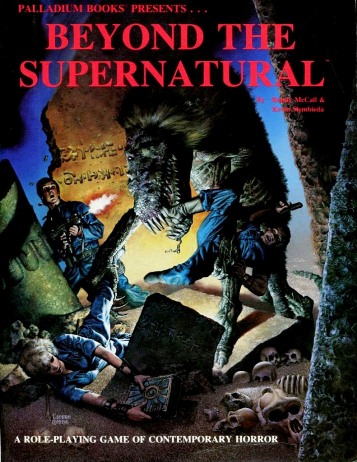 The Gauntlett is a new weekly column here at The Escapist, where roleplaying expert Adam Gauntlett talks about the best there is and ever was in smart roleplaying games, from horror to history and beyond.

Just looking at that cover brings back all kinds of memories. True, this is a horror game, but there's none of that Secrets Man Was Not Meant To Know crap here. Those heavily armed heroes facing off against Big Hairy know better. 'Secrets? EAT LEAD, SUCKER!' Followed by heavy machine gun fire and mysterious thermal energy from the Arcanist. The guy with the Uzi looks a little worried, but he's standing his ground like a champ. Full auto fire? Sir, Yes Sir!

The 1st Edition is the fun one, the one with the monsters and the magic rules in it. Though there is a 2nd edition, published 2005, I wouldn't recommend seeking that one out just yet. The 2nd Edition was published without any magic rules or a bestiary, two omissions which make the game all but unplayable. Since the rules are interchangeable die-hard Palladium fans might work around that problem, using other Palladium properties to fill in the gaps, but the rest are better off saving their money. If Palladium ever gets round to publishing Tome Grotesque and Beyond Arcanum then the 2nd Edition might be worth a look, but I wouldn't hold your breath. Those two have been Coming Soon for donkey's years.

So what do you get for your money? A complete ruleset, including nine Psychic Character Classes (P.C.C.s) and rules for non-powered Victims, the magic system, psychic abilities - everything from Carrie-style pyrotechnics to more subtle sensory perception powers - a brief description of the game world including its ley lines and mystic places, an interesting bestiary about thirty monsters strong, three short scenarios, and stats for a bunch of firearms and pointy things to skewer the monsters with. Want to unload on that vampire with a .44 automag, the same handgun used by Mack Bolan and Dirty Harry? No problem! Prefer to slice and dice with a katana? Can do!

Right away you can see the main philosophical difference between this title and its major rival at the time, Call of Cthulhu. The CoC of that era was pretty gung-ho and where's-my-dynamite, but even then it assumed that the PCs were vulnerable, weak creatures whose Sanity or Hit Points would give out long before they got too close to the heart of the Mythos. BtS, by contrast, has a Horror Factor mechanic, which amounts to a d20 saving throw. Fail your HF check and you lose initiative for the round, stunned with the awfulness of it all, and can't defend against the monster's first attack. After that, you're fine. I've seen CoC games where one failed Sanity roll reduced a healthy character to gibbering jelly; in this game you could meet Cthulhu, shiver a little, then spit in its eldritch eye.

In style, it's very much in keeping with the era. This is the age of Chucky, Freddy Kruger, Christine, brain-munching zombies and those bloodsucking Lost Boys. Horror isn't about subtlety or psychic trauma, it's about kicking the door in and blasting away at whatever slavering monster's hiding on the other side. That doesn't mean your character can't die, but it does mean he's in with a fighting chance, even if he'll have to wade through an ocean of gore to do it.

The P.C.Cs include most of the ones you'd expect, and a few welcome additions. The Psi-Mechanic gets to channel her mojo into all the neat gadgets and weapons she builds. The Parapsychologist is no lab-bound researcher; his tools let him detect the enemy, while his limited grasp of magic lets him put the whammy on whatever's out there. The Nega-Psychic is so firmly convinced nothing's out there that, for him, the supernatural really doesn't exist, and magic stops working when he's around. The Arcanist is basically John Constantine or Angie Spatchcock, putting the hurt on the enemy and making deals with devils to get the job done.

Some of the character types feel a little dull - who'd be a Latent Psychic when you could be throwing fireballs around as a Physical Psychic? - and the character creation rules are, by modern standards, clunky. The games I play these days spend maybe half an hour, even with new players, on character creation. Experienced players could easily spend twice as long on a BtS P.C.C. That said, it's a well-thought out character list, and it benefits from the welcome inclusion of non-powered Victims, changing the nature of the game. What was a gun-toting psychic firework display becomes Oh Shit, It Saw Me, as these quivering mundanes try their damndest to stay alive.