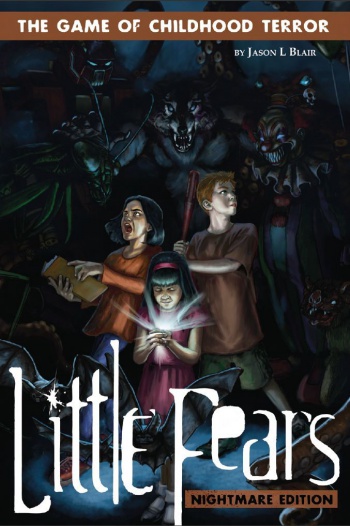 Remember when you were young and you were afraid of all those things that went bump in the night?

Ever wonder where they went?

These days Jason L. Blair is best known for his work on the Saint's Row franchise, but once upon a time he was lead designer and writer of a chilling RPG called Little Fears. Back in 2001 this tabletop game took kids to Closetland, a nightmare realm ruled and run by every terror they can think of, and more besides. Would they get lost in the darkness, becoming prey to the monsters, and crazed monarchs, that stalk Closetland? Would they triumph over impossible odds, and beat Closetland's creatures?

The 2001 version featured a darker Closetland, ruled by the Demagogue and his Kings. It won RPGNet's Most Disturbing or Controversial Game Award, and was a nominee for two Origins awards. Later, when Blair decided to reissue Little Fears in 2009, the content was toned down a bit. The Demagogue and his Kings went out the door, the ruleset changed significantly, and the nightmarish content became slightly more fantastical. 'The world is a scary place, especially for children,' says the 2009 Nightmare Edition, 'The world they live in is full of rules, but the rules are not their own.' That's the version you're most likely to find, if you go looking for it online or in one of the few shops to stock it.

Then in 2011 Little Fears crept out of the dark again, this time as a Tenth Anniversary edition. This version is a faithful recreation of the 2001 original, complete with all the supplemental material for the 2001 edition plus some commentary and rules errata. This one-off is still available, but the print edition can only be had direct from the publisher; the PDF is available via DriveThruRPG.

I was fortunate enough to be able to talk with Jason Blair, and ask him about his sinister RPG past.

Adam Gauntlett: Describe Little Fears to someone who's never heard of it before.

Jason Blair: Little Fears is a tabletop game about kids fighting monsters in a land called Closetland. They have the power of belief on their side, which is the power to have that baseball bat hit with fire, or have the teddy bear come alive and protect you, or, by walking around your bed three times, seal and protect it from monsters.

AG: Little Fears is how you got your start back in 2001, as Editor in Chief of Key 20. Who was Jason Blair before that? How did you get to that point?

JB: Well, Key 20 was my own publishing house, so I was everything. Before that I was just a young twentysomething who knew he didn't want to spend his life doing something he didn't love. So, with a lot of support, I put together some money - this is before print on demand really became a thing, and before PDFs were as convenient as they are - I had to do a full print run, get that up and going. I commissioned my own art, learned layout, learned Photoshop, Pagemaker - which is what was available then - learned how to talk to printers, to sell at conventions ... it was a very busy year and a half, getting Little Fears up and going! That got me started in tabletop, and then I transitioned from there to video games, which is where I am now.

AG: You mentioned PDF in passing a second ago, and I wonder if you wouldn't mind expanding on that, bearing in mind that the original Little Fears never got an official PDF release.

JB: Right! This is back in 2001, before the advent of DriveThru RPG and other sources, Paizo and whatnot. PDFs then had to be set up either set up on a website for someone to download, or you send me money and I mail you the PDF. Which I did for one of the supplements, When the Monsters Came, but that was the only one. It wasn't nearly as convenient as it is now, when you can get it up and running on a service that handles all of that for you. It's much easier for the customer and the publisher!

AG: Little Fears is an Origins nominee for best RPG and Game of the Year (2002), as well as a winner of RPGNet's Most Disturbing/Controversial Game award. How controversial or disturbing were you hoping it was going to be?

JB: [laughs] I wasn't hoping! It's funny ... Little Fears started off as the game of children fighting werewolves. That was the first session I ever ran, and then I started building the cosmology of the world, of Closetland, where all the childhood fears take form. I gave a mechanism for creating any monster you cared to cook up, a framework to do that. Then I started to do the research on childhood trauma, things like that, and that kind of steered the game towards being really dark. I had to take a step back ... you know, it wasn't really graphic, it was never an abuse simulator or anything like that, but it did deal with some of the horrible things that people do to kids. I actually dialed it back a lot, before the release of the first edition. But the research led me to develop a lot of empathy towards people who had less than ideal childhoods. Mine was a typical Middle America childhood, no trauma to speak of, but not everyone's that lucky. I tried to honor them, in a way: not excuse the things that happened to them by saying 'oh, it was monsters,' but being very real about some of the things that kids are exposed to, either directly or indirectly, and kind of speak to that.

At the time nobody was really talking about that sort of stuff in the RPG space. Teenagers from Outer Space [R. Talsorian 1997] and, I think, Alma Mater {Oracle games 1982] came out before Little Fears, but that was it, and nobody had written a game about being little kids. That was the number one obstacle. People were like, 'I can't get my group to play kids.' Part of it was the darker aspect, that's where all the controversy came from; which was really only two pages about one of the Kings. That's it! Closetland has seven Kings, each modelled after one of the seven deadly sins, and of course, one of them is Lust. The Defiler was the King of Lust. Obviously that's one of the most horrible aspects of the game; there were a lot of slights against my character, but also I heard from a lot of people, child psychologists, Andrew Vachss the author and child advocate, and they all supported Little Fears. That was mind-blowing, to have all these people who, in their professional lives, dealt with the very real aspect of child trauma, saying 'yeah, you're doing the right thing.' There was lots of controversy, but the support outweighed it greatly!