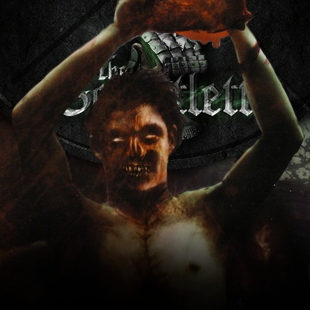 Frank, a mortician, stares, horrified, at the plastic garbage bags that Burt's two employees just brought in. Whatever's inside them is wriggling, slowly, almost menacingly.

"Burt, what the hell is in those bags?"

Burt tries for a grin, but it goes all lopsided. "Rabid weasels."

Return of the Living Dead, Dan O'Bannon's comedic response to George Romero's Night of the Living Dead, is the first time zombies uttered that immortal cry, "Braaaains!" It's also one of the few times they actually ate 'em; O'Bannon paid a premium to any actor willing to chow down on animal brains, onscreen.

There's no shortage of zombies in gaming. But if you want a tabletop game with all of Return of the Living Dead's brain-munching verve, and a healthy dose of Night's paranoia, plus everything else in between, you need look no further than Eden Studios' All Flesh Must Be Eaten. All the joys of the zombie apocalypse, pulsing with 245 Trioxin, ready and raring to go!

AFMBE pits the characters - or survivors, in the game's jargon - against the walking dead, whether at the beginning of the apocalypse, or years after civilization crumbled, under relentless assault by brain-munching ghouls. Exactly what kind of apocalypse is up to the Zombie Master; the main book provides eleven different Worlds in Hell, as well as elaborate zombie creation rules to fashion your own apocalypse, and Eden's since published many other possible backgrounds and settings. Pirate zombies, kung fu zombies, pulp zombies, Wild West zombies ... there's nothing these ghouls can't do, and that includes putting on the crimson face for a WWE smackdown.

AFMBE uses the Unisystem, originally developed for C.J. Carella's WitchCraft game; it's designed to give the Zombie Master as many options as possible. Like dice? The dice system is the default option, but if you're not a fan of random chance, there's a diceless version too, or a card-drawing version, or even a story-driven version with no randomizer whatsoever. Pick whichever you need to get your game going.

It's a system designed to be invisible, says M Alexander Jurkat, one of those involved in the creation of AFMBE from the beginning. "It's meant to involve a very shallow learning curve, then disappear into the background of the game session and the players' consciousness," he says. "Unisystem stories should have an overwhelming story component and a very small rules component."

Character creation is pretty simple. You're either a Normal, in which case you get a few generation points and my best wishes for your future, or a Survivor, in which case you get more generation points and might live past the halfway point in the movie, or an Inspired. Inspired are special little snowflakes with access to supernatural abilities, which definitely gives them an edge in the grand lottery of life. Character creation will take a little bit of explaining, and may be difficult for those who've never played tabletop before, but once everyone's got the hang of things it shouldn't take longer than half an hour to design a character. Then it's time to meet the zombies! What are they? Where did they come from? Can they be put down, or is this the end for Frank and Burt?

Why does AFMBE exist? It's all thanks to Resident Evil, says George Vasilakos, the brains behind the operation. Playing through its zombie-bashing action, he realized that something like Resident Evil would make a great tabletop game, and at that time nobody else had tried to bring a full-on zombie apocalypse to the tabletop RPG marketplace. There was some thought he might do it as part of White Wolf's World of Darkness, but White Wolf's world really wasn't calibrated with zombies in mind.

Besides, Vasilakos felt, the zombie apocalypse genre really isn't about telling just one story. There are a whole bunch of different stories, different settings, to play with. George wanted to give prospective Zombie Masters a toolbox to design as they pleased, not a full-fledged setting with its own rigid backstory, and that meant he needed to go his own way.

"When I talked to other people about this approach," he says, "Distributors/retailers didn't think it would sell because at the time it was all about the settings' story - like 7th Sea, Legends of the 5 Rings, Deadlands - but we wanted to do something a tad bit different."