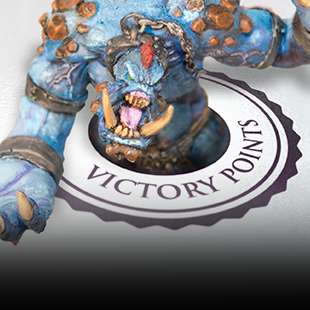 Victory Points is a new weekly column here at The Escapist, where veteran miniatures gamer Joe Perez gives out wisdom and advice about the craft, art, and play of miniatures games - from Warhammer to Warmachine, Infinity to Flames of War.

Warmachine and Hordes are one of the most popular miniatures skirmish wargames on the market today, but not too many people outside of the minis hobby know about them - or how easy they are to start playing. They're a tabletop wargame by Privateer Press that takes place in a magical steampunk style world. Units range from regular military style units of gunners and pikemen to mechanical steam and magic powered constructs as well as dragons and undead monstrosities. They're a 30mm wargame played on a four foot square playing area. When first taking a look at the game, it is easy to write it off as the same as all the other tabletop wargames, but there are a number of things that set it apart from the rest.

First and foremost, Warmachine and Hordes are companion games. They both are capable of standing alone in their own right, but can be played against each other as they share the same basic rule sets. This is also maintained by the game worlds stories as forces of both Warmachine and Hordes routinely square off, and are all intimately interwoven. Warmachine is more about the, well, machines of war that combine science and magic to engage in battle across the game's world. Hordes deals more with the monstrous side of combat, with hulking huge monstrosities and creatures of incredible power. The game combines fantasy and science fiction giving you everything from androids to elves as well as giant robots of destruction and tremendous dragons. It has a little something for almost everyone.

Emphasis is placed on skirmish sized battles, smaller engagements between forces, as opposed to large unwieldy armies that players may be used to in other game systems. This is shown by the point cost of the forces you control having a minimum of 15 points, to the tournament level totals of 35 and 50. The forces you wield however, tend to be tougher as well. Comprising of units, characters, and machines of war that all can take multiple points of damage before they are removed from play. While the game does allow for larger engagements up to whatever size the opponents agree upon, these smaller games are the focus of the rules. For those of you who are used to other games the point value may seem a bit low, but you are still able to field a number of units and special characters to have a complete army. All stats for all units and characters are included when you purchase the models, contained on easy to read and transport cards. You are not required to purchase supplement books just to use the models in your armies.

The game has the distinctive feature in the inclusion of warcasters and warlocks, and their attached battlegroups. Warnouns are powerful spellcasters and generals who have learned to control warjacks and warbeasts. They can fill multiple roles from front line fighters dealing massive damage in melee and range or welding destructive magics to rain down devastation on their opponents, to support roles of healing and buffing their units. Each caster has a list of spells that they can utilize as well as a special feat that can be used once per game that has the potential to change the entire engagement for a small duration. 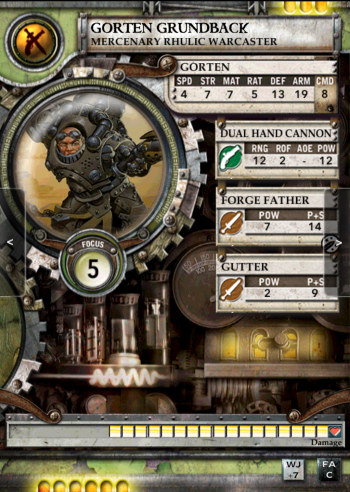 Warcasters control either large engines of war called Warjacks or creatures from the wild trained for war called Warbeasts. Warcasters use a resource to power these behemoths and make their attacks hit harder, make them move faster or to perform special attacks. This is a rule in the game called boosting: Normally all attack and damage roles in the game are made using two six sided dice, however casters and other characters that use focus or fury can spend a point of the resource to add an additional six sided dice to the roll and include it in the results. This allows for players to make more calculated plays and reduces the need to rely on pure luck to always hit your attacks or to deal damage. The resource is finite, so players have to choose carefully when to boost and when to save it for other things or use it to boost.

Due to the size of encounters, there is a lot more emphasis on aggressive play. To do this, the game relies on scenarios, which are included in both the rule books as well as available for free download from the Privateer Press site. In each scenario there are objectives or scoring zones which are always placed between the two forces about to face off. This ensures that players have to engage one another, or at the very least move towards one another, in order to score points. Some scenarios introduce something called a "Kill Box" which deals damage to all models left in the deployment zones after a certain number of turns has passed, adding incentive to moving your units forwards. On top of scenario play, there is a rule that is always in effect and that is if you kill your opponent's warcaster you win the game. When the warcaster dies, the troops are without leadership, warjacks lose the source of magic fueling them and warbeasts run amok no longer contained by the warlock's willpower. These are called assassinations, and add a very interesting dynamic to the game when you consider that the caster is generally both the most powerful piece of your force. Players have to think carefully about where to place their casters to obtain the maximum effect of their spells and abilities while simultaneously keeping them safe. It helps ensure that no matter how bad of a game you may be having, you always have a chance to pull out a victory.