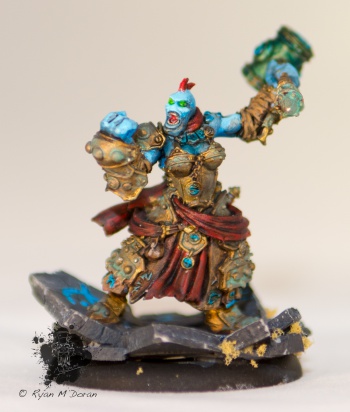 Some may find this interesting, but over the course of the last 10 years that the game has been around, the story of the game has been constantly evolving. Every new book or unit is accompanied by fluff explaining that units place in the game world as a whole. Characters grow and become more powerful as time goes on, often having multiple versions, and this allows for the constant additions of new models, new forces and new scenarios. Force books as well as the rule book itself contain quite a bit of the story surrounding the game world, and help to explain how each faction interacts with one another and why exactly each faction fights.

It's a distinct difference to note compared to other mini wargames, where the story remains unchanged for incredible lengths of time. This is a big thing because it helps to keep the game fresh and feeling new and exciting, even for players that have been participating with it for years. One of the problems that many tabletop war games face is a feeling of being stale after long periods of time, and they tend to focus on gaining new players instead of keeping the old ones. Here, Privateer Press endeavors to keep things fresh and exciting as often as they can.

There is also a lot of care taken in balancing the game with rules and model stats, and errata is released whenever updates are made or new mechanics or abilities added. Privateer Press also goes out of their way to respond to players when rules questions come up and ensure that the answers are distributed quickly. While skewed armies are possible, defeated skewed lists are equally as possible. The game is overall quite well balanced and places a lot of emphasis on strategic play and decision making over anything else.

Entry into the game is fairly easy and rather inexpensive when compared to other miniature wargames. Battleboxes are available and contain a warcaster and a battle group as well as a quick set of rules and stat cards for all models included. In one box you get almost everything that you need to get started playing right away. Battle boxes can be purchased for $49.99 USD directly from Privateer Press, or potentially cheaper from your local gaming store or online retailers. There is a box for every faction in the game, and each is specifically designed to give you an idea of how the faction works with their particular mechanics and background story. As far as miniature wargames are concerned, that is far cheaper than the barrier of entry somewhere else.

You will also need around four six sided dice, tokens to track focus and fury and status effects and a ruler or tape measure of some sort and a dry erase marker to mark off damage. Tokens can be purchased for your faction that include all status effects you will need for all of your games for as long as you play as well as points for fury and focus and blank tokens that you can write on with dry erase markers. While not necessary, they do make things much easier. You can also use beads, pennies or really anything else you want to count as your focus and fury and just use scraps of paper for your abilities and status effects.

Playing the game, you feel more like a commander and less as if you're just rolling dice for the sake of rolling dice. One of the largest problems in a game in which you rely on dice to carry out your actions is the feeling of being at the complete mercy of random number generation. While there is still an element of chance in Warmachine and Hordes, you can take measures to lessen impact a failed roll will have. The inclusion of multiple ways to win a game at any given point in time helps to make players feel more in control of their forces and allows you never really feel completely defeated. There have been games where I was losing the scenario only to pull out a last second assassination run, and I have had the same trick pulled on me. Games feel engaging all the way to the end, and players feel involved and invested in the game the entire way through. It is rare that players feel completely overrun, or that games feel one sided.

So go out there and get casting.