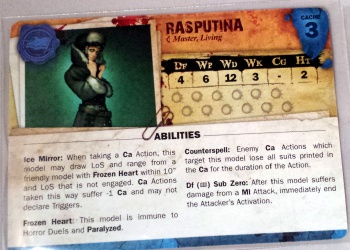 The game itself is played on a 3 foot by 3 foot square surface area. Terrain can vary largely depending on what the scenario is you are playing or what you and your opponent have agreed upon. Crews and upgrades are purchased or hired out using a currency of Soul Stones, the very same stones from the fluff and lore. This is your point value for determining game size. Average game sizes are between 25 and 40 Soul Stones in size, and depending on your faction will fall in between 5 and 10 miniatures in a full crew. Any unspent Soul Stones are added to the master's pool of soulstones, up to a maximum of 8 and can be used as a way to boost certain actions throughout the game. Crew masters have a value on their stats that will tell you how large their initial starting pool is, and unlike the crew members you hire out with your Soul Stones, masters are free - but we'll cover soulstones further in a little bit. You can win a game by completely eliminating your opponent's forces or by completing the mission objective in the scenario. Even if your crew leader dies, you can still win the game.

Character stats are broken down into six categories and are used to determine the various actions your characters can take on their turn.

Wk/Cg - Walk/Charge: This is the distance in inches a model can move as a standard action or charge action

Ht - Height: Normal humanoid sized models have a height of 2, where larger and smaller models will have varying numbers. This will determine what openings a model and move through, as well as how easy they are to hit.

Wp - Will Power: This is the guts of the model, or how strong willed they are.

Ca - Casting: This is the magic stat, used for casting spells or using certain special abilities.

Df - Defence: This is how hard it is to hit the model and will be used frequently.

Wd - Wounds: This is the health value for the model and will determine how much damage it can take before it is removed from play.

There is an additional stat, Combat, which is assigned to weapons and spells. This stat is used when determining damage dealt to a target.

Model activations happen in alternating fashion, each player takes a turn activating and completing all actions with a single model until all models have had one activation that turn for both players. This allows for much more tactical gameplay, and makes turns much more dynamic as players can react in real time to what each other are doing rather than having to wait several minutes for their turn to come around. Each model during an activation has a number of actions they can take. A standard minion or non-character has two action points per turn and one zero point or free action. Standard action points are used to purchase certain actions for your models. Walking your allotted distance costs an action point, as does making an attack or casting a spell or ability. Some actions will cost two actions points such as higher damage spells or abilities or completing a charge (move and attack). Players also have the option of taking a focus action, which costs one action point but when making a check using cards they are allowed to turn over two cards and choose the highest. Think of it sort of like aiming your shot to have a better chance at hitting. This creates engaging gameplay and keeps players involved throughout the game. Most tabletop miniature wargames tend to allow one player to make all actions with all of their models or units during their turn, while their opponent waits for their turn. By allowing for alternating activation of models, this helps to create the feel of a swirling gang skirmish, as well as keeping players involved in the game at all times.