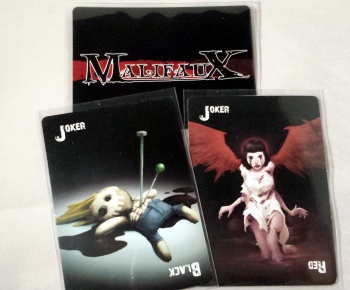 One of the most intriguing things about the game, and normally the first thing people notice, is that the game is completely diceless. In keeping with the Weird West theme, instead of dice each player has a deck of fifty four cards, a basic poker deck with the two joker cards included in the sequence of play. The suits are altered, however, to fit the game world and form the basis of the core factions in the game. Clubs become Tomes, Spades become Crows, Diamonds become Masks and Hearts become Rams. At the most basic level the system uses model stats added to a card taken or flipped from the deck to determine results. In the event of a duel, such as one character trying to hit another, the total value is compared against your opponent's core stat. So for example, to hit your opponent, as the attacker you would take your combat value and add it to the card you flipped. Your opponent would then flip a card and add it to their defensive value and the results determine the outcome of the duel.

Not only do you use the cards to determine if you hit, but you also use them to determine damage. Spells and weapons have damage bands, broken down into weak, moderate and severe. This is normally represented in the stat cards as 1/2/4. When an attack hits, you flip a card to determine the severity of the damage dealt. Face cards with a value of 1-5 are weak damage, 6-10 is moderate or middle damage and 11-13 is severe. Once damage has been flipped, and the band determined, that amount of damage is applied to the target model. Some spells or abilities have what is called a trigger, or a special occurrence that can happen. This is signified by a suit type next to the ability, and if you flip a card with that suit, you gain the trigger ability as well. This can range anywhere between extra damage to special effects like rooting a model in place or pushback. 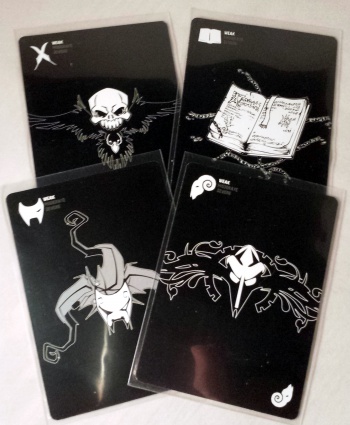 In addition to the suits, there is a black and a red joker. The black joker is a bad omen, and has a face value of zero. Think of this as a natural or critical failure. The red joker is a good omen and has a face value of fourteen or as a natural success. If the black joker is flipped for damage, you deal no damage and if flipped in a duel it cannot be replaced in any manner and must stay as the card drawn for that ability. If that wasn't bad enough, the black joker has no suit and cannot be used for trigger abilities, making it truly the lowest card in the deck. The red joker is the ultimate success. Not only does it bear a face value of fourteen, but if flipped for damage it will automatically cause severe damage. In addition, when flipped for damage it will allow you to flip an additional card which is added to the damage. As icing on the cake, the red joker can be assigned any suit you wish when played, meaning that unlike its friend the black joker, you can use a red joker for triggers and special abilities. It is the ultimate draw in the game of Malifaux and is comparable to a critical hit. The only downside is that if you are ever in a situation where you flip multiple cards and you flip both a red joker and a black joker, the black joker overrides your red joker and you fail, miserably.

The system also encourages what is referred to in the rules as "cheating". Players start their turn with a control hand, a draw of six cards, like a modified poker hand. The players maximum hand size can be changed depending on the models they are using in crew. Some masters grant larger hand sizes, while others allow you to draw more and choose which six to keep. When you flip cards from your deck to take actions, you may choose to cheat your flip by replacing the card with one from your hand. You can do this to ensure the hit, or because a specific suit may be necessary to trigger an ability. You can also cheat to defensively, preventing your opponents actions from successfully completing. This can be done to to keep your pieces alive or just shut down your opponent. In both cases though, once your hand is depleted that is all you get until the next turn, so you will have to decide carefully when it is advantageous to cheat or not.

It is an interesting mechanic because as the game progresses and hands and cards are burned or discarded, the actual probability of the game fluctuates. This adds additional tactical decision making to the game and allows you to have some further control over the odds, at least a little bit. At the end of the turn, all players shuffle their remaining hands and discarded cards back into the deck in preparation for the next turn.