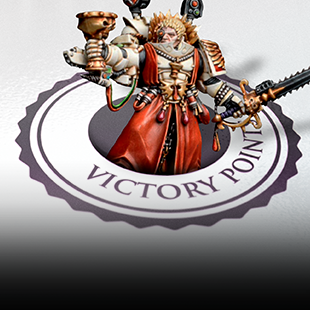 December is the month of angels for Games Workshop, as one of the most iconic Space Marine armies finally receives a new Codex for the new edition as well as new miniatures. Blood Angels are the sons of Baal, cursed with an affliction or defect in their gene-seed known as the Red Thirst. An affliction that causes the Blood Angels to want to drink the blood of their enemies in an almost vampiric manner. This plays into the iconography of the army as well as the fluff, with fury being a huge theme, and their symbol being a winged drop of blood. They were one of the first space marine forces to be highlighted in the 90's during the era of Second Edition Warhammer 40k, a time where there were only a handful of specialty chapters and rules for space marines.

The new codex will release in the hardcover format that all other books have been released in recently, and the first thing that players will note aside from the awesome cover art is that there is a slight rebranding on the front of the book. No longer does it say Codex Space Marines, instead it now displays the true name of the angels of death, Codex Adeptus Astartes. While this seems like a small change, there is a lot of speculation as to whether or not this is a reaction to the recent perception of the company as a big bad. There have been several instances in the past of Games Workshop attempting to put pressure on other entities to get them to cease use of the term Space Marine, and it would seem that reverting to the classic name for the Emperor's Warriors is a great and easy way to move away from that. It also comes after statements from the new CEO, Kevin Roundtree, in November of 2014 that the company would be moving in a "New Direction." Now, while nothing more concrete was ever pinned down, this seems like it may be the first markings of a shift.

Other than the sub title change, the codex is what players have come to expect from recent releases. Hardcover with the lay flat spine, gorgeous artwork and a plethora of new and updated rules as well as unit changes. The book highlights the fast, aggressive, in-your-face nature of the army, and helps highlight their constant battle with the red thirst. Let's talk about some of the major changes.

● All troops suffer the Red Thirst
● Death Company and the Death Company Dreadnought are now Elite troop choices
● Baal Predator is classified as Heavy Support though can be upgraded to fast
● Librarian Dreadnought is a Head Quarters choice
● Mephiston is a Head Quarters choice and Infantry Character
● Dante and Gabriel Seth are Lords of War Infantry Characters
● Only troop choices available are Tactical squads and scouts.
● No access to new units such as Centurions or Stormtalons.

Red Thirst gives your troops +1 Initiative on the turn in which you charged, unless they've made a disordered charge. This may not seem like a lot, but that stat bump can make some incredible things happen. When you take into consideration that Blood Angels are traditionally very assault focused, this is a perfect pairing. It makes even the most basic troops a little more potent, and a few assault squads with that buff on a charge can cause opponents to change their strategies pretty quick.

The Death Company moving to an elite troop choice is something that I'm surprised wasn't done sooner, as it fits in with the fluff of the army. The Death Company are comprised of Blood Angels that have fallen to the Black Rage, the psychosis that goes hand in hand with the Red Thirst. The Black Rage turns those who fall under it to become frenzy maddened warriors who seek death in combat and have abandoned almost all reason. They are placed into the Death Company under the watchful eyes of a Chaplain and spurred into battle after battle until death claims them. They are revered by their battle-brothers and are treated with respect and honor, so their inclusion as Elite Troops makes sense.