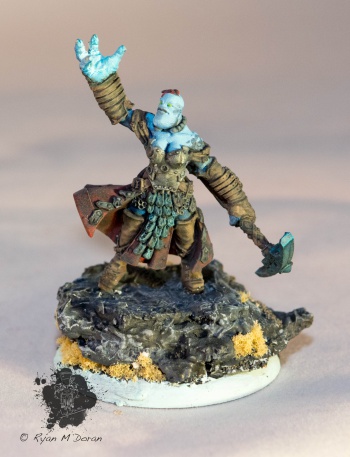 Privateer Press is the company behind Warmachine and Hordes, and we have talked about them in the past and the most basic elements of the game that has been taking over a large section of the mini wargaming scene slowly and surely over the last 10 years. One of the biggest claims to fame though is that, as a company, they care very much about the balance in the rules. They are constantly revisiting and re-evaluating rules, releasing updates not only through errata, but also through their yearly tournament support in the form of the Steamroller Tournament Rules. These rules contain all the updated scenarios and special conditions that make up the foundation of all Warmachine and Hordes structured play. This is the framework that all tournaments, campaigns Privateer Press is one of the few game companies that not only supports the official tournaments with prizes, but they actively host tournaments for the players. This past week, we have seen the big release of the new Steamroller 2015 tournament rules and packages, and while that is certainly noteworthy the big news is the changes to the changes to the Masters Tournament Format.

Masters Tournament play is one of the premier tournament formats available to players. The other two are hardcore and Iron Gauntlet. This level of competitive play takes that framework of the Steamroller rules, and imposes a set of restrictions on players to show a higher level of gameplay. One of the goals set forth by the Masters rules was to showcase players who have a very deep understanding of not only the rules, but the units that comprise their chosen faction, while showing unique and interesting gameplay. One of the problems though is that as with almost all competitive gaming, players began to gravitate towards similar army lists, boasting the same casters, and not really showcasing the depth that each faction has available to it. Players crafted three set 50 point lists, and choose which list to play against their opponents. While it seems like that would offer a lot of variety, it did the opposite. If you're familiar with Magic The Gathering, it is a similar phenomenon where someone crafts a deck and does incredibly well with it and then next thing you know every player at your local level is replicating the winning deck. One of the big changes here to the masters format this year, is that it is no longer a three-list format. That is a huge change, forcing players to have to make hard choices on what lists to bring as they won't be able to just make an all-comers list with some specialty lists to support it. This will mean that two players playing Trollbloods are far less likely to have the same two lists as each other. This leads to the second large change.

Another goal was to incentivize players in these tournaments to be more creative in their list building, and help to promote diversity in gameplay. A new rule has been introduced into the Masters format, The Active Duty Roster. This is a rotating list of four warcasters or warlocks for each faction. If players build both of their lists using casters from The Active Duty Roster, they get a benefit called a Vanguard. This allows the players to add 20 points of specialists to each of their army lists. Remember that analogy I used earlier comparing the repetitive lists to cookie cutter magic decks? Well, this is like having a sideboard in magic. This is a group of units or models that you can swap in and out as necessary. This allows for quite a bit of flexibility in list building. Now, the active duty roster is primarily comprised of uncommon casters, ones that do not see a whole lot of tournament play, and this is based off of previous tournament data.

Why is this Important?

This change is huge, not just from a tournament standpoint but from a game promotion standpoint. Every faction in Warmachine has a pretty large depth as far as casters go. There are ones that reward aggressive play, ones that focus more on controlling the field of battle while some buff their troops or do some pretty unorthodox things like call for a Mosh Pit in the middle of a fight. They all have their strengths and weaknesses, but when players look at competitive play and see only the same handful of casters being used repeatedly it tends to counter to the idea of all casters being useful. By incentivizing players in the larger tournaments to take traditionally looked over casters, they are helping to change that perception that X caster is so much better than Y caster. That's not to say that you still won't see some of the fan favorites still, and we're sure to see some familiar faces, but that extra 20 points is sure to entice more than a few players.

Not only with casters though, the added incentive will give players a chance to get super creative with their list building, as the casters on the Active Duty Roster will likely play a little bit differently, and that 20 point cushion means you can try out some strange combinations you never would have thought to try otherwise.The change to the format actively rewards experimentation and deviation from the known. While you can still use the same lists as always, if you choose to be daring. The number of surprises you can throw at an opponent alone makes it worth trying.

This may seem like nothing more than a marketing ploy, or a vehicle to attempt to sell more models, in part that argument does have some validity. As the lists begin to make their way through the Masters tournaments at the various gaming conventions across the world, emerging on to the internet and forums, yes you will see folks start to buy other minis for their factions that they may have previously skipped over because of the perception that they weren't the best choices. I think that this is a positive move to promote more diversity in list building across the board, and players at all levels can start to worry more about playing what is fun and less about playing what is competitive. There will always be the holdouts, but overall I think this is a smart move by Privateer press not only from a commercial standpoint, but from the view using a premier tournament format to promote diversification in army building. It also shows that they are willing to change the rules and set up not just for casual levels, but at the highest level of play on an international stage. It continues to assert that even after 10 years of life, as a company Privateer Press is still looking at their game and how it plays, and are always looking at ways to improve player experience. In a world where mini war gamers are starting to get spoiled for choice in terms of what game to play, that's something to keep in mind.