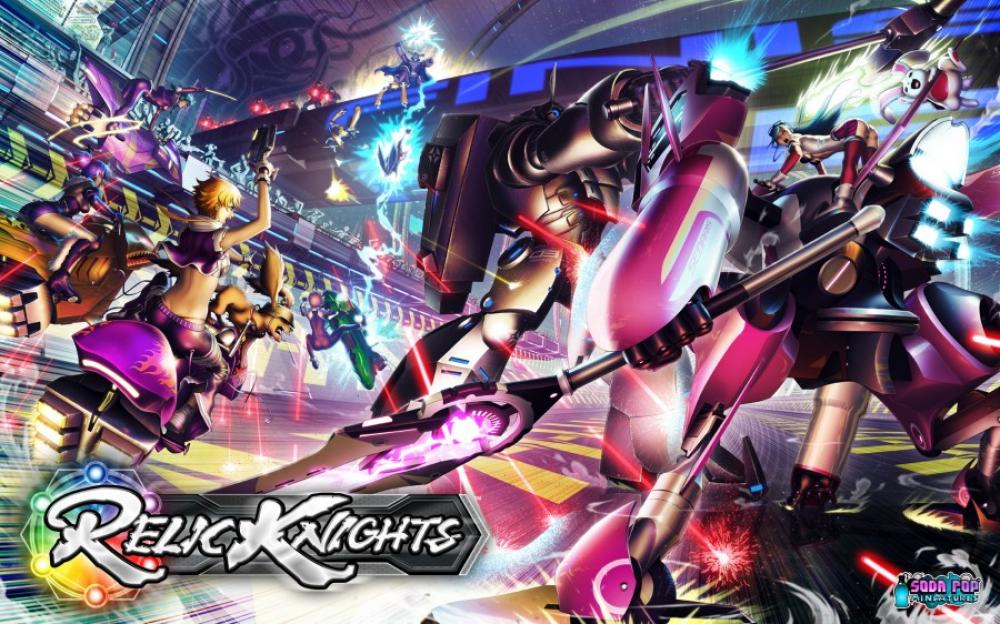 This past weekend I got to spend time with a miniature skirmish game that I have been keeping an eye on for some time now, Relic Knights. This project popped up on my radar during its Kickstarter campaign, but I haven't had a chance to sit down and find out what it was all about until now. This week we take a look at the game and models of Relic Knights.

What is Relic Knights?

Relic Knights Darkspace Calamity is a 30mm Tabletop Strategy battle game that emphasizes fast paced anime style combat. The game is from Soda Pop Miniatures, the minds behind Super Dungeon Explore. Players take on the role of a skirmish force in what could easily be an episode of your favorite anime. Battle takes place in a universe that is slowly being eaten alive by what is known as the Darkspace Calamity. Destroying entire systems and snuffing out all life within them. Force creation and the story really revolves around the Knights. These come in two flavors, Questing Knights who are still searching the remains of the universes as they are for relics of their own, and full Relic Knights who have already found their relics. Relics are extremely powerful devices, which manifest as something not unlike a giant mecha. Relic Knights are said to have the power to overcome the Darkspace Calamity. Each knights is bonded so a Cypher, a creature of pure Esper that finds knights that align with their goals. They grant the knights access to powers outside of normal mortals through the manipulation of Esper energy. The story takes these knights and their cadres to the Last Galaxy, the only known remaining space untouched by the Dark Calamity.

The game boasts a diceless combat system, with players using Esper Decks to power abilities, make special attacks or complete defensive maneuvers. This is a Specialized deck of cards unique to Relic Knights, and each card contains a primary and secondary Esper. Primary Espers count as two points of Esper while secondary counts as one point of esper. Only one type of esper can be chosen from each card face, unused esper does nothing in terms of game play. There are Six colors of Esper and each is accompanied by a symbol. There are also Void Cards, giant black hole faced cards that supply no esper, and are only there to take up space. Wild cards are ones with every color of esper on the face, and can be played for a single point of any color esper. Some abilities and units can store esper for later turns, such as Knight, which helps to maintain further control over what abilities you can do at a time.

The Miniatures and Factions 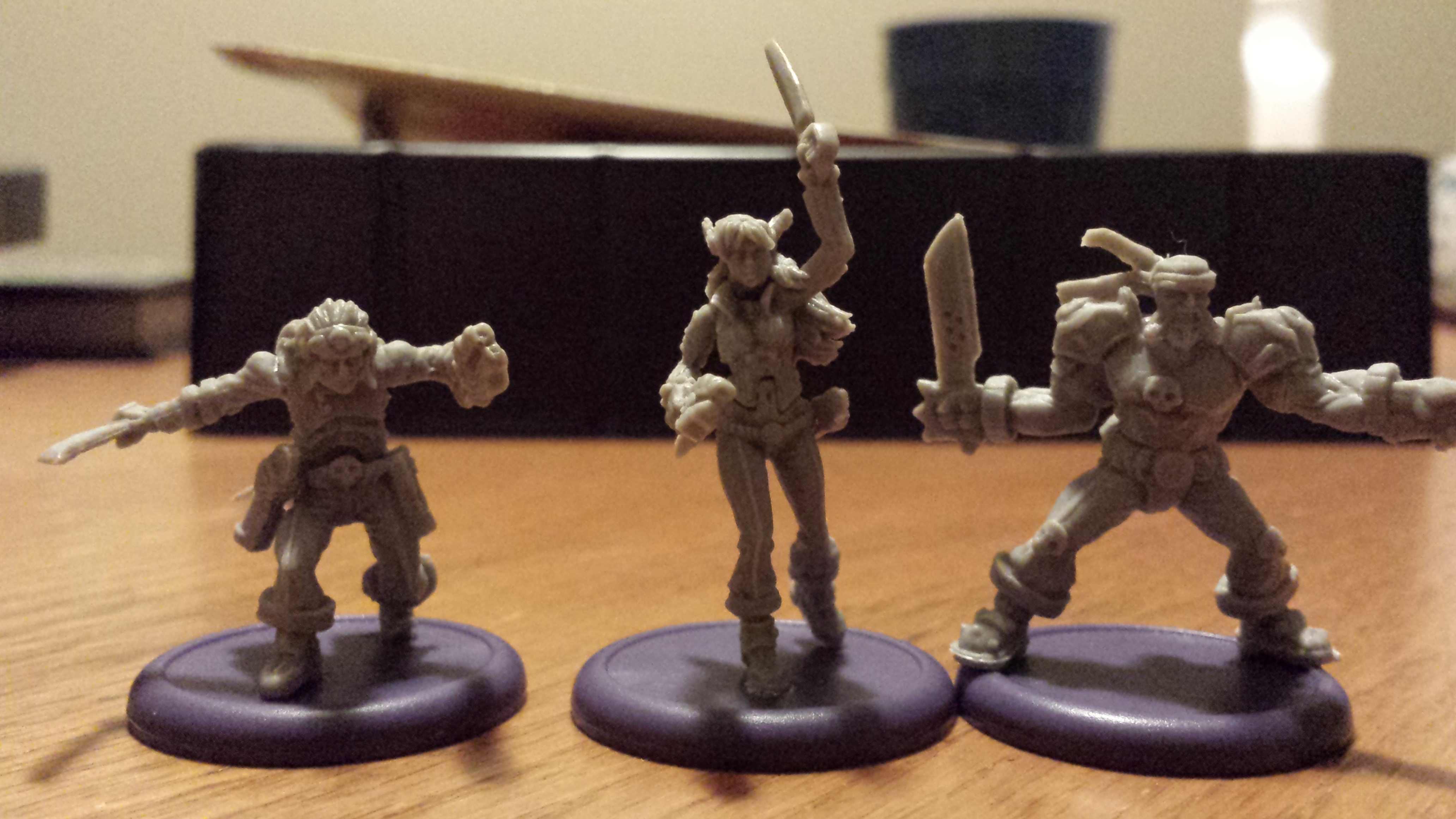 The miniatures are all made of a high quality plastic that is very similar to the same plastics used in games like Malifaux and Warhammer. They come as multipart kits that do require assembly and painting. The models are extremely detailed and construction is easy for the most part. There are some more complicated kits that require a bit of research to assemble correctly as instructions are not included with the models. Proportionately, the kits fit all of the basic Anime tropes, for all the good and bad that comes with it. Buxom women warriors, men of ridiculous muscle proportion, monsters of alien birth and of course giant mechs and giant guns. Each faction also carries with it a visual flare that is unique to itself, but reinforces the very anime feel. An interesting thing of note, is that the models do not come on sprues like other miniature games, the models are already cut from the sprues and are sealed in bags inside of the boxes that they are shipped in. From the ones that I have seen, there has been almost no mold lines or flashing to clear, which is rather impressive.

The rule book is an incredibly colorful hardcover volume that contains not only the rules on how to play the game with a very nice depth and clarity, but also all of the story for the game setting and each faction. This is an important distinction as most games of this nature have separate faction or army books in order to get the background story and all the pertinent game information for a factions units. Everything you need to know about the game, and the factions is contained inside one easy to read and vibrant volume.

The Cerci Speed Circuit is a group of futuristic high speed and high stake racers. The speed circuit isn't just a race track though, it's an entire planet devoted to the race. The faction is predominantly female and ranges from mechanics, to bike gang style racers and incorporates a hefty dose of roadside mecha. The faction is bright and vibrant, and made for neon colors. Every mech, every biker just screams speed. This is also reflected in the gameplay style of the faction, where almost every model's movement stat is the highest value on their cards. This is the faction for the players that want to bounce around the battlefield as super sonic speed causing all sorts of havoc

The Doctorine are the equivalent of space mages. They are a group that studies esper and how to manipulate the energy. Their Academies train the greatest sages, scholars and mystics of the universe. Their models look like nothing short of a fantasy wizards and magical creatures. Magical constructs, Werewolves and space wizards are all present. Flowing robes, magic staves and wisened scholars are all present. This faction has some of the most powerful spells and esper effects, and you can see that represented in the models. This is the faction for you if you want to have a little fantasy in your science fiction.

The Noh Empire are, for all intents and purposes, space daemons. They travel through space in their Dragon Fleet sacrificing bodies to their Hydra God and capturing slaves. They are led by warlords and priestesses and command terrible esper fueled magics and alien born monstrosities. They also have a very Japanese kappa motif, with their creatures, armor and weapons all bearing resemblance to to spirit masks and classic Japanese cultural items. It is incredibly fitting for an anime based game.

The Shattered Swords are space knights. Peacekeepers and the law and order, in a manner of speaking, in the game universe. Utilizing mecha that look like giant suits of battle ready armor, and holding the classic sword and shields you would find on any knights. Their elite forces are reminiscent of mechs out of the Gundam series, which is another great nod to the classic animes. Their forces tend to be a little bit slower, but they have a serious ability to defend against attack.

The Star Nebula Corsairs are space pirates, completely with bomb throwing maniacs and giant skull faced laser cannons. Eye patches, cutlass sabres and pistols abound, these models scream that they are ready for a boarding party like something right out of a Captain Harlock anime, and even the model of Captain Harker looks incredibly similar to one Captain Harlock. Their Relic Knight, Calico Kate even throws comically large bombs that look like cannon balls at her opponents.

The Black Diamond is a mercenary group that originally started as a private security group in the galaxy. Since the Dark Calamity they have become more centralized and organized, banding together into a cohesive military force. Utilizing experimental weapons and power suits their feel is akin to that of an anime military force with large guns and tanks. They look like something straight out of the grim dark future of 40k, only far more exaggerated in appearance. They look like they'll be at home in an invasion force or defending against the encroaching chaos of the Dark Calamity.