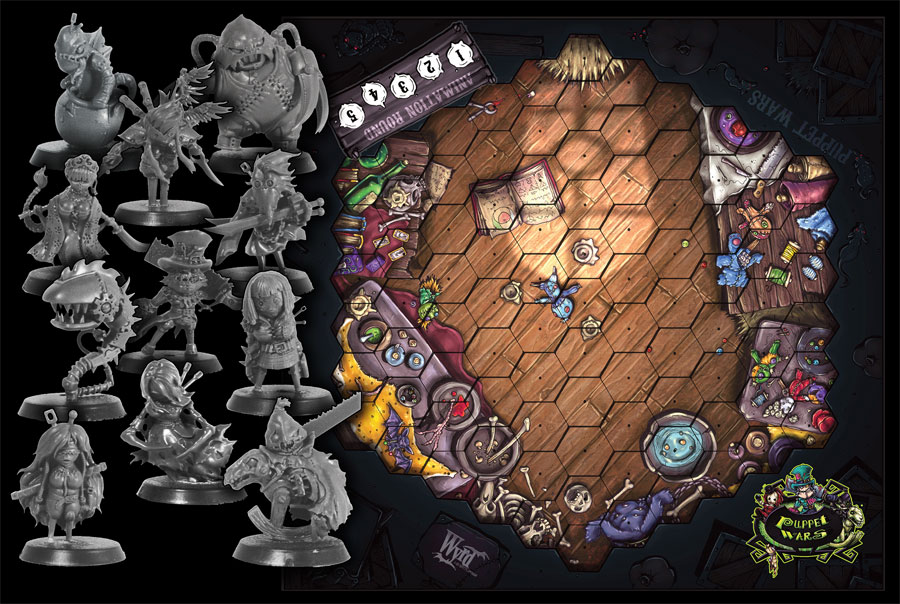 This gem of a game is produced by Wyrd, the same company behind Malifaux. It has recently become a favorite of mine as a way of introducing potential players to the mechanics of Malifaux and the no dice system it uses. Puppet Wars is a tactical board game that takes place in the same world as Malifaux. Players take on the role of Voodoo puppet versions of named characters from the Malifaux game that are animated through magic and try to act in the same manner of it's real life counterpart. Players claim workbenches, tear the stuffing out your opponents puppets and take pieces they've ripped off of and attach it to yourselves. The goal is to take out the lead puppet of your opponent. You build a tiny chibi warband before the game starts, similar to how you would build your crew for Malifaux proper. Puppets have stat cards just like regular Malifaux models, with attack and defense values and often times special abilities. You use a puppet fate deck to determine the outcomes of abilities. Players have a control hand, and use cards from their hand to activate models. The game teaches you the basics of the Malifaux game while adding some slight twists here and there.

The game plays between two and four players, and it is designed for fast paced action combat. Games tend to be fairly quick, usually clocking in at under an hour. It is great for people who are interested in the Malifaux game world, and is a great representation of the skirmish style combat. The current version of the game, Puppet Wars Unstitched, comes with 44 plastic puppet figures, two complete puppet wars fate decks that can also be used in regular Malifaux gameplay, an 18 square inch game board and all of the stat cards and tokens you need to play the game. It will run you $75 USD direct from Wyrd, and will come with enough for three players to play right away. Additional expansion puppet packs are available to accommodate more players. You may be able to find it for less online or at a local retailer, but either way you get a lot of game for your dollar. The models themselves are pretty awesome looking, and despite being very highly detailed, they are easy to assemble. Like many other games they only have one way to really go to be put together properly, and their smaller size make them easier to paint. The rules are about as complicated as most larger scale board games, but aren't too hard to grasp. The hardest part will be getting new players acclimated to the no dice system, but after a few rounds most folks will get the hang of it. It's a great gateway game for fans of the weird wild west and fantasy style games, and has been one of the best additions to my personal game inventory. I've been using it quite a bit to slowly introduce players to the concept of Malifaux. 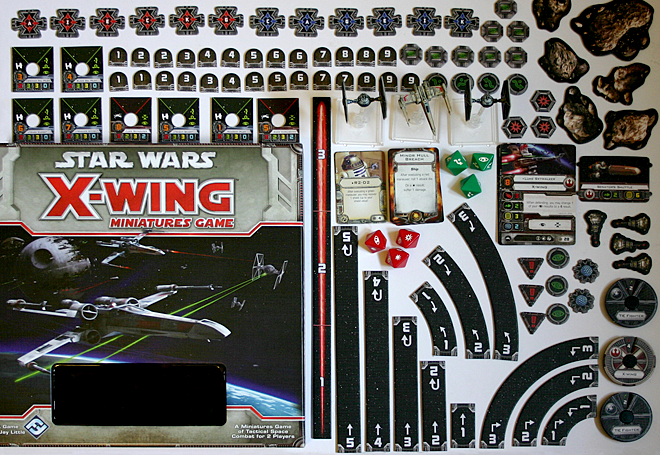 A game that has become incredibly popular in the last year is X-Wing from Fantasy Flight Games. I'm sure you've seen several pieces on this already here on the site, but it bears bringing back up in our discussion of gateway games. This is one of those games that just hit all the right notes when it was released. If you haven't heard about it before, it is a miniature space combat game set in the Star Wars Universe. It combines iconic ships such as X-Wings, TIE Fighters and the Millenium Falcon with fast game play with a relatively low learning curve. It is a dice based game, but uses specialty 8-sided dice, and all movements are forecasted. What this means is that players user a tool to select how far and what direction all of their ships move before they begin their activations, and keep this information secret until it's time to go. It's a form of simultaneous gameplay that makes the game incredibly engaging, and captures the space dogfighting feel that keeps things moving quickly. The game uses very limited terrain, if any terrain at all, so there is not a whole lot of setup. All you need is a tabletop and the game pieces. You do not need measuring devices of any type, as the game comes with special measuring sticks to use for all distance, direction and combat. While the base kit comes with card stock versions, there are acrylic and hard plastic versions as well.

The base game will cost you around $40 USD, and you'll get two TIE Fighters and an X-Wing, all of the dice and measuring devices and all the extras for the ships as well as various scenarios and pilot data cards for such fan favorites as Luke Skywalker or Briggs Darklighter. There are a lot of factors that make this a fantastic gateway game into the world of tabletop warfare. The intellectual property of Star Wars is pretty strong among people of all ages, and has become mainstream to a point that most people have a the very least a little knowledge of the universe. Among all of the other games that attempt to bridge that gap between miniature wargames and board games, it has one of the lowest price points to jump in. That makes it easier for folks to jump in to the game. Another item in favor of the game is that miniatures all come pre painted and pre assembled, and they actually look quite good! Most pre painted miniatures tend to be pretty mediocre at best, but the ones for X-Wing are really well done and good quality. So for people that may not want to get in to the construction and painting aspect of the hobby, these are a fantastic to jump in with. All you have to do is open the packaging and they're ready to go. The games themselves can also be incredibly quick, and it has a very easy learning curve which makes it a popular choice for new gamers. I've used this game to get people who have had zero interest in anything tabletop wargaming related to relent, and many of them have started looking at other miniature games as a result of how much they love this game.

So, those are my current go to games when it comes time to try to infect the masses with my love of miniature gaming. They are fun games, relatively quick, and showcase some of the cooler points of being a miniature wargamer. Now, they are far from the only games that I could use to introduce someone to the hobby, but I use them quite regularly. So now I want to ask you folks, what games do you use to introduce people to our hobby?