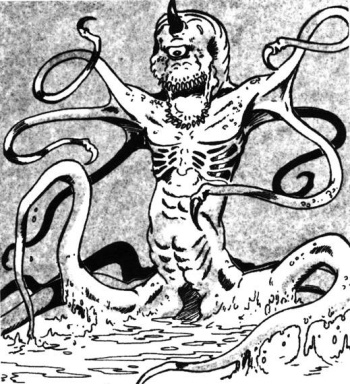 When the players finally confront the villain, the stakes have to be at their highest. Should the heroes fail, the consequences must be dire. The fate of a city, a kingdom, or even the world should hang in the balance, and the players must know that it all hinges on the outcome of this battle. If your campaign is of a smaller scope, the stakes can still be high -- perhaps the player framed for murder will be hanged if the real murderer isn't captured in time for the trial.

You don't want your final showdown to turn into a static slugfest in which the combatants just stand in place and take turns hitting each other. Add stimuli that will encourage your players to do something different every couple of rounds. Maybe minions show up periodically. Maybe the battlefield is sinking in lava and characters have to climb to higher ground. Maybe the villain transforms into a flying demon once he is reduced to half of his hit points. Every battle is a story in its own right, complete with a beginning, middle, and end.

If they defeat your villain, grant your players satisfaction. After all the anticipation, they deserve to revel in their triumph. Make their victory cinematic; make the villain's death spectacular. Have his evil artifact explode in a torrent of glowing crystal shards. Let him slowly and agonizingly dissolve into a puddle of black goo. Make his empire crumble before the players' eyes. Maybe you don't want this to be a triumphant ending -- maybe you want your players to have accidentally fulfilled the villain's plan. That's fine; but reveal it later. For now, let your players eat their cake.

Now that you've got your basics down, check out this article on how to play your enemies over the course of a game.