Designed by Chris and Suzanne Zinsli. Published by Van Ryder Games. Released in 2014. For 2 Players ages 8+. Plays in 15 minutes. 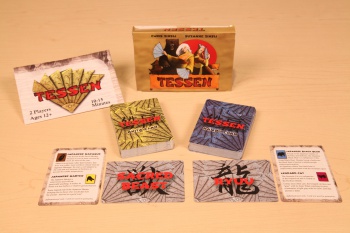 The emperor has decreed: There will be no more wars among the noble families. Instead, competitions among clans shall be decided by hunting down sacred beasts. To keep violence during the hunts to a minimum, the only weapon allowed shall be a hand of playing cards... err... a bladed war fan. Tessen is a speedy real-time card game where players collect and score sets of animals, all while attacking the other player to steal cards and defending their own sets. Interestingly, it's not necessarily just a game about speed - you have to think fast, too. Though in the end the fastest player often wins, there are craft strategies to work around that.

As you play, you draw cards to your hand limit of five and put them into as many as five sets of like animals in front of you as fast as you can. You can draw from both your deck and your opponent's discard, so you have to be careful about what you're discarding in order to build a good set fast - your opponent might need it. At the same time, you can draw and play your Warrior cards to attack opponents. The warriors both steal an opponent's set and occupy one of their slots, or your opponent can play a warrior in kind to defend against your play. Once one of your sets gets big enough, you save it to one side and place it in your score pile.

It's a fairly simple ruleset that can be learned and played in minutes, which is a huge strength for a game that's supposed to be fast on its own. The cards themselves are quality enough stock to stand up to some abuse, but you'll probably want for sleeves before too long. The game includes two "mini-expansions" that should really be treated more like an advanced game, giving you valuable things to do with spare animals and warriors, but which are too complicated for the initial few plays of the game. It's a huge value-added, even though the two expansions are physically just a single card each. 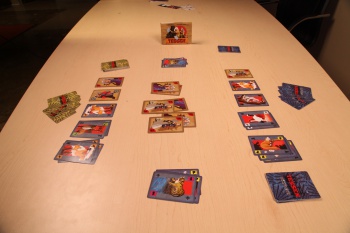 The best thing about Tessen isn't any of that, though. It's the table dynamic it creates. Too many simultaneous, real time play games feel like they're either two games of solitaire with brief moments of player interaction, or an all-out slap fight where the first person whose hands hits the table wins. Not so with Tessen. What your opponent is doing interacts with what you're doing neatly - their discarded cards become your opportunities, which become targets for their potential theft. Sure, speed is of the essence and when two players are evenly matched speed is going to be the deciding factor, but that's simply a reality of real-time games. What's more important is knowing how your mind - or your opponent's mind - works. If you can game out what your opponent's strategy is you'll be able to overcome their speed. If your opponent is being free with their warriors, save yours up for a blitz attack. If your opponent is blitzing your lines, throw out bad matches for them to steal and then counterattack later. On the other hand, if your opponent is just faster and smarter than you? Well, like any other sport of speed, you're just going to lose. There's not too much you can do about that other than hope for lucky draws.

There's depth here for both casual and intense gamers, who will appreciate the way that the game makes you twist in the wind as you go. Tessen will serve many groups well as a great filler game or take-anywhere quick thrill, and at a quite reasonable price for such a replayable game. However, binge-playing the game can really be a drag - so don't expect it to carry a whole evening of play.

Recommendation: If you're looking for a short, high energy game to kick off the evening or fill time, Tessen should definitely go on your to-buy list.