All the fun of an empire building game in eight minutes. Sound like a completely unrealistic challenge? It's not. Eight Minute Empire: Legends was a fast sequel, released quick after the original Eight Minute Empire and decidedly better than the first, which was already one of our best board games of 2013. Legends iterates on the first game by shifting how a few things work, but the limited distribution of the first game means that this is probably going to be most peoples' first experience with it - and that, I must say, is not a problem at all. Otherwise, it keeps all the good parts, from quality components to pretty art, from the original. Legends' focus on speed and light mechanics really brings the epic feel of bigger games to a small game, fast play format. It's the same kind of fun you get from modern wargames, just... faster. Combined with the set-collection way that you deal with movement and troops, this game sits somewhere between small-box and micro in a great way.

Each turn, you choose one from a set of cards. For cards that have entered the lineup more recently, you have to pay coins from your bank. Each card gives you a certain set of moves, you might move four armies and build a citadel, or gain two troops and a coin, for example. As you collect action cards from the row, they build a set that gives bonuses to future cards and abilities - like immunity to attack or additional movement. In normal empire-building terms, the cards serve as both your action choices and your research, simultaneously deciding what you're doing now and making your future actions more effective. At the end of the game, you score based on how many regions and islands you control, with a bonus set of points for collecting certain card types in sets. 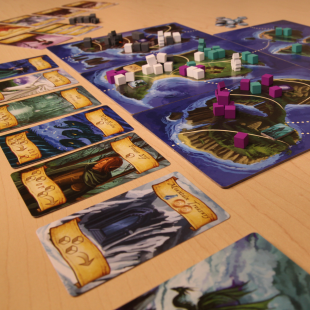 The board itself is built by the players, who combine rectangular tiles to form a world to fight over. The placement and types of tiles vary, with a few having special rules regarding - like a desert so big it must form the center of the world. The random setup is actually one of the more interesting aspects of the game, but you can build yourself into a corner with a bad map and end up with an uninteresting game.

That richness of action economy, where past choices build on future ones, serves to build one of the quickest, most fun area control games I've ever played. The icing on the cake is that the game sidelines in an interesting set collection mechanic, whereby you spend money for variety of choice now, but sacrifice it later. The combination of the two builds a very rich play environment, but you end up doing many of the same small actions each time.

And then you add the second, optional layer of the game: Leaders and terrain. With leaders, each player gains certain bonus abilities and conditions for bonus points. With terrain, certain territories can have treasure hordes, dragons, and portals across the world. These small variations between games really twist the somewhat static feel of the game. They add real objectives other than simple expansion, and force different players to strategically choose where to fight each other, rather than trying to simply run roughshod over everyone else on the board wherever possible. However, if you distribute the pieces poorly, you can often find the same problem as if you set up a bad map.

Oh, and, does it take eight minutes to play? If you're fast, probably. Everybody else, budget twenty.

Recommendation: If it fills a niche in your collection, strongly consider it. If you're a microgame fan, a must buy.