Designed by Daniel Solis. Published by Smart Play Games. Released in 2014. For 2-4 Players Ages 10+. Plays in 20 minutes. Available through DriveThruCards

Penny Farthing Catapult is a quick, fun pub game with a light theme and dynamic elements of set collection. While it's not the deepest game you'll play, it has a lot of merit as a pub game for light play between friends, or a filler game that slides in between longer games at your game night. It has an interesting twist on mechanics, and an odd play setup and presentation, that are unconventional and new compared to similar games. However, it has some odd moments during play that detract from the experience. 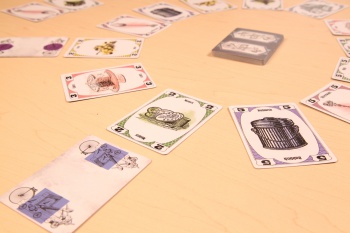 In Penny Farthing Catapult's silly world, players are dueling nobles launching objects of wealth at each other off of their bicycle-powered catapults. As you play, you move around a track of cards on the board. You have a set of cards in your hand to launch and a set of cards that you've collected by hitting them with launched cards. When a noble launches something, it travels a distance equal to its value, and the noble is knocked back just as far around the track. They then collect the wealth that they targeted with their shot. If they hit their enemies, that other noble loses something for their collection. At the end of the game, your collection of wealth scores points based on the lowest value item of each suit you've collected. As you go, you'll find yourself collecting high value cards to score points, but low value cards to discard in case the other players attack you.

It's a very simple game that, though unfamiliar in mechanics, can be learned in five or so minutes. That simplicity certainly reinforces the idea that this is a simple and quick game. The atmosphere of play the game inspires is lighthearted and jovial. It's definitely a game you can have a few drinks, sit, and converse over while still feeling like you're engaged in an activity, and one with a strategic end goal at that. The problem, though, is that the game's ease of play comes at the expense of depth. You've rarely got more than a few options at any given time - and they're often obvious. Choosing which card you can hit It's a blessing for quick play, but those looking for a deep, mathematically collecting sets of cards will be disappointed. Further, the game isn't precisely as intuitive as it could be. The experience of having two sets of cards - your hand and your collection - to manage can be weird or frustrating at times. The slick moments of building a set are very satisfying, but sometimes you simply get stranded at an odd part of the board and have to take a few turns doing things that don't really contribute to your score or knock an opponent down a peg.

I don't think the game would hold out over years of repeated play, but it's definitely worth taking out for a few runs at its price point. It's an average game, though: If you only add the best to your collection, give this one a skip. If you're a tabletop bon vivant in search of new experiences, though, give Penny Farthing Catapult a whirl - I think you'll like what you find.

Bottom Line: For less than the price of a movie ticket, it's hard to say no to a new, fun card game.