Designed by Jay Little. Published by Fantasy Flight Games. Released in 2012. For 2+ Players. Plays in 60 minutes.

Capitalizing on the solid appeal of Star Wars and iterating on the excellent Wings of War flight path system, the X-Wing Miniatures Game is a tactical spaceship combat game focused on dogfights between the small fighter craft of the Star Wars universe. Fantasy Flight Games has had a solid hit on its hands with X-Wing, delivering the best selling game in the company's history. Expanding over time with waves of new ships, the game has proved exceedingly fun in both organized tournament and casual home play. With solid rules, fast play, and expandable customization, this is one of the best miniatures games on the market right now.

Each round of the game is divided into four phases: Planning, Activation, Combat, and End. In the planning phase, you use a dial of available ship maneuvers to secretly select how each of your ships will move. Then, in the activation phase, players move their ships in an order determined by their pilot abilities, playing out the moves previously chosen along small cardboard templates. After that, combat ensues, where ships that have gotten each other into their sights get to shoot at each other, which is played out with an easy dice-based system. Finally, you clean excess tokens off the board. Board, of course, being a very loose term here - there's nothing like a playmat required, you just fly ships on any flat surface available. 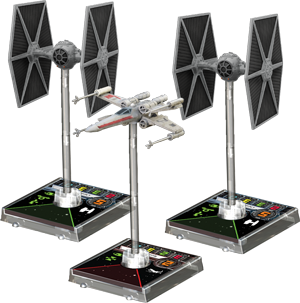 If the game sounds simple that's because it is. Unlike some more complicated miniatures games that rely on grid movement or finicky measuring, the fast and loose template based movement and fire at play in X-Wing ensures that you can stop worrying about ruler measurements and counting squares and instead get to the interesting parts of planning and rolling dice quickly. You spend less time establishing parameters that allow you to play the game and more time actually playing it.

That's not to say that the game is without complexity - or that there's no skill involved. Each type of ship has certain actions it can take each turn, and often using a different pilot for that ship adds an action to its repertoire. Those actions are things like evading, locking on target, and barrel rolling - simple to execute, but the choice often depends on your own playstyle or weighing odds of an enemy attack hitting you or not. Further, there's a deep skill in understanding the movement limits of your own ships. Each ship has a different dial of movement options - so nimble TIE Fighters are faster than powerful X-Wings. For example, a TIE Fighter can execute a 180 degree turn much quicker than an X-Wing, which takes more space to do the same. Mastering how you use the premeasured distances your ships can move is a huge factor of competitive play in this game, and the sheer skill of staying in formation and outguessing your opponent during dogfights is thrilling to master.

Once you've mastered the base game, which will come quickly, you'll start building your own squads by customizing who's flying what ship and what ordnance they're carrying, along with further things like powers, droids, and special talents. Each expansion pack released for the game includes more powers, more pilots, and more ships, allowing for what's now a thriving metagame of strategies and counter-strategies, builds and counter-builds. The game is consistently expanding through more "waves" of ships - not one of which has managed to unbalance the entire game. To date, you'll not have to worry about a friend buying the shiny newest ship and ruining your play experience. Recently, Fantasy Flight has started adding larger ships, though they're smartly relegated to special tournament formats and casual play. 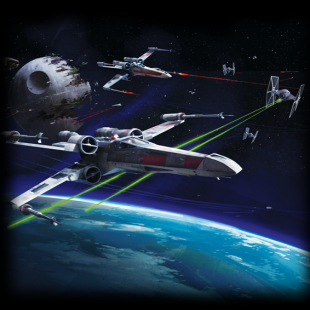 The quality of the miniatures and components is typical of a Fantasy Flight game - quite high, with good details and lasting, good stock on cardboard components. The ships in particular are some of the highest quality prepainted miniatures available for any game on the market right now. They're a worthy addition to a Star Wars fan's collection.

That quality, however, comes along with the game's single downside: Price. It is not cheap. It is neither cheap to get into, cheap to collect, nor cheap to assemble a good, playable set of. At $40 for the core set of three ships and the templates, you're getting the basics for two people to learn the game's rules and the components to play with. You're not getting anything like enough ships to play a full size battle - and you'll end up paying $15 a ship from there on out. Now, individual ships do come with a variety of pilots and cards like droids or weapons, but the price is still quite high. While this game isn't nearly as expensive as a game like Warhammer, nor does it have the collectible must-buy-more urge of Heroclix, it's still definitely a hobby game with a reasonable expected investment to play. You'll end up paying above a hundred dollars to field a sizable force against your friends - but you could be quite happy with that and never spend more. As with any miniatures game, you've got to balance out what you're willing to pay against how much fun you're looking to get out of the game.

Because one box simply is not enough. This is just not a complete game out of the core box. You'll never have enough fancy minis. Never.

Bottom Line: X-Wing Miniatures is a fast, fun tactical experience that ranks among the best miniatures games ever brought to the table.
Recommendation: If anything about X-Wing looks fun to you then try it out - but be wary of the investment required.

Image Credit: The Metal Bikini, a great blog about X-Wing.