I remember sitting there after my first game of Galactic Strike Force, staring at the board, forecasting back turn after turn to see what might have gone differently, what I could have done to prevent our inevitable demise. It was, as far as I can see, a mistake we had made on the second turn, hours before. "This," I muttered to everyone playing with me, "is a very hard game." I said that not because I had been outmaneuvered by another player, or to cover up my own poor choices, but because GSF is a cooperative game. A cooperative game that will, near every time you sit down to play it, take you completely apart. 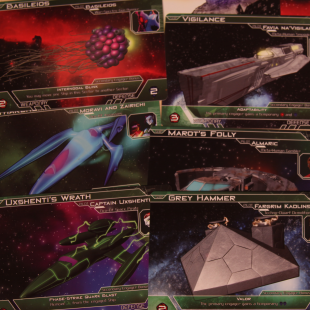 Galactic Strike Force is a cooperative strategy and tactics game with elements of deckbuilding. In the game, you're a rag-tag group of spaceship pilots, each with their own deck of cards, who have grouped up to save the free galaxy from some great threat. There are four of those in the set: a machine intelligence, a race of energy beings, a crime syndicate, or an invading empire, for example. Over the course of the game, the pilots move between different systems fighting the enemy threat and completing missions, eventually taking on and destroying the enemy's flagship to win the game. As they travel, pilots can buy new equipment to add to their ship deck and equip it to their ship. The enemy, meanwhile, deploys ever-more ships and threats to defeat the pilots. All of this is nicely produced in a quirky space-fantasy setting, with quality art and components that should stand up to wear and tear.

There's a lot of variety at the core of this game, with a dozen pilots and their individual decks available to play. Likewise, the huge pile of cards that make up the variety of equipment in the stations you visit means you'll rarely have a similar deck experience. The individual pilot decks are a little thin, though, and the majority of cards you handle will come from the station decks. Those station decks, then, should be the crux of interesting play in the game. Sadly, unlike other games where you're building up an interesting suite of cards, you actually have very little control of what goes into your deck due to limited selections at any given time. Indeed, because of the way you create the weapon pool, you won't see a fraction of what's availalble in one game. While that's normally good, if uninspired, replay value here it becomes frustrating as your available pool might simply lack a good amount of armor modules for you ship - leaving every player out of luck for defense. 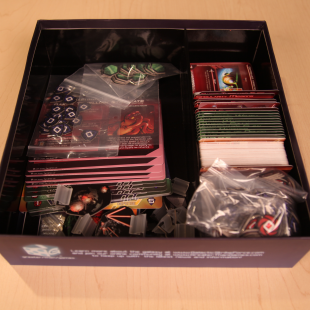 Gameplay is divided into phases, Travel, Purchasing, Combat, etc. There are more than a few of them. Each phase, you check the board for effects that take place at the top of the phase - and unless you've got a razor mind, you'll be checking every card. That can easily be, say, 20+ cards in the mid game. You then resolve those abilities. Then you get to do a small action, like move, buy, or equip new ship parts. then you move to the next phase, where you do it again. In a good game it moves quickly, but for much of play it feels like you're doing a lot of bookkeeping and board upkeep before you actually get to play the game. Sure, playing the enemies is playing the game, but it's so uninteresting to manipulate ships in the same ways over and over, remove tech from your ship, and push cardboard energy chips from ship to ship that you really just feel like you're doing bookkeeping. Do your taxes, then have a moment of fun play.

That said, when you're really getting down to this game it's very fun. You have to develop a strong strategy to protect your team from getting totally screwed by random events, and you have to consider all your vulnerabilities at any time. When this game is fun, it's really fun. If building up your ship, getting stronger and stronger after being slapped down repeatedly, before desperately assaulting the enemy capital ship for a victory sounds fun, well, it is.

Though it can feel more like Galactic Strike Force has substituted gut-punching randomness and deadly random events for a satisfying core mechanism, it does do very well when facilitated by someone who has played it a lot, or with a group that has played many times. People with committed groups of hardcore gamers who love theme over deep mechanics, or who don't mind pulling the weight of the game for their friends, would do well with this one. GSF really smacks of games like Arkham Horror, which produce some very memorable gaming despite being a kludge of disparate mechanics and numbers.

Did I mention this game is hard? It is hard. It is hard, though, in the best way. The way you want to beat. If it sounds like your kind of game, you'll certainly get a lot of value from it before you're done.

Recommendation: Hardcore hobby gamers with a sideline in a co-op challenge will love Galactic Strike Force.