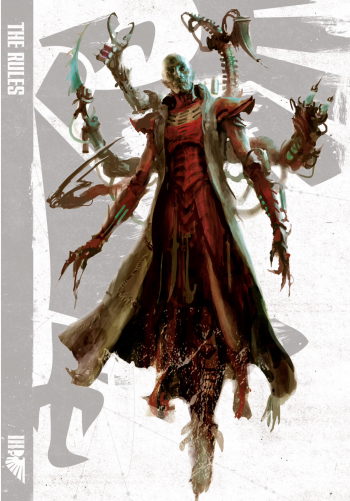 The main section of rules stays the same for the most part, and a turn is broken down into its component pieces just like previous editions. Movement, shooting, and assault phases are all present and accounted for. There is the new addition of the psychic phase, now back as a separate phase all of its own. The last time the pyshic phase was presented close to how we see it here was 2nd Edition in the mid and late 1990's. Players now generate warp charges which they must spend during the psychic phase to manifest their powers. To generate warp points, the player whose turn it is rolls a D6 and both players receive that number of charges. Each player then adds the mastery level of all their psyker units and add that many to the pool of dice. This gives you the total of available Warp Charges for this turn. Once that is done, the player whose turn it is can begin to attempt to manifest psychic powers. Only the player whose turn it is gets to attempt to manifest powers.

In previous versions, you needed to pass a leadership test in order to successfully cast a power. In the new edition, however, you have to harness the Warp Charge into Warp Points, which is done by allocating a number of points and rolling that many dice. For each dice that is a 4+, you get a warp charge. Then you spend those points on the power you are trying to manifest. If the psychic test was passed, an enemy target gets a chance to expend a Warp Charge to attempt to deny the witch. If the psychic power does not target an enemy unit, the opponent can still attempt to deny the witch, but does not get any bonuses from blessings or gear. This is an important change, as it balances the psychic phase so that you have to pick and choose what powers to manifest or when and what to counter. It also allows players a chance to stop buff spells such as Iron Arm without having to have a special counter power. Denying the witch has also changed, so that if you attempt to do so, you must pass the same psychic test, but you must have an equal number of successes to the number of successes the casting psyker generated.

The perils of the warp have also been reworked to be something players should truly fear. If a player rolls two 6's on their warp charge dice, they suffer a peril of the warp and must immediately roll on the perils table. Effects range from completely removing the psyker from the table upon failing a leadership test and dealing wounds to any units linked to the psyker, to forgetting a psychic power, to even becoming super charged. It will make you think very carefully on how many dice to spend when generating charges. 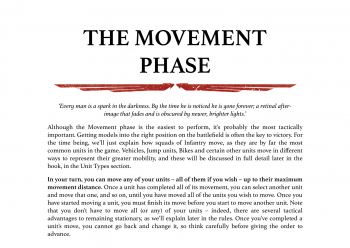 Psychic powers have also changed quite a bit. All powers now have a cost associated with them, and in several cases have been reworked to remove variables or to streamline the functionality of spells. An example would be Iron Arm, which instead of giving a variable to strength of D3, gives a flat bonus of 3 when successfully cast. Psychic focus allows a psyker who has chosen all of their powers from a single discipline access to the Primaris power in addition to the powers they have generated. If a level 3 psyker chooses all Telepathy powers, for example, they would gain access to Psychic Shriek giving them four powers instead of the normal three. It is powerful incentive for players to focus on a single discipline. There are two additional disciplines that have been added which revolve around demonology. Sanctic powers are primarily used by the Grey Knight faction, and revolve around buffing units and purging demonic forces. Malefic powers are those used by Demons, and revolve around possession and summoning more demons into the battle. Any psyker can take these powers, however only Grey Knights and Demons can use them without penalty. Normal psykers will suffer a perils of the warp if they roll any doubles when activating the powers, not just the normal double 6's

This crafts the Psychic Phase into something that is much more tactical for both players. You have to plan your expenditures accordingly, as well as your counters. It makes it a far more engaging and interesting phase than previous editions, and really fleshes it out to rival the psychic phase from the old days. These are very good changes to how psychic powers work, and will lead to more involved battles when determining which powers to use and which to counter. It also allows psychic powers to come into their own, where in 6th Edition psychic powers were mostly underwhelming.