In Smash Up players take decks of cards representing two ridiculous groups - like Pirates and Cyborg Apes - and shuffle them together. Then they take turns with their decks competing for world domination. It's a goofy theme with fun art and high replayability, but beneath that veneer of casual play is a great middle weight card game that lives on the line between hardcore gamer and casual enjoyment. That's a line that many games claim to straddle, but few do it as well as Smash Up 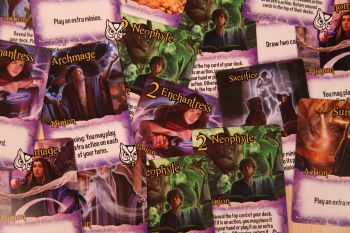 Each turn in Smash Up you can play a single minion and a single action in any order. After that, you check to see if there is enough power worth of minions on each base - the game's locations - to make that base score. If the base scores, all those minions go to the discard and the player with the most power on that base scores the base's highest value. Then you draw two cards. Then your turn is over. If someone has more than 15 points, they win. You can teach it in about ten minutes. Smash Up is a superbly simple game.

Of course, Smash Up is a game about exceptions to the rules. Your pirates are special minions that get to move around a lot. Your opponent's faction sometimes plays when it's not their turn. Your wizards let you play lots more actions than you should get to. Smash Up is a rather complicated game.

It's that both of those statements - this game is complicated, this game is simple - are true which makes Smash Up such a genuinely entertaining experience. There's flavor here, and the flavor and theme are important to enjoyment. It's fun watching your Leprechauns kick a T-Rex's ass out of an alien moon base. It's also fun lining up a perfect play, pushing your minions into just the right bases and employing an ability so that somewhere your enemies thought was in the bag becomes your score instead. 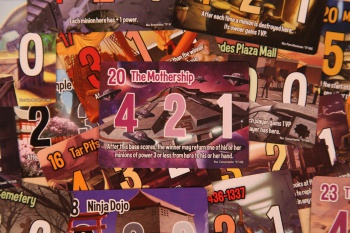 The theme and art style of the game make it look like a light romp, like Munchkin perhaps, but it's when you really start to play that you see it's straddling both the worlds of casual and competitive game. You can certainly, like any card game, get cheated out of victory by a series of poor draws - making it feel like a game about randomized draws and doing the best with what you have. On the other hand, knowing your deck composition and building a strong combination gives you the kind of power over your opponents that you might have playing your favorite Magic: The Gathering deck. On top of that it plays in about 45 minutes - giving you time to strategize and learn your odd combination. You end up putting a lot of deep thought into what you're doing.

That investment in the game as it plays is actively undermined by not just the randomized elements, but by the sometimes odd balance between the game's various factions. Every faction has their basic schtick - Ninjas, for example, often get to play into the battlefield when least expected. Some factions have a schtick that's just better than others. Zombies and Wizards, for example, are powerhouses who achieve constant advantage by having more card plays in the case of Wizards, and free creature plays in the case of Zombies. Dinosaurs, on the other hand, are a bit weak compared to the others - their Minions have consistently higher power, but they rarely get extra card plays, so while they can pull out some surprising victories they're rarely able to pull ahead. The unbalanced element among the various factions is what holds Smash Up back from true greatness. That's not to say they're strictly unbalanced, but sometimes you'll see a combination emerge that simply steamrolls the competition - or someone will have a bad game because it turns out that with a few bad draws Dinosaur-Pirates just suck. 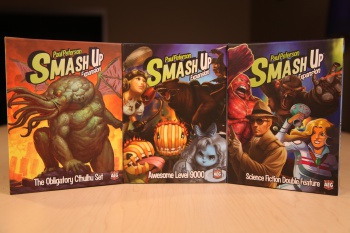 Is that a reason to avoid the game entirely? Not at all. It's just part of what Smash Up tries to do in the process of appealing to both casual and competitive players. This is certainly the game for nearly any group - acting as entertaining filler for hardcore gamers, a great core game for casual groups, or a perfect game for mixed groups of core and relaxed gamers.

So let's talk about the expansions real quick - we'll run down the ones released so far and what they add to the game. First off, if this is a game you enjoy after playing the core set you'll definitely profit from adding more variety to the game with expansions. That said, some of the expansions are better than others.

Awesome Level 9000 is the strongest set, with Killer Plants, Ghosts, Bear Cavalry, and Steampunks - this is the expansion that shines. Each of the new factions really interacts with the mechanics, and the various bases all have really great effects on their own. Killer Plants, for example, get stronger as they're left alone. Steampunks cobble together a variety of effects and modify bases as you go. The Obligatory Cthulhu Set is perhaps the weakest, with a deck-clogging "Madness Card" mechanic that while sometimes entertaining feels unwelcome more often than not. It does have some of the more inventive or strange factions - like the Elder Things, who give your opponent lots of tough choices to make - but isn't the one to buy if you're only getting a single expansion. Science Fiction Double Feature is the one I could take or leave, featuring Time Travellers, Shapeshifters, Spies, and Cyborg Apes. There's a lot of variety to be had, but none of the factions feel as interestingly focused as those in Awesome Level 9000. The bases are quite a treat, though, and do some odd things that players enjoy every time they show up.

Bottom Line: Smash Up is a genuine treat - a game that looks silly and turns out to be a well designed, rollicking ride.
Recommendation: Somewhere between Munchkin and Magic: The Gathering, lies Smash Up, which makes it worth checking out.