The Ascension deck-building game has become incredibly robust since its initial launch in 2010. With several expansions available, Ascension has countless ways for players to combine cards and sets together to create a multitude of different ways to play the game. Realms Unraveled is the latest stand-alone set in this deck-building game, but for better or worse, doesn't do much to change how Ascension is played on its own. When mixed with another Ascension set, however, it fares better by increasing the options and strategies available. 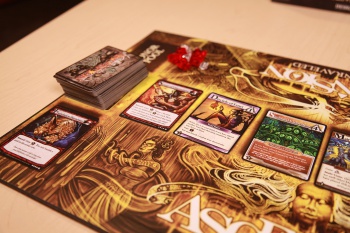 If this is your first time hearing about Ascension, here's a summary of how this deck-building game works: In the fantasy realm of Vigil, players compete to have the most points (called honor) at the end of a match. Each player has their own personal deck, and through playing cards that provide the game's resources, runes and power, can acquire additional cards or defeat honor-gifting monsters that are drawn from a randomized deck and placed in a center row. The strategy of Ascension comes from choosing which cards to pick up, taking the form of Heroes you play once a turn or Constructs that stay permanently in play on your side. Each of these cards all have varying abilities that can provide more runes or power, or have other special abilities such as allowing you to remove weaker cards from your deck or draw extra cards during your turn. The cards are split into four colored factions representing the realms of Vigil; with each color usually representing a particular play style - the blue Enlightened cards, for example, are mostly focused on drawing extra cards, while the purple Void cards provide monster-slaying power.

Realms Unraveled is playable out of the box and comes with everything you need to run a game with 2 to 4 players, although it can be combined with other Ascension sets to increase that number up to 6. Much like previous sets, Realms Unraveled comes with its own set of special abilities that affect the way a player's cards can interact with each other. Cards with Multi-Unite (a more beneficial version of the Unite ability introduced in Storm of Souls) allows you to trigger an ability that grants extra runes, power or honor for every specific type of a card you play or have played during your turn. Realms also has multi-faction Heroes, which can trigger multiple faction-specific events such as Multi-Unite. These two particular gameplay features can let you deploy some highly rewarding combos during a game that'll allow you to defeat tough monsters or acquire high-cost cards, but not in any way that feels drastically different or unique than what you can do in previous Ascension sets. 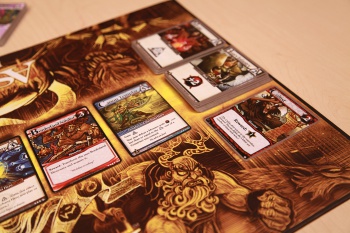 What really helps Realms Unraveled stand apart from other Ascension sets is its new uses of the "transform" ability. Certain cards feature conditions (such as playing a specific card type or earning a certain number of honor during a turn) that, when met, allow you to trade them in for an improved version of that card from a separate deck kept off to the side. The concept of transforming cards provides you with an interesting strategy, since it gives you the option to pick up cards that are initially weak or provide no gameplay benefit in the hopes of gaining stronger cards later on. The card Forgotten Scripture, for example, is a construct that doesn't do anything at all when first played, but once transformed, allows you to draw an extra card every turn. A few of the transform cards are a little underwhelming - I wasn't impressed with Borderlands Mercenary since it does little more than exchange itself for a new card and help trigger multi-unite combos - but there's something about exchanging a weak do-nothing card for something more powerful that can be very satisfying, especially if it helps you gain an unexpected edge over your opponents.

While the flow and pacing of each Realms Unraveled game relies on what cards are drawn and appear in the center row, there are a few problematic balance issues that can crop up. For one, there's an utter lack of any cards that force players to destroy or discard constructs, which has a tendency to make cards from the Mechana faction (which specializes in constructs) absurdly powerful. If you're playing against someone who manages to pick them up, they can easily out-acquire or out-defeat other players with little chance for a comeback. Plus, unlike previous sets, there are no cards or mechanics that foster interaction between players through forcing them to discard part of their hand or stealing honor. This can lead to some matches that can feel a little like a complex game of Solitaire, as your only choices in affecting how other players build their decks or earn honor is limited to buying or defeating cards you think they may be after.

When combined with another set, Realms adds a good layer of complexity that can make games more entertaining with the amount of odd interactions or combos generated by its dual-faction heroes or transform cards. Players who enjoy planning ahead will find fun strategies in banking a collection of Trophy cards from the Storm of Souls expansion with Transform cards for late game combos, and including construct-eating monsters like Sea Tyrant or Corrosive Widow from the original Ascension game can help provide an option to players who are up against those who invest solely in Realms' constructs. As with all the other Ascension sets, the more cards you add can dilute the pool of cards that appear the center row, but overall, mixing in a separate set or at least cards that re-introduce mechanics like construct removal or discards can help make Realms feel like a more even-handed game where there are more options for players to win or come back from a bad start.

Bottom Line: Realms Unraveled introduces a few neat concepts into Ascension's already robust deck-building universe, but on its own isn't much more than an average intro to the game system.

Recommendation: Ascension veterans eager for even more variety in their games will want to pick up this set for the new long-term strategies found in its "Transform" cards, but newcomers should go with one of the earlier expansions first.

Editor's Note: We also spoke about Ascension: Realms Unraveled on a recent episode of our tabletop podcast.