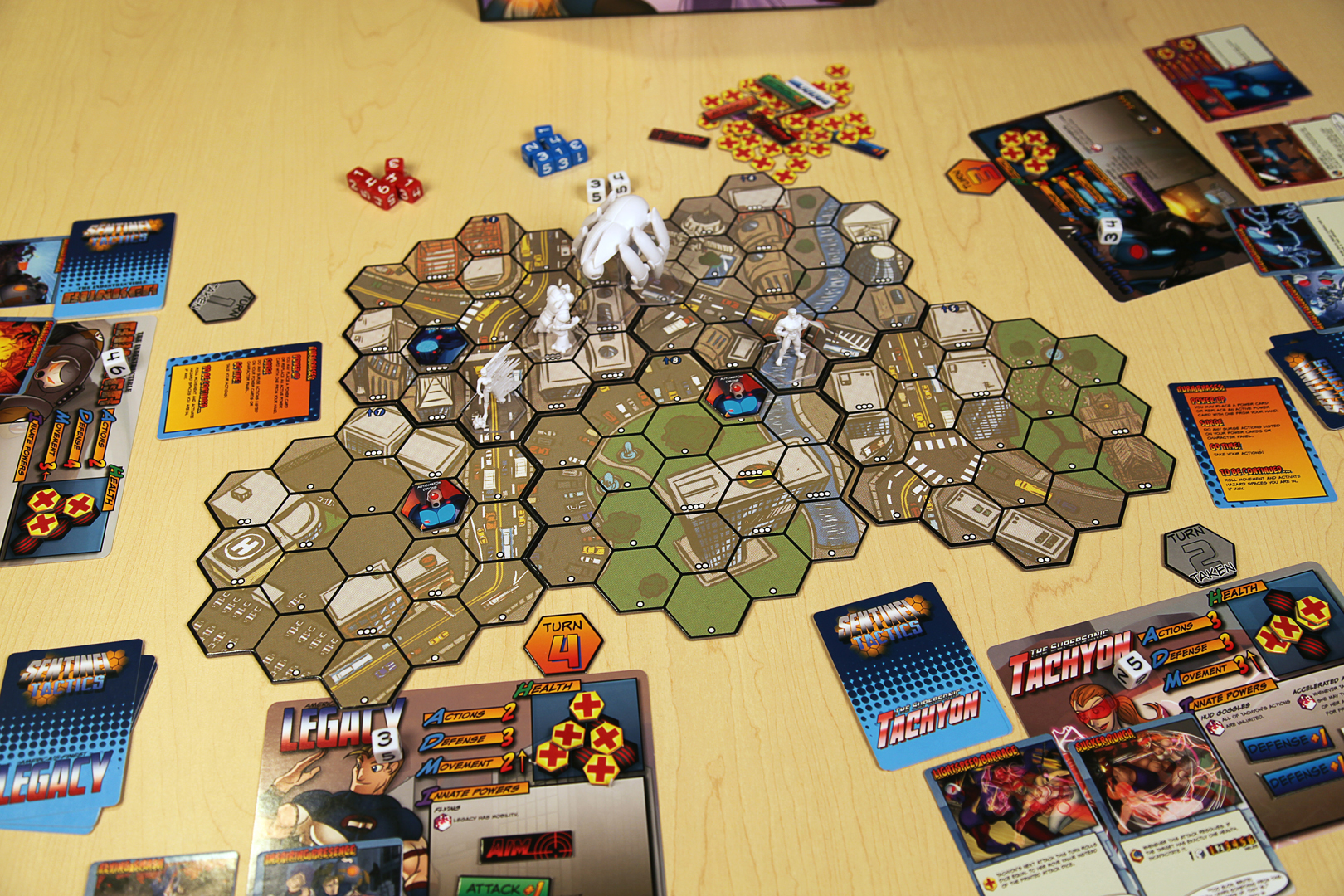 Sentinels of the Multiverse is one of my all-time favorite cooperative games. So you can imagine that I was excited - and skeptical - to hear that Greater Than Games was releasing a Multiverse spin off titled Sentinels Tactics: The Flame of Freedom, which trades in the cooperative focus and large decks for a competitive hex-based minis game with a focus on character versus character combat. After several playthroughs, it's lacking some of variety due to having fewer characters and environments than its progenitor, but it does have some entertaining, fast-paced gameplay and a great deal of potential for customization.

The base game of Tactics comes with ten characters (6 heroes, 4 villians), all but one of which are classic characters, as well as several tiled hex maps that represent Megalopolis, a crowded city, and Insula Primalis, a jungle island complete with optional rules for lava and rampaging dinosaurs. Each character comes with a panel card detailing biographical info on one side (because, well, comic books) and gameplay stats on the other, along with their own small set of cards that represent their passive and active abilities.

Gameplay is split into four phases that are thankfully easy to understand and quick to run through after just one or two playthroughs of the game. First is your Power Up phase, where you can swap out one of your characters' two active powers. Choosing the powers that best fit the situation becomes one of the core ways of how the game handles strategy.The fire-wielding Ra has many devastating attacks at his disposal, so you may want to swap out a power that affects a single opponent for one that can hit multiple targets at a time. Afterwards comes the Surge phase, where automatic effects granting you temporary attack or defenses bonuses in the form of tokens kick in, followed by the Action phase. The Action phase is the real meat of the game, as each character has a set number of actions per turn and it's also where you make most of your decisions on how to use your character and their abilities.

Character movement is randomly determined through the roll of the die each turn, though the game does allow you to instead sprint characters two hexes and ignore terrain. The randomness of movement may seem unnecessary - the high-speed heroine Tachyon, for example, definitely feels like she should always be moving more than everyone else - but in practice it adds a good amount of unpredictability, since you have to take into consideration that a poor roll may mean you'll have to put your character on the defensive in order to survive an impending attack. Other options include aiming or dodging, which grants you very powerful tokens that can make your attack or defense rolls equal to the highest die you've rolled. For the most part, though, you'll be using your character's own specific powers to attack enemy players. When you make an attack with your character, you simply use the number of dice listed on the ability and any that match the highlighted numbers on the chosen ability count as a hit. The game's way of figuring range to your target and how hard by an area of effect attack can be slightly complicated to figure out, and can hold a game up or result in errors even after you've picked up enough experience on the system.

The characters themselves are different enough that no two characters feel like exact copies of each other, but some don't feel like they have more than one role to play. The exo-suit wearing Bunker, for example, only appears to work best if you set him up somewhere as a stationary gun platform and pelt your opponents with grenades and missiles, and lacks powers that allow him to act as a front-line tank. The same can be said for The Wraith, a Batman-esque heroine, who only seems to work best as a sniper that attacks enemies from far away with her throwing knives. Those characters are disappointing when compared to some of the more varied characters, like the patriotic Legacy and the superhero supremacist Citizen Dawn. Both can act as either a support character that provides bonuses to allies or a more aggressive character that can get right into the thick of things with a few nasty attacks.