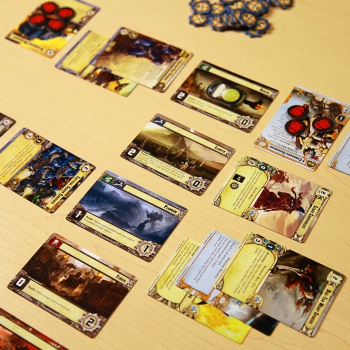 In the grim darkness of the far future, there is only card-based war.

At this point, Warhammer 40k is approaching being better known for all the other games and media that gets produced from the setting than the actual miniatures game. Books, pen and paper RPGs, movies, video games, and plenty of spin-off tabletop and board games have been produced over the years. Hell, there has even been card games produced previously before Fantasy Flight Games partnered with Games Workshop in 2008 to continues all things role-playing, board, and card game related.

This time around, Fantasy Flight Games is throwing their Living Card Game format at the property. For those not familiar, Living Card Games, or LCG, is Fantasy Flight Game's name of their format for collectible card games. Eschewing the traditional model of random booster packs, LGC come in core sets and expansions that contain a fixed set of cards. No more hunting around for rare cards, you simply have all the cards you need to build with - as long as you're keeping up with the new releases. Basically, you'll always have the entire card pool available to you. So your deck building isn't inhibited by having a playset of some $50 card. LCGs are the great way to get into a CCG without breaking the bank, though there is a much smaller resell market if you're ever looking to get out.

Something that Warhammer 40,000: Conquest really nails is capturing the iconic Warhammer 40k universe, which is great to introduce someone who happens to be a fan of the setting. In almost no time you can have squads of Space Marines bringing the hammer of the Imperium down on berserking Orks, or the dastardly Dark Eldar scheming across from their equally tricky cousins the Eldar. Fantasy Flight Games does an excellent job of finding the central thread or theme to the races and working that into their mechanics. The Imperial Guard army puts a lot of emphasis on support structures and spawning lots of little guardsmen, whereas for example the Tau are centered on upgrading their units with attachments to build monstrously powerful mecha-styled units. With seven factions in the box, Space Marines, Tau, Eldar, Dark Eldar, Chaos, Orks, and Astra Miltarum (Imperial Guard), there's a lot of replayablity with just the core set.

Further augmenting each decks strategy is the warlord. The warlord is the commander and general of the deck who starts the game on the field, and not only are they powerful units in their own right they also bring various special abilities to the fray. The warlords serve a bunch of different purposes in game. They determine where your reserve forces are committed each turn, where you want battles to occur and also as a secondary win condition, if your warlord is killed you lose. Each warlord also brings a suite of cards with them. When deck building you're required to include these cards in the deck, and vice versa they can't be included in a deck that doesn't have that warlord. It limits construction a little, and higher level competitive play may likely hinge on what warlord is required to bring the least duds, but it's an interesting way to promote the 'build around' nature of many of the warlords abilities as well as introducing a few really powerful cards without them taking over every deck.

One aspect about warlords that I was disappointed to see FFG not explore, though it honestly makes sense for the core set, is that they determine what your starting hand and resources are. All of the initial warlords are the same, but there's a bunch of design space that can be delved into around balancing warlords that might, for instance, offer large starting hands, but fewer resources.

The game itself is simple to play and mostly intuitive once you grasp the basic interactions, but there's a lot of strategy and planning to consider just below the surface. Setup is pretty damn easy, and Conquest can be played pretty much anywhere there's a decent amount of flat surface. After selecting decks, players will shuffle up the 10 planet cards before dealing out seven of them. Five of the planets will be face up and two will start the game hidden facedown, and the last three are not used this time around. Each planet has a number of elements to it. The planets are worth a number of cards and resources when you're in control of it, there's also a battle ability that will occur once a battle has been won at the planet and finally and most importantly each planet has type symbols. The primary win condition in Conquest is to capture three planets that share a type.