The 90s Collectible Card Game craze saw the rise and fall of some pretty obscure games, and with rare exception only a select few survived more than a year. Doomtown, based on the late 90s weird western roleplaying game Deadlands, survived for a few years - and many have fond memories of it. Now comes Doomtown: Reloaded, a reissue of the original game by AEG in their expandable card game format, where expansions and sets include a full playable set of each card included - so there's no element of randomization to collecting and playing the decks you want.

At its heart, Doomtown is a game of positioning and control. Over the course of the game, players build a town and maneuver their gang of cowboys around that town in an attempt to establish control over it. Unlike games such as Magic: The Gathering, and more like Android: Netrunner, the positional element of Doomtown really twists how players think about and play the game. It's a harrowing experience that begs players to push their luck, attempt interesting plays, coming back to the game again and again. It scales remarkably well into three or four player multiplayer game experiences. Add to that the interesting battle mechanics involving poker hands, and the formula for a unique and fun game quickly emerges. Sadly, Doomtown's complexity and the steep learning curve before playing against another player becomes fun works against both new players wanting to pick it up and experienced players who want to get deeper into the game. 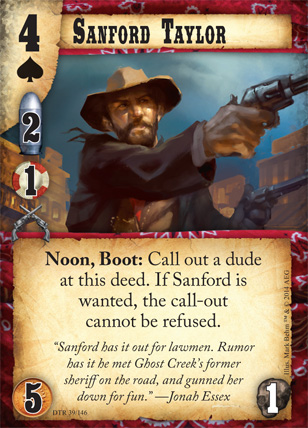 The world of Deadlands, which Doomtown in habits, is a weird western setting where cowboys and mad scientists exist alongside summoned demons, zombies, and magical coal called Ghost Rock that shrieks with the howls of the damned when burned. There are four factions in the core set of Doomtown, each representing a powerful group within Gomorra, the frontier boomtown where the game is set. The Law Dogs are the loyal and upright citizens, the sheriff, and his deputies, whose deck focuses on picking strategic battles and punishing opponents for cheating. The Sloane Gang are outlaws led by the the deadeye Sloane; Her gang of ruffians focus on outshooting and overwhelming their opponents. The Morgan Cattle Company are a crew of mad scientists who're richer than their opponents, surprising them with fast horses, steam-powered gatling pistols, and flamethrowers. Finally there's The Fourth Ring, a circus crew who dabble in evil magic and demon summoning, destroying their enemies with potent combinations of weird spells, unkillable undead, and clowns.

Every card has a few values - five or six in the case of the Dudes who represent your crew. The graphic design and layout is pretty good, though the plethora of values will often confuse new players. The art is lovingly painted or rendered, and there are very few pieces that are bad or utterly lacking in charm. Likewise, the tokens that represent game values like your available Ghost Rock supply and bonuses are made of a sturdy cardboard stock. The other key feature of every card is that it has a traditional playing card value in the upper corner, allowing any given draw from your deck to serve as a poker hand to resolve various events in the game - from shootouts to spellcasting. 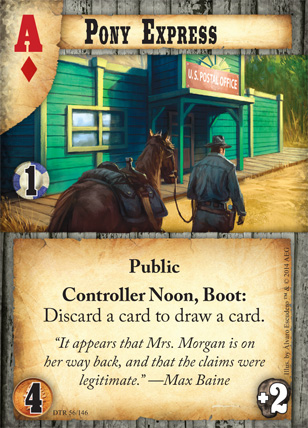 In any given round of Doomtown you'll ante up some Ghost Rock, then draw a hand of lowball poker, to establish which player goes first - and thereby gets the extra income - that round. Afterwards, the game goes into turns, where each player takes a single action with either their dudes already in town or by playing a new card from their hand, often Booting those dudes and making them ineligible for more actions. As players pay to place new locations - called Deeds - from their hands they gain control over those deeds, which usually have an income value for their controller and give a number of Control Points. Those deeds don't exclusively belong to that player, though, and if another player has dudes with a higher Influence value on the location they take control of it.

Players' dudes maneuver around the town using a system of movement rules, allowing them to move from their home base to the open town square and to their own player and other players' properties. Dudes can also kick off Shootouts with groups of other players' dudes, resolving them with poker hands depending on the number and kinds of dudes involved. The number of dudes knocked out in a shootout depends on the difference in hand rank between two players, and casualties have to be paid for by either putting a dude in your discard to cover a single casualty or Acing them into Boot Hill to cover two casualties. When a dude goes into boot hill, the player can't play any cards with that name for the rest of the game - the dude is well and truly dead. Players continue to take actions until everyone passes consecutively, then the game enters a Sundown phase where everyone draws more cards and goes into an upkeep phase for the next round.