Hoard of the Dragon Queen is the first adventure module for the new edition of Dungeons & Dragons, covering levels 1-8 for a party of adventurers and set in the Forgotten Realms' iconic sword coast region. It's also the first half of the Tyranny of Dragons adventure arc for the game, and will have a follow up volume in the form of The Rise of Tiamat. The adventure is good, certainly above average for recent adventure products of this production quality, but suffers from some slow parts and the clear indication that this was material developed while the game wasn't completely finished. Nonetheless, its reliance on tried-and-true fun roleplaying situations allows it to shine despite the otherwise weak or ill-explained segments.

Hoard of the Dragon Queen is organized as a classic tour-style adventure journey, hopping from location to location with a series of stops for further direction and for places to go. The major choices that players make over the course of the adventure don't deal with where to go, but instead how to approach the situations they find themselves in. There are a good number of players who won't notice this, but those who prefer a more sandbox style game, or a less directed plotline, will probably find that Hoard is not to their liking. Additionally, the adventure needs more than a little preparatory time for the dungeon master and can feel like a repetitive slog at times. The primary storyline, however, is engaging and interesting, with some truly memorable set piece encounters, and play scenarios that will stick with the players for years - it's just hard to remember that when they're slogging through odd mysteries and long stretches of game play that don't advance the story. It's a decent module, but many will consider it the only choice given that the Dungeon Master's Guide has now been delayed.

The book itself is printed on a very heavy stock of non-gloss paper, which is perfect for the kinds of dungeon masters who like to scrawl notes in the margins. The art throughout is lovely, though a very few maps don't precisely match up to the descriptions given - a minor quibble given the differences. Likewise, it's mostly laid out very usably and if you've read the module you can very easily find any part you're looking for. Very few rules are reproduced, so a copy of the full Player's Handbook or frequent references to the free basic rules will be needed. Likewise, the book only reprints monsters which aren't in the Monster Manual, but there's a free supplement online with full statistics for those not included. All of that is to say that true to Wizards of the Coast's guarantees, Hoard is fully usable with no other print D&D books so long as you have an internet connection. The adventure is balanced for four player characters, but would be easily tweaked for a larger or smaller group.

From here until near the end, this review will include heavy spoilers for the adventure module. If you'd like to play without knowing what's going to happen, skip to the end for some final thoughts. 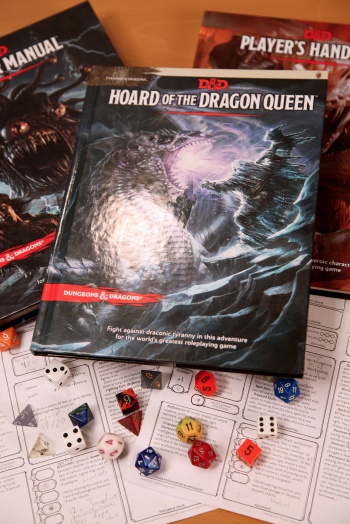 The adventure kicks off with a fantastic nighttime attack on a town by a dragon and a horde of bandits and cultists. The players are thrust into the midst of the sprawling combat, forced to try and save civilians and work with the town's few defenders against overwhelming odds. Afterwards, players are charged with infiltrating the cult's camp to rescue a friend, then once the cultists vacate they have to attack a fortified dragon hatchery and the few left behind to guard it. Afterwards, evidence of cult plans in hand, the players travel north to meet with allies and prepare their response. Once they've got their plans together, the adventurers then travel north in disguise alongside the cultists. When they arrive far north of Waterdeep they find the swampy castle where the cult is gathering their treasure hoard - and discover that the treasure is to be used in a ritual where Tiamat, Goddess of Evil Dragonkind will be summoned back into the world. After finding a way to fight or talk their way through the extremely well-guarded castle, the heroes find themselves teleported to a hunting lodge high in frosty peaks to the east. Once they find unlikely allies or clues there, the heroes must board a flying castle meant to transport the loot south, hijack it, and kill the dragon guarding the treasure.

Structurally, it's a solid premise and interesting, but in play and as written the middle sections really tend to lag and create dragging, boring play where dungeon masters have to narrate hours of travel and punctuate when something "interesting" happens. Even if your group are the types to go out of their way to familiarize themselves with the plethora of interesting NPCs that the adventure includes as part of their caravan north, only a bare handful of those NPCs actually matter outside their adventure segment, since the adventure immediately plunges your heroes into an enemy encampment afterwards.