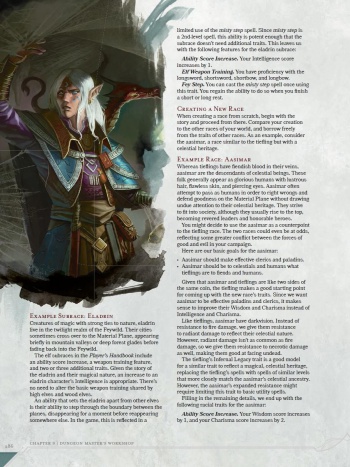 Creating Your Own D&D

The final chapter of the DMG is by far its most useful and interesting one, containing a laundry list of variants for the core game rules, rules for creating new monsters, and guidelines for creating new spells, magic items, and character options. There are variants for the ability scores and proficiency variants, which while strange to most players will prove invaluable to those who'd like a more streamlined game without skills. Options customizing things like healing, or adding combat choices like leaping onto a foe or knocking them down, help the game immensely by dialing in on the kinds of fantasies advertised in the earlier chapters of the book. This is where you'd find your rules to achieve high-flying wuxia action, or your gritty swords-and-sorcery world where losing a limb in combat is a real danger.

Creating a monster is the real star of this section, and players of Fourth Edition D&D will feel right at home. While as we saw in the Monster Manual monsters in Fifth Edition are more art than science, the math behind the monsters becomes abundantly clear. There's a chart for attack strength, damage, armor class, and hit points by challenge rating of monster. If you need a quick-and-dirty critter, this book can get you one in a handful of minutes - easily enough that once you know the rules you can make one up on the fly. There's also a more detailed creation process, letting you make monsters just like those in the Manual, complete with a cornucopia of special abilities and the monster to use as an example when crafting the rules for them. There's even a cozy bit for former Third Edition or Pathfinder players, with guidelines for adding class levels to monsters. (Oh, and if you need help finding them, there's an Appendix of monsters by environment and challenge rating, rectifying the Monster Manual's great sin.)

Slightly more disappointing for the big customizers and house rulers among the D&D fanbase are the sections on creating new spells, magic items, and character options. The options for spells boil down to a few sentences saying "Base new spells on existing spells" and a chart for damage. The chunk on creating a new Magic Item gives you much the same advice, but does give you a bit of math on what kinds of power should go along with what rarity of magic item. The chunk on creating new character options is realistically misnamed, because it's much more like a list of ideas for what you might want to change, or ideas for changes you can make without breaking the game, for races and classes. There are two really invaluable rules in here, the section on changing spells-per-day into Spell Points, and the section on creating new character backgrounds are both short, sweet rules sections that don't disappoint one whit.

So How Does It Stack Up?

The truth is that this is a book that's for experienced D&D players of all stripes. Where new players will be better off getting a Player's Handbook and a D&D Starter Set, this is the book that'll likely win back players of older editions or other games into the D&D fold not with new flashiness, but with familiar tricks. True to the mission of 5th Edition, this book lets you play your kind of D&D and not anyone else's. As a veteran player, this book drew me in like neither of the others, making me want to really get a campaign off the ground as soon as possible. It's packed with possibilities not in the form of how-to precision mechanical customization or corner case rules for every moment, but in the form of guidelines about how the existing rules work and how you can make them work for you. To that end, the book is stretched thin, introducing new content and going back over the content of the other two books to cover gaps and turn over loose stones. Some folks will likely get what they want in an inevitable DMG 2, and some won't ever be satisfied until they have concrete rules for everything, but that's the real question about this game now. I want more, this book made me want more, so where does D&D go now?

Bottom Line: The DMG s greatest strength is its greatest weakness - it covers so many useful topics that it has to do some of them a disservice.

Recommendation: It s a must-buy book for 5e players, but I don t expect I had to tell you that. If you're still fence-sitting on this edition of D&D, leafing through this book will tell you whether you can twist it into something you want to play or not.