The Dungeon Master's Guide released a month ago, and after a month using the book we've concluded that the core game of 5th Edition Dungeons & Dragons is complete. That's not to say that the DMG is the end-all be-all for the 5th Edition system, it's very useful, but has limitations that hold it back. It's not the full-scale system toolbox that many were hoping it would be, and its customization advice is just that - advice, not mechanics - in some places. It also lacks vital information on teaching new players to DM, glossing over that subject in favor of content more immediately useful to experienced players. Things like randomizing adventure seeds, coming up with interesting non-player characters, creating custom monsters, and adding firearms to your game are at the fore of this book, broken down into three parts: Master of Worlds, Master of Adventures, and Master of Rules. Each of those segments has a few chapters, each completely packed with content to the point that art is comparatively rare outside of the magic items or monsters sections.That's not to say this thing is sparse, or ugly, the book is wonderfully edited, well laid out, and beautifully directed - and it sports a good index to boot. However, on finishing the book it's clear that while many critics - myself included - thought that this system would hinge on the DMG, the DMG just confirmed what we already knew D&D 5th Edition to be. This is a living history of D&D, a collection of what the game has been so far. Perfection, not innovation. Options, not prescriptions. 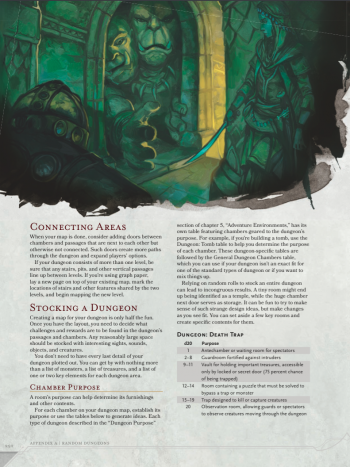 The first major part of the Dungeon Master's Guide deals exclusively with creating a world and a campaign to play in it, running from major ideas like how magic fits into a fantasy world to which potpourri of deities you'll be using when you play. It's a key section of the book, helping new and old players understand where fantasy worlds work, don't work, and can be bent without breaking. Basics like inventing languages, religions, nations, and peoples get two to five pages each. There's also a healthy amount of information about changing D&D's defaults - say there's only one God, for example. How to fit magic into your world gets a brief summary and a few major examples - things like raising the dead and teleportation - to highlight impacts on societies. Once you've decided how your world works, there's a twenty-five page section on "Creating a Multiverse" that, while it addresses making your own worlds in brief, really functions like a miniature Manual of the Planes in explaining the odds and ends of default Dungeons & Dragons cosmology. It's a fun and interesting addition, and should really help newer players to understand the role of characters like clerics or paladins in the greater scheme of things.

Really, despite its other contents, what the Master of Worlds segment addresses is how to play the kind of fantasy you want in the kind of world you want. Its various sections on structuring a campaign, be it an intrigue, adventure, episodic, or sandbox style of game, are invaluable to new DMs and helpful refreshers for old hands. The most surprising and welcome segment of the first chapter is one on "Flavors of Fantasy," telling the various ins and outs of Fantasies you can play with D&D and how you might customize your game to do so. This isn't a short list, either, with segments on Heroic Fantasy, Swords & Sorcery, Epic Fantasy, Mythic Fantasy, Dark Fantasy, Intrigue, Mystery, Swashbuckling, War, and Wuxia. There's advice for both simply changing how you describe actions and going further, actually changing the rules, to adapt towards any of these fantasy styles. This is, perhaps, the most definitive section of the book, saying that Dungeon Masters are not to play the game as it's assumed to be played, but as they'd like to play it.