It started out as such a nice night too. After a long week of drudgery, you've arrived at your ongoing RPG session to unwind with some kind of fictional adventure. But just before you're about to describe the results of your critical success, the front door is torn from its hinges and the undead enter your sanctum. You quickly rise with the rest of your group to defend yourselves, using chairs as improvised weapons. One player grabs the display broadsword from its nearby case and leaps into the undead horde.

You've always wondered what would happen when the zombie apocalypse broke out, but you didn't expect it happen like this. Pushing back undead corpses is a lot more exhausting than it looks in the movies. What's more, the GM's throat was torn out during the battle, and he lies in a pool of blood on the ground. You call 911, and a recorded message tells you all dispatch operators are occupied. Someone checks the news on their smartphone, and there are reports of cannibal attacks throughout the city.

You turn your head, and see the GM rise from the ground, glaring at you in rage. What are you supposed to do now?

The End Of The World is the latest RPG from Fantasy Flight Games, built around a single premise: How would you and your tabletop group fare if the end times began while you sat down to play? The full series will cover everything from robot uprisings to alien invasions, but this first volume kicks off the most talked-about scenario of all time: The inevitable Zombie Apocalypse. 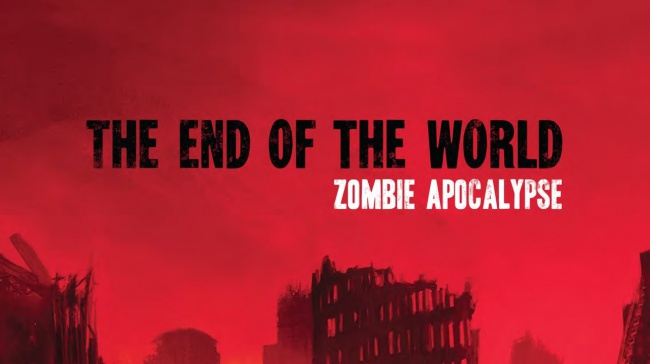 SO YOU THINK YOU CAN SURVIVE A ZOMBIE APOCALYPSE 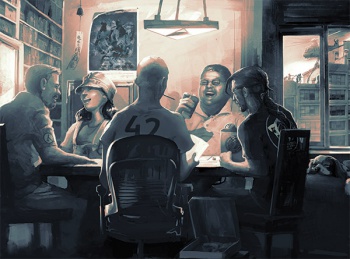 The End Of The World's meta approach starts right when everyone sits down at the gaming table. Gamemasters are encouraged to treat the very table the players sit at as where the apocalypse begins... usually at the expense of the GM's character. It's hard to imagine any campaign being more meta than that, and while you certainly could design original characters, it is part of The End Of The World's appeal. (In our first game, I had the players roleplay in-game for two minutes before zombie rats tore through the roof and ate me alive.)

While building a version of yourself isn't something many players are used to, The End Of The World's creation system is very easy to grasp. The entire system breaks characters down into three categories: Physical, Mental, and Social. Each category has an offensive and defensive component, giving you a total of six characteristics: Dexterity, Vitality, Logic, Willpower, Charisma, and Empathy. When creating a character, you start with one point in each characteristic, and have another ten points to spend in what you think is an approximation of your own abilities.

Next, players come up with features about themselves. In game terms, features are words or phrases that describe an aspect of your character that can't be determined by numbers alone. (If you're already familiar with the FATE System, just think of these as Aspects.) Each player needs one positive and one negative feature for each of the three categories. For example, one player could be a "Distance Runner" but also have a "Weak Stomach". Another could be a "Natural Leader" but have "No Sense of Direction". You're only limited by your imaginations here - in our own sessions, one player was able to put her "Sweet Dance Moves" to good use.

Perhaps the best creation feature is starting equipment, which works like this: If it's on your person or is within reach, it counts as your gear. The End Of The World has rules for using just about everything as equipment, even listing damage ratings for improvised weapons. Everything from the amount of money in your wallet to the remaining battery charge on your cell phone can be taken into account.

Of course, that means the type of geek who enjoys playing Zombie Apocalypse has a distinct advantage - They probably already have weapons or supplies on hand that get them through the initial outbreak. In my own sessions, players had tactical armor used for paintball, hunting knives and equipment, and more. Which doesn't even get into the fact that our host spent rather lengthy periods of time coming up with zombie plans. That said, since The End Of The World distinguishes between improvised and actual equipment, armchair survivalist gear may not work out like you hope. But seeing how it turns out is part of the fun.