A legion of blood-soaked demon devotees clash with the lightning-blooded constructs forged by an immortal god-king, every swing of their weapons shakes the ground they stand on, and every clash echoes through the mythic realms they battle over. This is the sort of story that Warhammer Age of Sigmar seeks to tell, the stories of powerful warriors doing battle in epic conflicts. And it does tell those stories... sort of. It's a fast-playing set of miniatures skirmish rules that, while a bit rough around the edges, can have players up and going within a handful of minutes - but fails to capture a tactical richness you might want from a game with such gorgeous (and expensive) models. Sadly, the rich lore and gritty human stakes of the Warhammer Fantasy world are absent from the game as well, rebooted away in favor of a "epic" scope that feels forced. This is a high quality, very well produced introduction to what is ultimately a middling game. 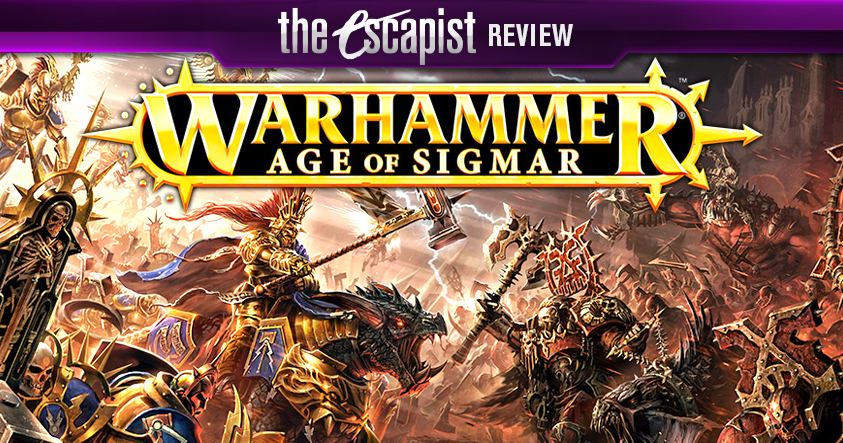 The old Warhammer Fantasy world as you may have known it is gone following the extended apocalyptic Warhammer Fantasy Battle event that Games Workshop just wrapped up. The new world, explained in a decent quality full-color softback book that also includes rules for the figures and the scenarios, is a bit confusing for newcomers. There used to be another world, but now it's gone, and Sigmar went flying off through space on the hunk of rock it used to be. Then he met a giant space dragon and they became friends, and the dragon showed Sigmar that there were some D&D-esque planes, err, sorry, Realms for the remnants of mortal society to live in alongside their gods. Peace followed, until, of course, The Forces of Chaos showed up and started wrecking everything. In response, Sigmar and some other gods and god-kings made an army of immortal warriors to go fight them.

If you're not deeply steeped in the last few years of Warhammer lore, well, you won't get it. Frankly, it's mostly contextless fantasy gibberish until lots more books of lore come out explaining it - and I'm not sure it's particularly creative and unique gibberish compared to what it's replacing. Immortal Faceless Dudes vs. Immortal demons, and both sides respawn if they die. Not clear what the stakes are that I'm supposed to get invested in here, but, well, hopefully you're here for the cool models and the game, not the fascinating and deeply engrossing lore.

The new miniatures included in the set are absolutely top of the line, well sculpted, and impeccably produced. With a total of forty-seven figures, it's an easy month's work for dedicated single-figure painters or some weeks for speed painters. Six of those figures are unique individual characters, while the rest are troops that are mostly unique among their like, but not as detailed as the characters are. The hard plastic they're made of is very solid, and the sprues a high enough quality that you don't have to worry about too much dimpling or other damage while removing and assembling them. The large pre-molded pieces each figure is composed of have one drawback, though, since the standard poses are so dynamic, there's not that much opportunity for conversion on many of the standard soldiers. When a figure's torso, head, legs, and one of its arms are all one piece, your job of priming and painting is easier, but cutting it up for re-posing is a much more significant job. 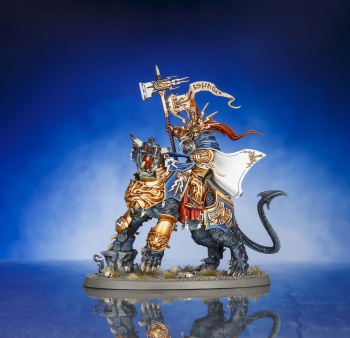 Exceptional among the figures are the characters, like the Stormcast Eternals' Lord-Celestant and its mount, or the Mighty Lord of Khorne and its daemonic dog buddy. The sheer detail on the pieces is something that I expect will attract even non-Age of Sigmar collectors to this set, simply to have something statue-quality to paint. On the other end, there are twenty of the Khorne army's Bloodreavers and ten of the Stormcast Eternals' Liberators in the box, and they don't have much to recommend any individual model over another - so buying more than one box probably won't do much for you unless you don't mind pretty exact duplicates. (Remember, the opportunities for conversion here are low.)

For those looking at these models for other games, it's worth saying that they're very clearly not quite standard 28mm scale. Standing alongside figures from the older Warhammer Fantasy range, they're about a head and shoulders taller, and the Stormcast Eternals stand even taller than a Warhammer 40,000 Space Marine Terminator. It's not noted on the set's box that they're not "standard" scale for this sort of game. I'd expect them to be in-scale with the future range of Age of Sigmar miniatures.