Warmachine Reckoning is the latest release from Privateer Press for their flagship game Warmachine. For those of you who are unaware of how new releases and books work for Warmachine, I figured it would be prudent to take a few moments and explain what the book represents and what it is before breaking down the new goodies players can look forward to in this release.

Like many other miniatures games, each faction or force in Warmachine and Hordes has an army book. The books contain all of the background for the faction, what players refer to as "fluff" or the story of the force, as well as all relevant data for each of the units available. However, as time marches on and things change the books become not so much outdated as they require supplements to stay up to date. The base stats and rules remain the same (for the most part, barring errata or edition changes), but new units are released, new characters, new theme forces and new fluff. Most other game companies simply re-print the army book to contain all this data, invalidating all of the older editions. Privateer Press, on the other hand, releases update books that cover all of the new rules and models for every faction in one book, while at the same time advancing the narrative of the world. Back when we first touched on what is colloquially known as WarmaHordes, I talked about how this is a living game world and the narrative is constantly advancing. This is still true, and releases like Reckoning are exactly where they march forward. Here, the story and units are focused around the Warmachine factions, with a release later this year for the Hordes players. 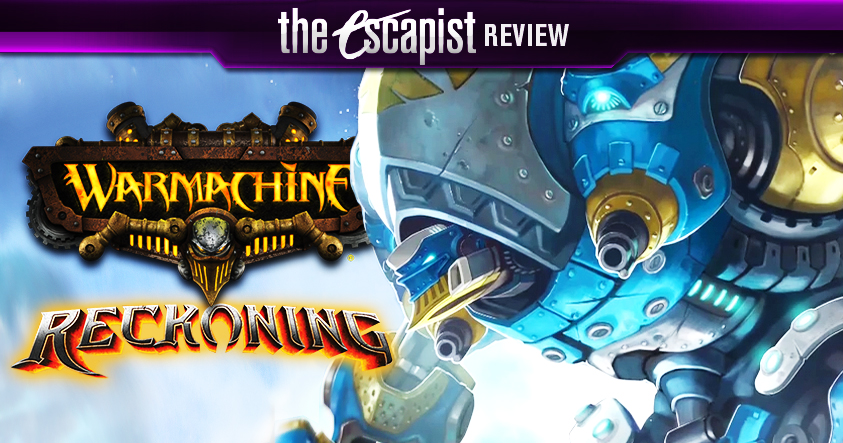 The book is 115 pages long, comes in both hardcover and softcover, and is beautifully printed in full color. There is a large selection of new art as well to accompany the new rules and units. The pictures range from full spread battles, images of the new casters and colossals, to concept sketches for models that haven't yet been released or fully conceptualized. One of the interesting things about these books is the inclusion of the concept sketches and art, which allows players a bit of insight into the design thought and process of the artists and designers. Most game companies tend not to include those types of items in their book releases, or if they do, they sell them as their own individual book.

The start of the book opens like all others that Privateer Press has produced, in which you are treated to part one of a story that encompases the theme of the book. Here we show the united forces of Cygnar, Khador and Menoth in a tenuous alliance against the necromantic army f Cryx and the new Mercenary Contract, Cephalyx. It is a story that harkens back to the roots of the game, and reminds you of the root of the conflict between the four main Warmachine factions. They were the first, after all, and a lot of events throughout the game world's history have been caused by these four groups. It's also a great primer if you are unfamiliar with the story of the world, as it spells out the deep-seeded animosity, the state of the current war, and how the lines are drawn. It's a handy primer for those looking to get started in the Warmachine story without having to do too much backtracking.