The Cypher System started as Monte Cook's new RPG ruleset, appearing in the critically acclaimed Numenera and The Strange. While both games were great fun in their own right, the Cypher System itself was the real joy, taking the emergent gameplay of mechanically complex RPGs and blending them with the narrative flow of new-school games. Now the Cypher System Rulebook has refined and expanded the concept, letting you run games in any setting you can imagine - from default fantasy, to superheroes, to large-scale spaceship battles. 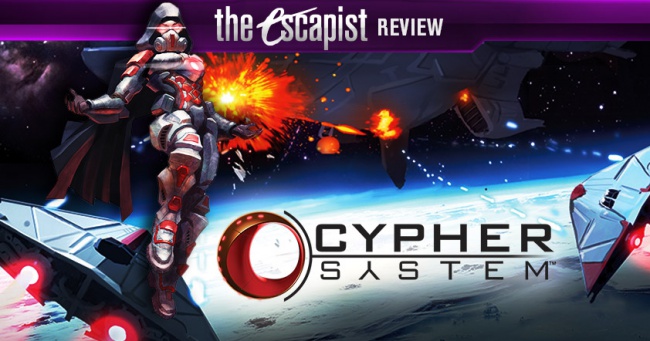 The goal behind Cypher System is to offer rich mechanics that everyone can understand - players should never fuss with complex math while making dice rolls, and double-checking the book for necessary rules should be rare. Many systems make this claim, but few pull it off as effortlessly as Monte Cook Games has with the Cypher System. Take character creation. In the Cypher System, players don't roll for attributes, tally up skill points, calculate defenses, or feel obligated to develop certain abilities over others. Let me sum up the entire character creation process for you:

Seriously. That's it. You've pretty much made your character. Those three blanks come from lists of descriptors, character types, and focuses, which the GM prepares to reflect your setting. So instead of crunching statistics and trying to design the "right" character for a game, you can just string together traits that interest you. Want a "Graceful Psychic who Hunts Nonhumans"? Go for it. How about a "Clumsy Explorer who is Idolized by Millions"? Sounds good to me. "Mystic Bard who Builds Robots"? All yours.

Each trait within your phrase comes with various abilities that you mark on your character sheet - such as which weapons you can use, supernatural abilities you have, even interpersonal relationships with the rest of your party. There's even room to customize types - Cypher's answer to classes - with "flavors" that grant new abilities. If you think the Adept could use more combat abilities, or want to design a custom class for a particular setting, flavors will let you do that.

In other words, you can have a huge range of unique characters and parties with minimal fussing over stats and mechanics. What's more, character types are robust enough to be mechanically unique, but general enough to fit into any setting. Warriors work equally well as chivalrous knights or battle-hardened space troopers. Adept powers can come from magical sources or latent psychic abilities. Flavors just let you customize abilities a little further without unbalancing your character - all while helping them reflect your chosen setting.