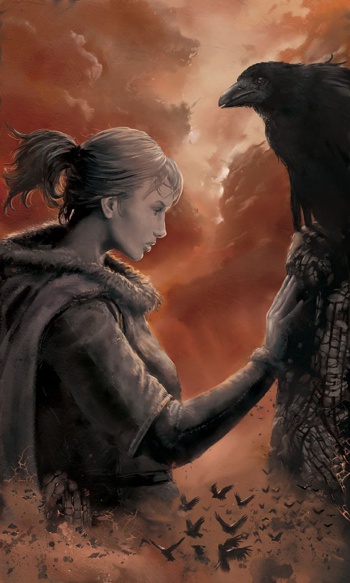 Described as a cross between Ravenloft, Game of Thrones, and Call of Cthulhu, medieval horror tabletop RPG Shadows of Esteren is heavy - very heavy - on the lore and flavor, light on the mechanics, and perfect for those seeking a story-driven experience.

I'm a fan of horror. Movies, novels, games - you name it. But as anyone who has attempted to run a horror-themed tabletop RPG campaign can testify to, it can be difficult to pull off horror successfully, especially if the game system isn't designed for it.

Take Dungeons & Dragons, for instance - oh, I hear you groaning already, "There are tabletop RPGs other than D&D, you know!" Yes, yes, but D&D is the golden standard that most gamers are familiar with. Outside of low levels, it becomes increasingly difficult to capture the feeling of powerlessness that is often integral to the horror experience - the system is designed as a power fantasy. But in Shadows of Esteren, you don't take on the role of an exceptional individual predestined for greatness - you're an average Joe trying to make your way in a harsh, unforgiving world roiled in ideological tension and the constant threat of a mysterious, supernatural terror.

This review will discuss Book 0 and Book 1 of the system - the free prologue and the main book detailing the game world and mechanics of Shadows of Esteren.

Book 0 establishes Shadows of Esteren as "a medieval role-playing game with a horrific and gothic influence," and everything about its magnificent presentation captures that spirit, from the dark and ominous cover and interior art, to the celtic-themed page decorations. With production values this top-notch, it's difficult to believe Shadows of Esteren
is the product of an indie team.

The prologue goes on to lay out Shadows of Esteren as a low-fantasy universe, a game about discovery and investigation of occult secrets. While players will have limited access to magic, there are no wizards casually lobbing fireballs across a battlefield in this world, and magical healing is difficult to come by. The thrill of progression doesn't lie in mechanical advancement, but in advancing through the story and learning more about the mysteries of the setting. To wit, Shadows of Esteren is not for powergamers.

The rules-light system is touted to be "intuitive," but my group of seasoned D&D players often found itself stumbling about for rules clarifications. Part of the issue seems to be with the translation - Shadows of Esteren was initially developed in French, and while the English translation is by no means incorrect, it does tend to use esoteric words that are not part of the common vernacular - something a non-native English speaker wouldn't realize. For instance, the game's skill system offers a list of skills that are meant to be interpreted a little loosey-goosey, with a lot of wiggle room with respect to whether a skill applies to a given situation or not. But when your players are staring at their character sheets and see a skill called "Erudition," it won't be intuitive to most that this skill is, for all intents and purposes, "Knowledge."

The other issue may simply be that our combined decades of experience in a very rules-heavy system led us to look for comparable rules in Shadows of Esteren, and often, there simply was no corresponding rule. In some ways, it was freeing - particularly in combat. Rather than play out as a miniature tactical combat game in which optimized plays must be executed with chess-like finesse, the entirety of the combat system effectively boils down to "roll to attack" - or at least, the simplified combat system that Book 0 introduces. Book 1 adds more nuanced options to this system, but the goal is to make combat a vehicle to character-driven drama, rather than the destination.