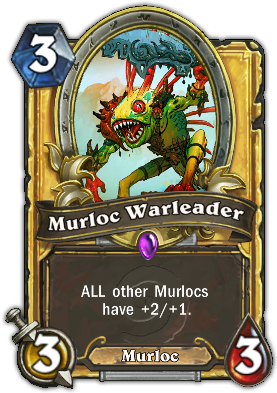 If you've been playing Hearthstone: Heroes of Warcraft for a while, or even if you're just joining the fun now that it's live, you're probably familiar with the idea of Rush decks. These decks are designed to knock out the opponent's life total as fast as possible, sometimes as early as turn four or five. While Rush decks aren't as prevalent in the higher ranks, they're all over the place in the low-to-mid Ranked play. They're easy to build, easy to play, and highly effective, making them a great option for folks grinding wins or just getting started. It's not too hard to combat this strategy, but if you're unprepared, you're going to get eaten alive.

Rush strategies typically rely on many small creatures to deal persistent damage starting early on. Today, I'll be talking mostly about an old favorite, which has recently fallen out of favor with the buff of Unleash the Hounds, Murloc Rush. (Mrglglrglglgl!) That said, these anti-Rush strategies are largely applicable across the entire spectrum of Rush decks.

While the obvious solution is big Taunt guys, the reality is that you simply don't have that much time. Unless you start removing the threats early, you'll rarely stop the assault cold with a single Taunt minion. That said, the four-mana Sen'jin Shieldmasta is a great roadblock so long as you're not relying solely on him to staunch the bleeding. Taunt should be your last line of defense, though. The best defense, as they say, is a good offense.

Taking out the early threats and buff guys is a big part of not instantly losing to Murlocs and other Rush decks. Area of Effect (AoE) spells can either clear the board, or buy you some much needed time to draw into your answers. Many AoE spells, like the Mage's Flamestrike, are entirely too expensive to reliably save you from a rush, so you'll want to focus on things that cost four or less mana. Practically any spell that hits multiple targets is a good bet against rush, like the Warrior's Cleave, the Hunter's Multi-Shot, and the Shaman's Forked Lightning. Full AoE spells are also fantastic, even if they only deal one damage, since many of the rush strategy creatures have only one toughness. To that end, Rogues have access to Fan of Knives and Blade Flurry, Mages get Arcane Explosion, Hunters get Explosive Trap, Shaman get Lightning Storm, and Paladins get Consecration.

While AoE is fantastic at clearing the board very early on, once the buff minions start coming down, they'll stop being very effective. Thanks to Coldlight Seer, for example, even the littlest Murlocs end up too tough for the 2-damage sweepers. If you're running these board wipes, use them early and often, so you don't end up with a surprise Seer ruining your day. This brings us to what may be the single most important point in taking down Murlocs and their ilk. Targeted removal.


Anything you've got in your arsenal that can be used to take out a specific creature is worth considering. Mages, Druids, and Rogues have it fairly easy early on, since their hero ability lets them take out the 2/1 early drops with minimal resources. Warriors and Shaman get cheap weapons like Fiery War Axe and Stormforged Axe, which are fairly effective as well, though the 3-damage Warrior weapon is much preferable because of its ability to take out a Murloc Warleader. Priests should strongly consider Shadow Word: Pain for the same reason. The Warleader turns a small army of pitiful Murlocs into a force to be reckoned with, so removing or silencing him should be your top priority.


When it comes to beating Rush, you've got two basic options: Keep them in check or race them to the finish. If you didn't design your deck to race, you can be sure you won't win that way, so the best bet is to be prepared with AoE and targeted removal. How do you prepare for rush decks? Take to the forums with your own best Hearthstone tips and strategies!