Developed by Totally Games. Published by LucasArts. Released in July 1994. Released on DOS, Mac, and Windows. 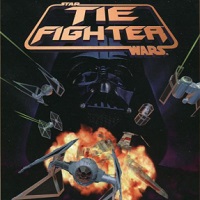 Greg Tito says: Taking everything players loved about X-Wing and twisting it, LucasArts let you play as the bad guys. As a pilot in the illustrious Empire, you fly TIE Fighters, TIE Bombers, TIE Interceptors and even new original spacecraft designed specifically for the game by LucasArts. The whole game is framed with the Empire as a force for law and order in the galaxy with the Rebel Alliance portrayed as terrorists and chaotic forces. As an adolescent interested in unique storytelling, I loved that TIE Fighter played with perspective and put the events of the films in an entirely new light.

Mechanically, TIE Fighter's flight engine was vastly improved from its predecessor and simple graphics changes increased the feeling of immersion. At first, the ships you are flying lack shields so the challenge in fighting superior craft like the X-Wing is profound. You can only take a few hits from laser cannons while your enemies can absorb much more. Eventually, you do get to pilot craft with shields, but they all feel very different from the Alliance ships.

Perhaps the best addition to the X-Wing model was the secret objective in each mission. You would get your briefing from an Imperial Officer as normal, but then you could engage in a conversation with a shadowy figure on the Star Destroyer which would give you objectives above and beyond the main goal of the mission. These orders came from the Emperor himself, and completing them allowed you to join a Secret Order overseen by Palpatine himself. Fail them? And you may displease the Sith ...

TIE Fighter was a fantastic blend of gameplay, story, emotion and reward. It is the greatest space combat sim ever made.

There you go, The Escapist has spoken. Several of these games are available from our friends at GOG.com, but others sadly are lost in the ether of Disney acquisitions and copyright litigation. While you wait for the big titles coming out in the next year, why not check out some of them?

And don't forget other space combat sims that just missed out being on the list.

Here are some honorable mentions that are worth checking out: Sol: Exodus, X3: The Terran Conflict and Strike Suit Zero.