Best Board Game of 2014 Nominees

A game of cuddly fat things, hard shells, and carnivorous climbers, Evolution charmed us and made us wish we could play game after game to explore all the combinations. A straightforwardly vicious game of eat-or-be-eaten, this is one where building a point engine can be secondary to defending yourself from others' stable to freaky creations, but you've got to balance the drive to survive against the need to win.

The choices you make every turn are distinctly satisfying. What will each card you spend be spent on? Which kinds of traits will you exploit before destroying, and which will you keep in the long term? Will you gamble on a few carnivores, or try to defend your herbivores from predators? Most of the choices are straightforward, but the random card draws keep the game varied while not being punishingly uncontrollable. 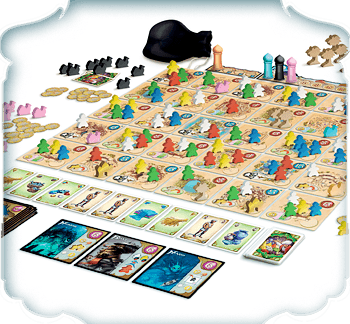 Board game trendsetters Days of Wonder don't often create a game for "Hardcore Gamers" in the tabletop sector, those seekers of games about points, scoring points, and nothing but the points, but when they do you should sit up and take notice. Five Tribes is their standout game from this year, pushing a strong element of indirect competition with its charming mancala-esque gameplay. When played well, it's a quick game that plays twice in the time most games have only played once, for two more satisfying experiences than you'll have elsewhere. There's not much here to hate aside from a smattering of questionable art direction decisions, and you can't blame otherwise flawless design by Bruno Cathala for that.

You can watch us playing Five Tribes and hear some thoughts right here and you can watch the Shut Up & Sit Down review here. 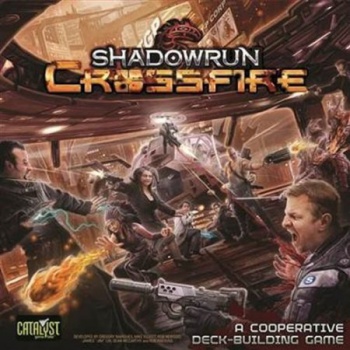 The world of Shadowrun is a favorite of many Escapist staffers, so when we heard about this game from catalyst we were cautiously optimistic. We were rewarded with a difficult, fun game of teamwork and cooperation, where finishing missions gives permanent bonuses (using stickers!) to your runners. Definitely one for the consistent game nights of the world. Where Crossfire really excels is that it's a consistently challenging experience in a world of milquetoast cooperative games designed to be beatable on the second or third try - something we haven't seen since the release of Pandemic quite a few years ago.

You can hear our thoughts on Shadowrun: Crossfire here.


While King's Forge didn't initially blow us away, with repeated plays this game has grown in our hearts to a place of honor. It's fast, fun, and doesn't require too much investment on the players' parts. Plus, you get to roll giant double fistfuls of dice, and who doesn't like that?

It's a blend of small-scale strategic thinking and the immediate satisfaction of deciding how few dice you can keep in your pool to have good odds of making an item well. You'll find yourself throwing out a few dice in early rounds, burning them quickly for a good shot at getting a hard early craft - then you build an engine of dice to spend each turn, accumulating a huge pool that you can use to get rare Magic and Gem dice quickly. Finally, you'll burn that engine out, trying to roll each turn and grab every possible advantage to race your opponents to victory. Occasionally, you'll get foiled by a timely steal on an enemy's part. Sometimes there'll be surprise victories as a player pulls out a surprise win of perfect rolls on a round you decided to build up your pool.