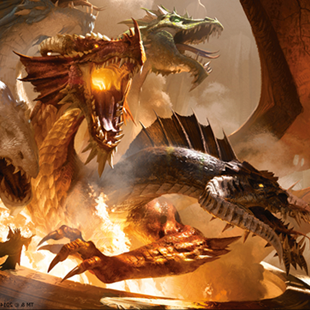 Senior Editor Jon Bolding says: No surprise here, there simply weren't too many games willing to go up against the 500 pound gorilla of tabletop gaming, the venerable Dungeons & Dragons. Besmirched in the minds of many gamers by a divisive Fourth Edition, the Fifth Edition has won back hearts and minds by sticking to the well-trod basics of what D&D is while innovating just enough to please the new generation of gamers. The new D&D focuses on cutting away the cruft of extra rules that the game had accumulated in favor of playing as fast as older editions of the game. With a focus on readable, clear rules and easily understood character options, this might be the fastest playing edition of D&D since 1981, and certainly has as much depth as anything published in between.

The game's core three books are all artfully illustrated and consistently written, with the Monster Manual especially being a lovely book and a master class in how to inspire good adventure. The new mechanics, like the Advantage/Disadvantage system, all make the game quicker and more enjoyable, allowing you to focus on story and not on stacking modifiers to your rolls. Characters have a new focus on background and story elements, filling in parts of the roleplaying experience that D&D has awkwardly ignored for decades. There are problems, sure, and if you're not interested in high fantasy gaming this isn't going to change your mind, but the remarkable completeness of this game's execution cannot be ignored. Nothing has been left out, nothing forgotten, and tradition respected. This is how you make a new edition of a game. It's a model for years to come - years where we'll still be playing Fifth Edition Dungeons & Dragons.